The Murder of Tsar Paul I

The Russian emperor was assassinated on 23 March 1801. 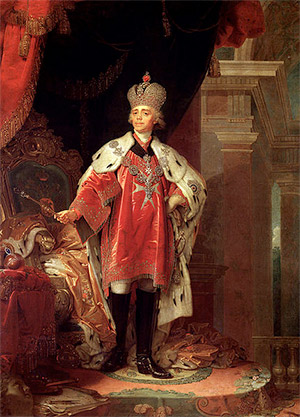 Paul I of Russia was the son and successor of Catherine the Great, who took the Romanov throne away from her feeble-minded husband, Tsar Peter III, and had him killed in 1762, an event which ever afterwards preyed on the mind of their son, then a boy of eight.

The formidable Catherine had little time for her heir. She married him off to a German princess and settled them on an estate at Gatchina, away from the centre of affairs at St Petersburg, where Paul could play at soldiers and hold the meaningless military parades in which he delighted. He admired the Prussian army and was obsessed with exact drill movements and precise details of uniform.

Paul and his wife had a son, Alexander, born in 1777. Catherine had him brought up at her court, and as the empress neared her death, it seemed that she might name Alexander, not Paul, as her successor. However, when Catherine died in November 1796, Paul succeeded at the age of forty-two, put his troops into Prussian-style uniforms and took much satisfaction in reviewing their evolutions outside his Mikhailovsky Palace in St Petersburg at 11am every day. The elite guards officers, forced to take part in these charades, did not enjoy them.

More seriously, the Tsar set about reversing many of his mother’s policies and weakening the influence of the aristocracy. The only grands seigneurs in Russia, he once remarked, were those men who were speaking to the Tsar, and then only for as long as the conversation continued. He tried to lighten the burden on the serfs, at the expense of the landowners, and appointed bureaucrats to run central and local government. To prevent contamination by the dreaded French Revolution,  Paul forbade his subjects to travel abroad and banned the import of foreign books and periodicals. His foreign policy was a disaster and his capriciousness and outbursts of ungovernable rage gave his opponents grounds to question his sanity.

On a cold Monday night in St Petersburg  which was to be the last of his life, Paul hosted a dinner party at the palace. Those present included his son, the Grand Duke Alexander, who ate little and seemed ill at ease. After dinner the Tsar retired to his private apartments. There are conflicting accounts of what happened later, but a group of conspirators led by General Leo Bennigsen and Count von Pahlen, the military commander of the city, were quietly admitted to the palace. Von Pahlen went to Alexander’s rooms, while Bennigsen led a party of guards officers to the Tsar’s suite. The conspirators had mostly had a good deal to drink. They overpowered two valets, broke down the door and went into the bedroom, which was lit by a single candle and seemed empty. One of them said the bird had flown, but Bennigsen felt the bedclothes and said it had not flown far as the nest was still warm. Paul was soon found cowering in terror behind a screen. There was a scuffle in which the Tsar was battered and throttled with a scarf. It was shortly before one o’clock in the morning.

The conspirators had an abdication document for Paul to sign, so they may not originally have intended to kill him. On the other hand, von Pahlen, asked before-hand what would happen to the emperor, had replied ominously that making an omelette requires the breaking of eggs. Alexander, who succeeded as Tsar Alexander I, was certainly party to his father’s deposition, if not to the murder. He had a guilty conscience for the rest of his life.