On February 6th, 1958, the BEA aircraft carrying the players and staff of Manchester United football team crashed shortly after taking off at Munich airport. Richard Cavendish describes the accident. 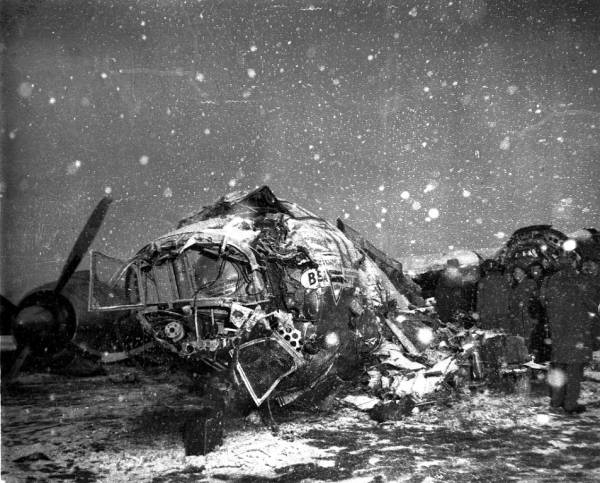 Under their inspiring Scottish manager Matt Busby after the War, Manchester United became one of the most brilliant and exciting football teams in England. They won the FA Cup in 1948 and in 1957 the young 'Busby babes' were the first English Club to enter the European Cup. The following year, on the way back from Yugoslavia and a 3-3 draw with Red Star Belgrade, Busby and his players and staff boarded a BEA aircraft at Munich airport in a driving snowstorm.

There was snow and ice on the runways and the plane taxied out to take off, but returned. The same thing happened a second time. Apparently the pilot was not getting enough power from the engines, but he was determined to go ahead with the flight and at the third attempt the aircraft rose a few feet off the ground and ran into a wooden fence. The port wing hit a building and the plane caught fire. Peter Howard, a photographer on board for the Daily Mail, said that the aircraft suddenly seemed to break up. Seats started to crumble up and everything seemed to be falling to bits. ‘It was a rolling sensation and all sorts of stuff started coming down on top of us. There was not time to think. No one cried out. No one spoke; just a deadly silence for what could only have been seconds.’

Of forty-four on board, twenty-one were killed. They included seven United players and three officials – the team’s coach, trainer and secretary – as well as seven sports journalists. Matt Busby, who was badly hurt, and Bobby Charlton, a future England international, were among those taken to hospital. Charlton had come round to find himself outside the plane, but still strapped into his seat.

The news caused consternation in Manchester, where all sales of tickets for future matches were suspended and crowds gathered at United’s ground at Old Trafford to get the latest information. Messages of condolence arrived from all over the world, including one from President Tito. At a concert in Sheffield, the Hallé Orchestra of Manchester played Elgar’s ‘Nimrod’ as a memorial tribute. The audience of a thousand people stood throughout and there was then a minute’s silence.

United were determined to survive the disaster and ten years later they became the first English team to win the European Cup. Matt Busby, who had been given the freedom of Manchester the year before, was knighted in 1968. Sir Bobby Charlton published a moving account of the tragedy in 2007 in his autobiography, in which he said that he had never got over feeling guilty because by sheer luck he had survived when friends and team-mates had perished.
Sport