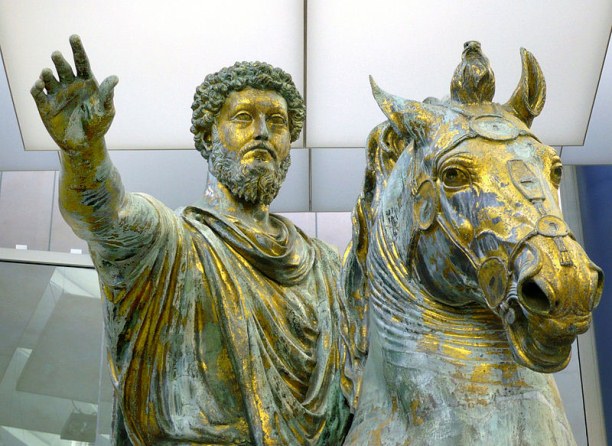 The man later generations looked back to as the ideal Roman emperor had a complicated path to the throne. Born in Rome in AD 121 as Marcus Annius Verus, he came of a family that combined a distinguished record of service to Rome with enormous wealth. His father died when the little boy was only about three and his grandfather took charge of him. He afterwards wrote that from his father’s reputation and such memories as Marcus had of him he learned manliness and moderation. He said that, before his mother also died young, she taught him to be pious, eat only plain food and steer clear of rich people’s ways.

Marcus early attracted the attention of the Emperor Hadrian, who made a pun on the name Verus to call him Verissimus (‘most truthful’). Hadrian had been the adopted son of the Emperor Trajan and now, a homosexual, he himself had no son and needed to adopt a successor. In AD 136, to general disapproval, he chose a man named Lucius Aelius as Caesar. To clear the way, Hadrian ordered all other potential claimants to commit suicide. He then had Marcus betrothed to the new Caesar’s daughter.

Aelius Caesar died only two years later in AD 138 and Hadrian quickly adopted another son, Aurelius Antoninus, a respected Roman senator in his early 50s, whose wife was Marcus’ aunt. He yet again had no son and, on Hadrian’s instructions it seems, he adopted Marcus (which gave Marcus the name Aurelius) and Aelius’ son, another Lucius Aelius, ten years younger than Marcus. He also betrothed Marcus to his own only surviving child, his daughter Faustina.

Hadrian died that same year and Antoninus succeeded him as Antoninus Pius. It looks as if Hadrian believed that Marcus would make an excellent emperor, but needed time and experience. That is what eventually happened, though Antoninus lived far longer than Hadrian would reasonably have expected.

Marcus’ education had been entrusted to the best possible tutors and he became deeply interested in Stoicism, the Greek philosophy which believed in the ability of every human being, regardless of origin, background and circumstances, to live a useful and contented life. It would become his major source of inspiration and consolation.

Antoninus Pius had Marcus move to the imperial palace on the Palatine Hill and gradually began to involve him in the fearsome task of running an empire of about 3.5 million square miles with some 20 per cent of the population of the world. Marcus complained of feeling drowned in paperwork. He shunned pomp and circumstance and disliked living in the imperial palace. However he came to the philosophical conclusion that ‘Where life is possible, then it is possible to live the right life; life is possible in a palace, so it is possible to live the right life in a palace.’

Marcus married Faustina in AD 145. She had a lively temperament and contemporaries credited her with numerous affairs, but he seems to have loved her dearly. By the end of the 140s he was the emperor’s right-hand man. So he remained until Antoninus Pius died in 161 and Marcus duly succeeded at last, at the age of 39. He had waited for more than 20 years and his biographer Frank McLynn calls his endless patience ‘surely the ultimate test of a character and moral fibre’.

Marcus immediately asked the Senate to acknowledge his adoptive brother Lucius Aelius as joint emperor with him. The Senate agreed and this was the first time that such a thing had happened. Lucius married Marcus’ daughter Lucilla and was treated by Marcus, if not perhaps by many others, as his equal. He died in AD 169.

Marcus’ reign saw the empire menaced by what must have seemed an endless succession of threats and invasions along the frontiers, which Marcus and his generals held off. There was also a serious famine and persistent outbreaks of plague, a type of smalllpox, which took millions of lives. Somehow Marcus managed to make time for himself to write, in Greek, philosophical reflections on life, his famous Meditations. When they were first published, in the 16th century, they were more sensibly given the title To Himself. ‘Everything that happens,’ he wrote, ‘happens as it should’ and ‘Nothing happens to any man that he is not formed by nature to bear’. Perhaps his most inspiring maxim was ‘Do every act of your life as if it were your last.’

The emperor won glowing opinions for his intelligence and efficiency, his skill in handling people and his kindness. In the year AD 177 he made his son Commodus co-emperor with him. Commodus would prove to be one of the most vicious Roman emperors ever, but in AD 180 Marcus Aurelius caught smallpox and then starved himself to death at the age of 58. His reign was remembered as a golden age.