Mao was elected Chairman of the Central People's Government on 30 September 1949. 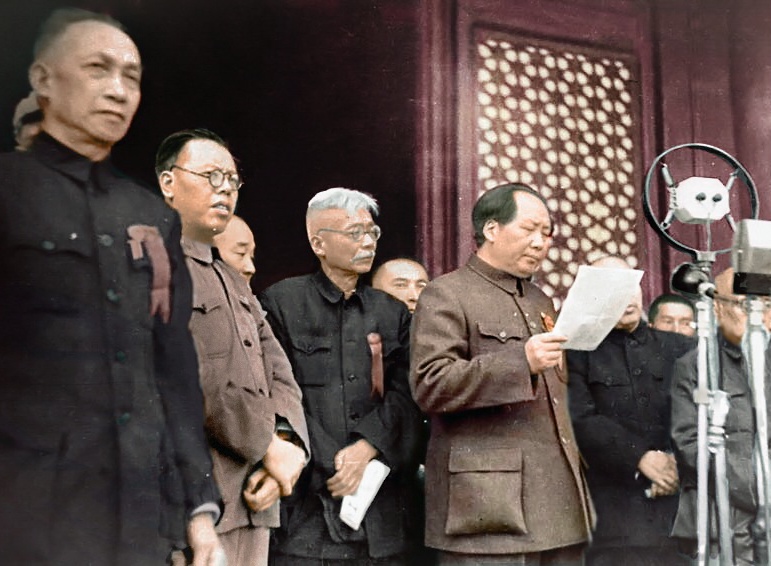 By early 1949 the war between the Nationalists and the Communists in China was nearing its end. The old imperial capital of Peking surrendered to the Communists at the end of January after a month's siege. Mao Zedong, the Communist leader, had earlier remarked in jocular mood that he had always thought it would be wonderful to be an emperor. 'As soon as we enter Beijing,' he said cheerfully, 'I'll be an emperor, won't I?'

The Nationalists had run out of steam and Communist armies took Nanjing in April and Shanghai in May. The Chinese People's Political Consultative Conference was summoned to Beijing, where Mao opened the proceedings on September 21st. 'Our work will go down in the history of mankind', he began, 'demonstrating that the Chinese people, comprising one quarter of humanity, have now stood up… Ours will no longer be a nation subject to insult and humiliation. We have stood up.'

The 660 delegates included representatives of labour and business, cultural interests and overseas Chinese, but the Communists dominated the conference, which swiftly proclaimed the new People's Republic of China and endorsed the 'organic law' of the Central People's Government. Also approved was the new 'common programme', which declared that the era of imperialism, feudalism and bureaucratic capitalism in China had ended, to be replaced by 'the people's democratic dictatorship', which would guarantee freedom of thought and speech, and equal rights for women, and transform China from an agricultural into an industrial country.

The conference selected a new national anthem ('The March of the Volunteers') and national flag, with one large and four small yellow stars on a red ground. The western calendar was adopted and Beijing was to be the regime's capital. On the last day of the month Mao was elected Chairman of the Central People's Government and on the following day, October 1st, he formally proclaimed the People's Republic of China from the Gate of Heavenly Peace in Tiananmen Square.

On a clear, crisp afternoon a crowd, estimated at 250,000, equipped with rippling red banners, heard the 55-year-old leader, dressed in a brown worsted Sun Yat-sen style suit speak into a battery of microphones in his strong southern accent from a balcony high above the square. With Sun Yat-sen's widow and his chief lieutenants smiling approvingly behind him, he pressed a button to raise the new flag on its pole and said, 'It looks great!' as fifty-four guns fired in salute. The war was virtually won, Mao declared, the reactionaries Nationalist government had had been overthrown, and the organic law of the People's Government had been enacted by the Consultative Conference, which represented 'the patriotic democratic elements of the whole country'.

The celebrations that followed started with a military parade and then groups of civilians marched through the square singing Communist songs. They shouted, 'Long Live Chairman Mao Zedong!' and the amplified voice of Mao responded, 'Long Live the People's Republic of China!' to enormous roars from the crowds. There were hundreds of dancers with silken scarves and musicians playing gongs and cymbals, and as darkness fell thousands of lanterns were paraded on bamboo poles. Mao stayed on his rostrum until ten o'clock that night, as fireworks exploded above the heads of the spectators. 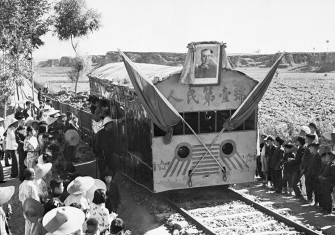 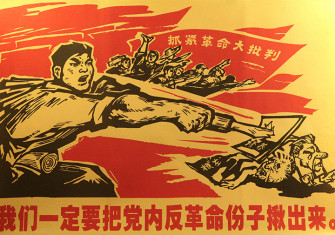