The city burned on 18 July AD 64. Of the early Roman emperors, Nero alone rivalled Caligula in his reputation for sheer unbridled viciousness. 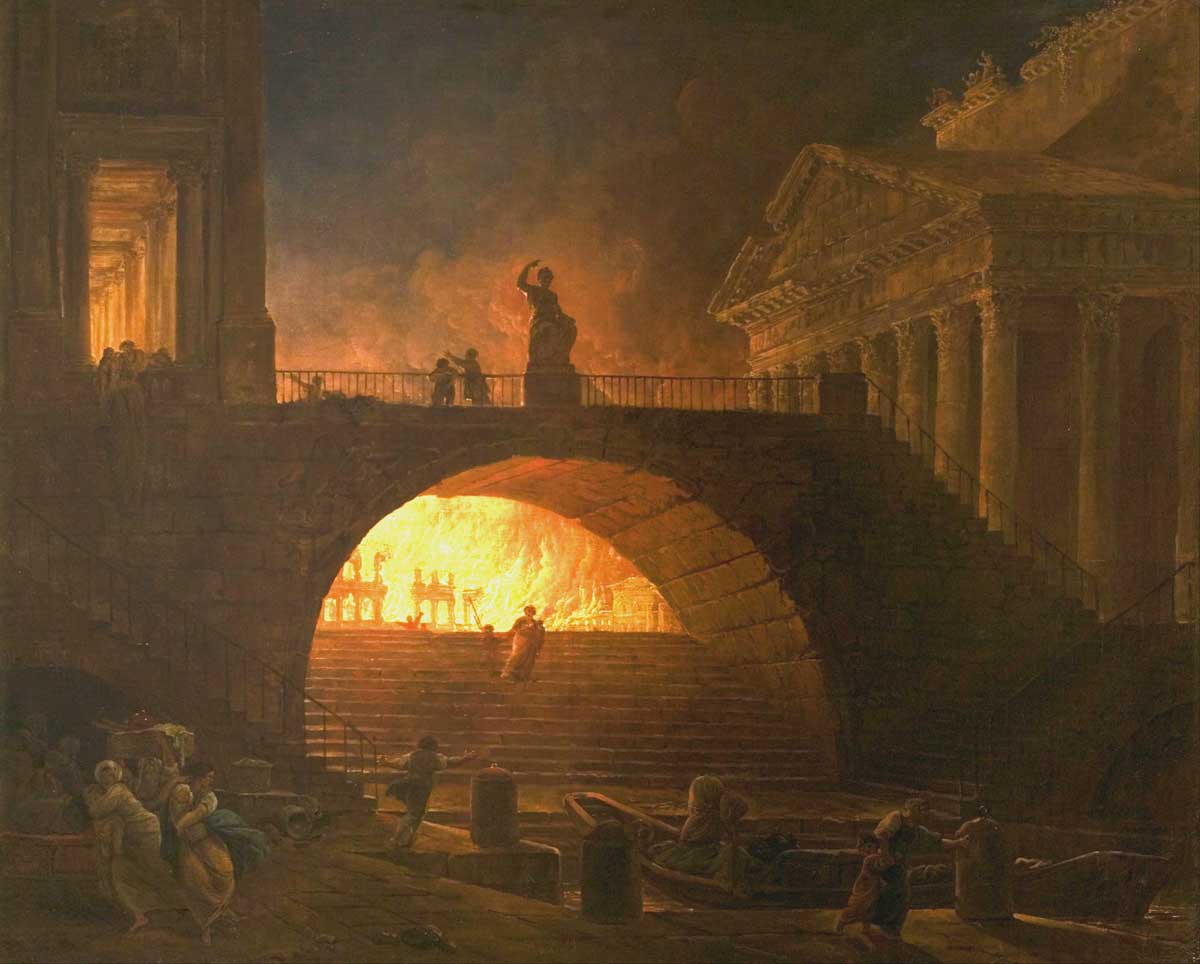 Of the early Roman emperors, Nero alone rivalled Caligula in his reputation for sheer unbridled viciousness. Just 16 when he was proclaimed emperor by the Praetorian Guard in AD 54 in succession to the Emperor Claudius, he had allegedly been born feet-first, which was considered ominous. He seems to have made a promising start, however, under the guidance of Lucius Annaeus Seneca, the Stoic philosopher who had been his tutor, and Sextus Afranius Burrus, head of the Praetorian Guard. He was seriously interested in the arts, wrote poetry and played the lyre and showed off his singing voice in stage appearances. He should have been an entertainer rather than an emperor, in which role he turned into a debauched and murderous megalomaniac. Seneca, forced to commit suicide in AD 65, would be one of his many victims.

The inhabitants of Rome in the year 64 lived mostly in wooden houses and shacks, an easy prey to fire. The earliest surviving detailed account of the one which broke out under the full moon that night in July comes from the Roman historian Tacitus, who was only a small boy at the time. He says that it started in shops at the Circus Maximus, the chariot-racing stadium. Fanned by the wind, it quickly turned into an inferno, raging through the narrow streets and cramped alleys to the terrified cries of the people. Children and the elderly were equally helpless and crowds of confused citizens ran this way and that in attempts to get away, while some died trying bravely to save others. Fire-fighting efforts were hindered by gangs of men, some of whom threw blazing torches to encourage the flames, and it was not clear whether they were looters or, as they claimed, were acting under orders. After five days the demolition of all the buildings in a large space at the foot of the Esquiline Hill seemed to have brought the fire to an end, but it broke out again as furiously as ever and spread more widely still. When it finally died out, most of the city was either completely destroyed or severely damaged.

Tacitus says that Nero was at Antium on the coast when the fire began. He returned to Rome to organise relief efforts. People who had lost their homes were allowed to camp in public buildings, open spaces and gardens. Supplies of food were brought in from Ostia and other neighbouring towns and the price of corn was reduced. Meanwhile, however, word spread that while the fire was raging the emperor had been seen performing on a stage in a private home singing of the fall and destruction of Troy. People began to believe that Nero had deliberately started the fire so that he could then rebuild Rome as a glorious new city and name it after himself.

Tacitus was non-committal as to whether the disaster had occurred accidentally or had been treacherously contrived by the emperor. He said that ‘authors have given both accounts’. Nero did take the opportunity to build himself a new palace, which he called the Golden House, and later historians like Suetonius and Dio Cassius were in no doubt that Nero had been responsible for the fire and had been seen singing exultantly as it burned. Dio Cassius said the emperor had sent out men pretending to be drunk to set the fire alight.

According to Tacitus, Nero was sufficiently disturbed by the widespread belief that the fire had been started on his orders that he picked the Christians to blame as scapegoats. They were believers in what Tacitus called ‘a most mischievous superstition’ that had spread to Rome ‘where all things hideous and shameful from every part of the world find their centre and become popular’. Christians were seized and tortured into confessing, then torn to pieces by dogs, crucified or burned alive and used as human torches at night. A Christian text of the second century proclaimed that Nero was the Antichrist.

Today’s historians generally doubt that Nero ordered his minions to start the fire. Whether he did or not, he had little time left. The increasingly frequent stage appearances he relied on for popularity came to seem ever more undignified. Menacing conspiracies formed against the emperor in Rome, the army was losing confidence in him and there were uprisings in Spain, Gaul and the eastern provinces. In AD 68, when even the Praetorian Guard deserted him, he fled to a villa outside Rome where, aged 30, he committed suicide. He had a grave dug for himself, it was said, and ordered his secretary to help him stab himself in the neck with a dagger. During all this he was crying out Qualis artifex pereo – ‘What an artist dies in me!’