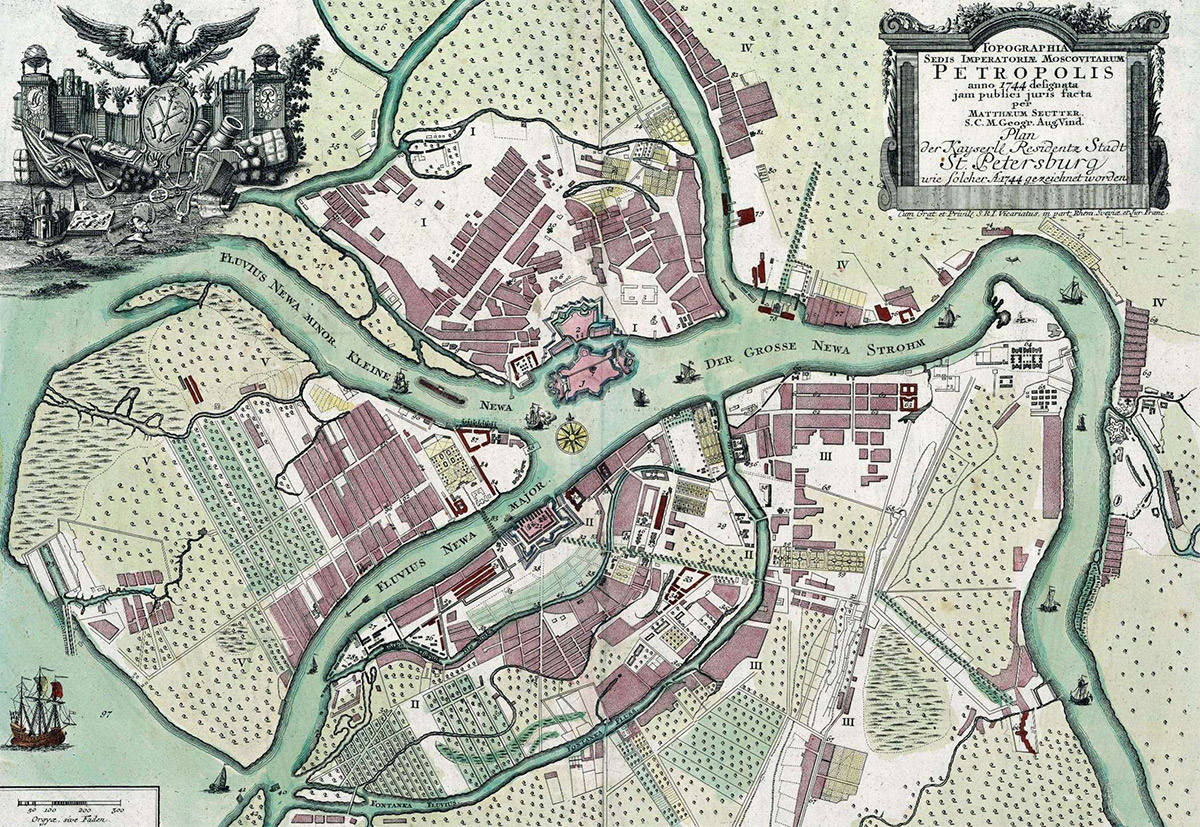 The great Russian city was established on May 27th, 1703.

It was no place to build a city, among the islands and mosquito-ridden marshes where the River Neva debouches into the Gulf of Finland. Damp, windy and prone to floods, St Petersburg has a long winter and the Neva can freeze from November to April, when hardy citizens known as ‘walruses’ break holes in the ice for a dip. Peter the Great’s capital was constructed on piles in the marshes, but so many of the labourers who toiled on it died that it was said to be founded on skeletons.

Peter ruthlessly disregarded practical considerations and human life in his determination to create a new capital for himself and a Russian outlet to the West in an area recently seized from the Swedes, where there were already some small settlements. According to legend, the right spot was shown him by an eagle hovering above it. The Tsar cut two strips of turf with a bayonet and arranged them in the shape of a cross, then made a crucifix out of bits of wood and planted it on the turf, announcing that he would build at this place a church to St Peter and St Paul. The more eloquent later version has him talking of cutting a window through to Europe.

The first house was a little log hut put up in three days by soldiers for the Tsar himself and subsequently preserved as Peter’s Cabin. He lived there in cramped quarters, sleeping on a cot, while keeping a close eye on the construction of his new city’s first main building, the Peter and Paul fortress on an island in the Neva. It was principally a prison and the Tsar had his own son Alexis tortured to death there in 1718. Nearby rose the original wooden cathedral of SS Peter and Paul, where Peter himself was buried when he died in 1725, and almost all the Romanovs after him.

There was also an inn called the Four Frigates and a shipyard where the first Admiralty buildings were erected at what became the centre of the city. As early as 1704 Peter was writing of the place as his capital and insisting that it must be made beautiful with trees and flowers. His New Rome, his ‘paradise’ as he was soon calling it, was built by forced labour. From 1706 30,000 and from 1707 40,000 peasants were conscripted every year and driven across Russia in gangs for hundreds of miles to the site. They were escorted by armed guards, but so many of them escaped that only half at most actually reached the site. Once there, they died like flies from exhaustion, exposure, starvation and disease, to be replaced by next year’s draft.

St Petersburg was intended to wrest the spiritual leadership of Russia away from Moscow and the Tsar employed clerical publicists to puff his new city and identify it with the New Jerusalem of the Book of Revelation. As no one wanted to live in it, however, the New Jerusalem’s population had to be conscripted as well as its labour force. Nobles, merchants and craftsmen were ordered to move there with their entire households and pay the cost of building themselves houses. No excuses were accepted and house sizes and designs by an Italian-Swiss architect, Domenico Trezzini, were strictly prescribed. In the early days prowling wolves ate people who were incautious enough to go outside at night.

Work on the new city gained pace after the decisive Russian victory over the Swedes at Poltava in 1709. The following year a modest summer palace was started for Peter and his second wife, Catherine, a tough peasant girl who stood little nonsense. His huge wind-measuring instrument with its giant dials had a room of its own and there was another for his tools and lathes. Peter imported foreign architects to design his paradise in style with squares, canals and broad, straight boulevards. The Nevsky Prospekt, the longest and most important street, was designed by a Frenchman, Jean-Baptiste Le Blonde, and constructed in 1711 by Swedish prisoners-of-war, who swept it clean every Saturday.

St Petersburg was said to have 50,000 houses in 1714 and it was the first Russian city to have a proper police force. It enjoyed efficient fire-fighting services and street lighting in the best areas and the inhabitants were under orders to plant trees. It was a symbol of the New Russia which Peter had created and under his successors it became one of the most magical cities in Europe.