On 14 December 1702, a band of samurai avenged the death of their master. 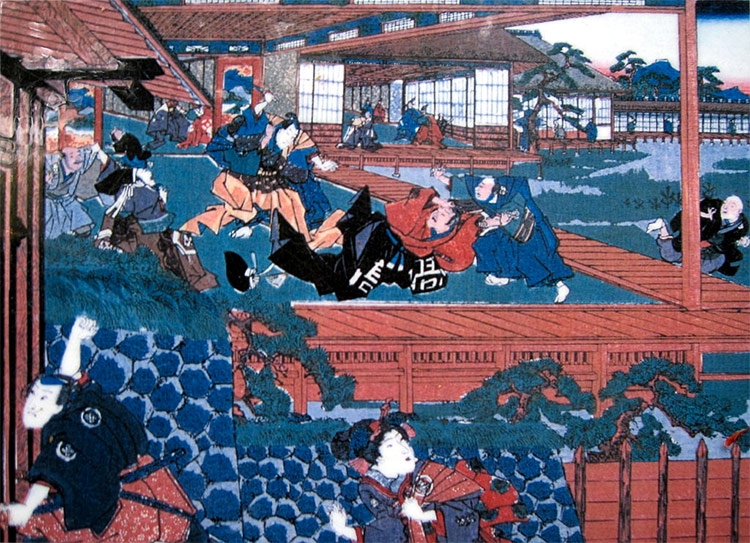 One of the most famous episodes in Japanese history is honoured on the traditional date of 14 December. It happened when Japan was ruled from Edo (now Tokyo) by the Tokugawa Shoguns, with the emperors reduced to a ceremonial role. In 1701 a nobleman named Asano Naganori, lord of Ako, was asked to help carry out certain formal duties at the shogun's court in Edo. An arrogant official named Kira Yoshinaka, however, was so unhelpful and treated Asano with such open contempt that the latter lost his temper, drew his sword and attacked him. This was a grave breach of protocol and Asano was ordered to commit suicide at once, which he did. He was buried in a temple outside Edo and his estate was confiscated.

The forty-seven samurai of Asano's bodyguard, now reduced to the status of ronin, or masterless samurai, decided that their code of honour demanded revenge. Taking to ostentatious idleness and dissipation to put both Kira and the authorities off guard, they waited for almost two years. The oldest of them, who was in his eighties, dropped out, but the remaining forty-six forced their way into Kira's house early on a cold winter morning at the end of January 1703, found him hiding in an outhouse and killed him. In the action they also killed several of Kira's samurai, who defended him bravely. The triumphant ronin cut off Kira's head, carried it in a bucket the few miles to the temple and put it on their lord's grave.

The authorities were in a difficulty. The ronin had acted in accordance with the warrior code, but they had flouted the authority of the shogun, Tokugawa Tsunayoshi, who was best known, incidentally, for his horror of cruelty to animals: he had made it a capital crime to kill a dog. After earnest consideration, the ronin were ordered to commit hara-kiri. All of them, ranging in age from fifteen to seventy-seven, promptly obeyed. They became popular heroes and role models, and their story is a major theme of Japanese theatre, literature and cinema. They were buried in the same temple with their lord and their graves are a visitor attraction in the Sengakuji Temple in Tokyo.