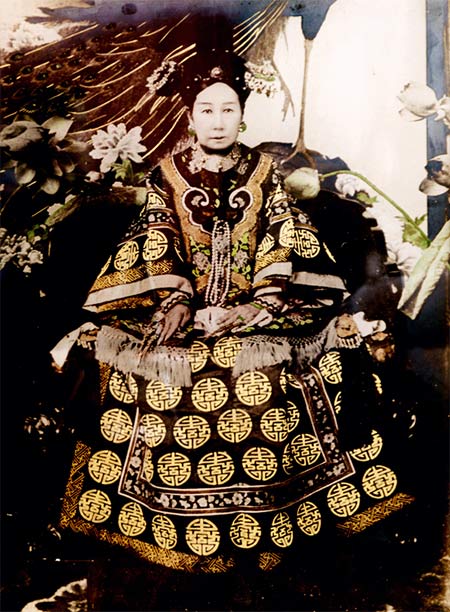 Famed for her beauty and charm, a true friend and a terrible enemy, she was power-hungry, greedy, ruthless and profoundly skilled in the court politics and intrigues of the decaying Manchu Empire. In a life spent largely shut away in Peking’s Forbidden City, where the emperors lived among a numberless retinue of officials, eunuchs, concubines and servants, she knew practically nothing of the wider world.

This may have been less of a disadvantage to her than historians have generally supposed. Through sheer force of character she was the virtual ruler of China for almost fifty years, and in later life people nicknamed her Old Buddha or the Dragon Lady.

Tzu-Hsi came from the middle ranks of Manchu society. When she was seventeen, in 1852, she was one of a bevy of beauties conscripted for the harem of the young but already degenerately exhausted Emperor Hsien-Feng. Tzu-Hsi contrived to attract his flagging attentions and in 1856 she bore him his only son, T’ung-Chih. When Hsien-Feng died in 1861, Tzu-Hsi was still in her twenties and the mother of the new emperor, who was six years old. She survived a plot to murder her, forced the plotters to commit suicide and exploited the situation to the full. Her son, T’ung-Chih, died in 1875. He had begun to resent her and there was a strong suspicion that she put him out of the way. She contrived to continue in power by flagrantly breaking all precedent, adopting her three-year-old nephew as her son and making him the next emperor, as Kuang-Hsu.

In her fifties, Tzu-Hsi ostensibly retired to the gorgeous Summer Palace outside Peking, one of the most beautiful and luxurious places on earth. There she had a huge room filled with ingenious mechanical toys and dolls, an entire wing stocked with her fabulous dresses, and another with her jewels – she had a particular passion for pearls and jade. The emperor, however, contriving to escape her eagle eye, began to institute reforms to modernise and Westernise China’s creaking system. Worse, he planned to confine her to her Summer Palace quarters. Swiftly rallying the support of conservative mandarins, Tzu-Hsi moved reliable army units to Peking to replace Kuang-Hsu’s guards and stormed into the Forbidden City in a towering rage, followed hurriedly by her customary procession of attendant eunuchs. The quaking Son of Heaven flung himself on his knees before her, struck dumb with fright, and she smacked him with her fan – the only blow struck in anger in this extraordinary coup. After making him issue an edict effectively proclaiming her his regent, she confined him to a palace where he could do no harm. Objectionable reformers were beheaded or strangled and the empress resumed the reins.

Many historians believe that Tzu-Hsi’s success put an end to any realistic hope of a modernised imperial China. Surviving alarms and excursions including the Boxer Rebellion of 1900, the Dragon Lady remained in power, keeping the outside world skilfully at bay and China on more or less an even keel until her death at the age of seventy-two in 1908. She retained to the end her silvery voice and winning ways. According to rumour, before her own death she took care to have the emperor, her adopted son, poisoned.