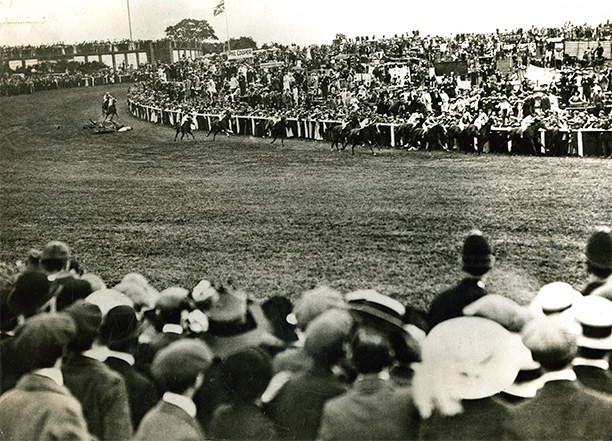 Just what Emily Davison really intended to do that fateful Wednesday afternoon at Epsom racecourse, in full view of the Pathé News film cameras, has been argued about for years. A teacher in her younger days, at the age of 34 in 1906 she joined the Women’s Social and Political Union (WSPU), founded by Emmeline Pankhurst to fight for women’s suffrage. A Christian and a socialist, she was an ardent, militant and sometimes violent feminist, who was imprisoned several times for offences including throwing stones at people, setting fire to pillar-boxes and fiercely assaulting a Baptist minister she mistook for David Lloyd George, the chancellor of the exchequer. During her prison terms she went on hunger strike, was forcibly fed, put in solitary confinement and once threw herself damagingly down an iron staircase as a protest.

On the day before the Derby in 1913 she told a friend she had something on the next day, would not say what it was, but that the friend would read about it in the evening papers. She bought a return railway ticket to Epsom, which suggests she was not intent on suicide. She had two WSPU flags with her and it was long believed that she meant to somehow hang one of them on Anmer, George V’s horse. As the horses came storming round Tattenham Corner at full speed to the final straight, she ducked under the barrier onto the track and was struck by Anmer, which was towards the rear. The horse fell, kicking her and knocking her to the ground unconscious and throwing its jockey before recovering and galloping on to the finishing line.

The jockeys were all wearing their owners’ colours, but there was no broadcast commentary in those days and it has been argued that Emily Davison could not conceivably have identified Anmer. On the other hand there seems to be no evidence that she had chosen the royal horse as her target in any case. Perhaps she picked the one that seemed her best chance. Or it has been suggested that she simply wanted to cross the course, as many spectators did after the horses had passed, and misjudged the moment.

Hurried to hospital in Epsom, Emily Davison never recovered consciousness and died four days later. A spectacular funeral in London on June 14th at St George’s Church, Bloomsbury, involved a procession of thousands of suffragettes, dressed in white and bearing wreaths. The coffin was taken by train to Northumberland and interred the next day in the family plot at St Mary the Virgin in Morpeth before a massive crowd. Her gravestone bears the WSPU slogan: ‘Deeds Not Words’.