The Hungarian Diet issued its manifesto for independence on 14 April 1849. 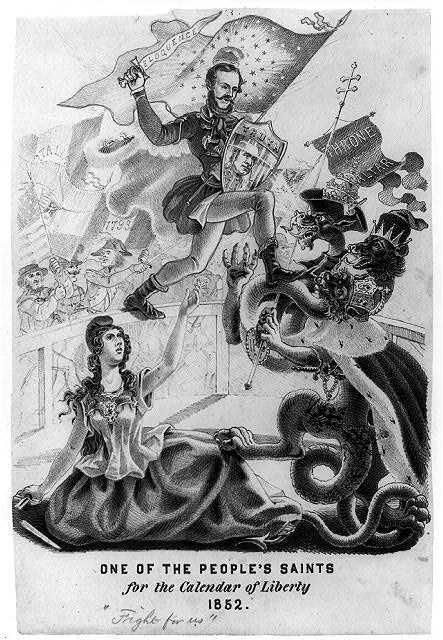 Hungary had been ruled successively by Turkish sultans and Austrian emperors for centuries when the 1848 upsurge of revolutionary nationalism in Europe struck Budapest, where liberty, equality and fraternity were rousingly declared, the single political prisoner left in gaol was freed (a tiresomely loquacious old soul he proved to be) and the Habsburg regime was forced to accept a Hungarian national government. The new, eighteen-year-old Emperor Franz Josef's attempt to regain control was countered the following year by a declaration that 'the perjured House of Habsburg-Lorraine' had broken every tie of mutual obligation between itself and Hungary. 'Therefore the House of Habsburg is for ever deposed from sovereignty over Hungary and declared to have forfeited the throne and to be excluded and banished in the name of the nation.' Henceforth, Hungary was independent. 'We inform all the peoples of the civilised world of this fact,' the manifesto went on, 'in the firm conviction that it will accept the Hungarian nation, as the youngest but not unworthy brother, into the ranks of independent nations.'

The proclamation's author was a radical journalist and agitator of forty-six named Lajos Kossuth, an ardent Magyar chauvinist although himself, ironically, of mixed Slovak and German stock. The Magyars were now in the minority in Hungary, outnumbered by Serbs, Croats, Romanians and Germans, and this was one of the complicating factors in the situation. Kossuth's political pamphleteering against Austrian rule had earned him several years in prison for subversion in the 1830s and the sentence made him a popular hero, though his opinions were too extreme for many of the progressive intellectuals of the day. Elected to the Hungarian parliament, or Diet, in 1847, and a brilliant and inspiring speaker, he demanded the removal of the dead hand of Austrian absolutism as the essential preliminary to political and social reform. Bold, magnetic, resourceful and high-handed, he was appointed minister of finance in the new national government.

When a Croat army invaded Hungary in September 1848 to restore Austrian control, the Diet appointed Kossuth to head the committee of national defence. He organised a surprisingly successful Hungarian army and inspired the mass demonstrations which propelled the remaining rump of the Diet into issuing its manifesto of independence on April 14th, 1849. The Diet now appointed him Governor of Hungary.

The declaration of independence proved to be a mistake, which alienated many previously sympathetic army officers. In June the country was invaded by a powerful Russian army sent by Tsar Nicholas I to Franz Josef's aid. The Hungarian army of peasant nationalists was overwhelmed and in August Kossuth fled to Turkey. Leaving Turkey again in 1851, he was received with tremendous acclaim in London and the United States, but he never regained his influence in his native land where a rapprochement with the Austrians subsequently led to the creation of the Dual Monarchy of Austria and Hungary in 1867. Kossuth himself died an embittered exile in Italy in his nineties in 1894.