Death of Philip the Bold of Burgundy 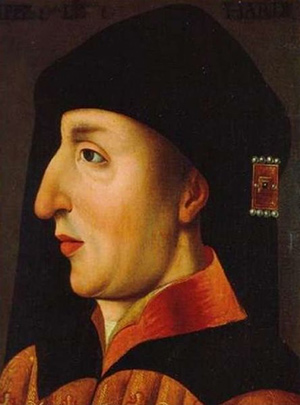 Burgundy was the eventual successor to the old Middle Kingdom of the ninth century, lying between the territories of the West and East Franks, the ancestors of France and Germany. It split into fragments until restored in the later Middle Ages by a line of formidable dukes of the French royal house. The first of them was Philippe le Hardi, a younger son of King John II of France. At the age of fourteen in 1356 he was wounded fighting bravely at his father’s side against the English at Poitiers until both were captured. In England, where he was taken, the young Philip learned falconry and enjoyed playing chess with the Black Prince until he and his father were ransomed in 1360.

At this point the duchy of Burgundy was the area south of Lorraine and north of Savoy, with Dijon as its capital, whose dukes were a branch of the old Capetian royal line of France. The last of them died in 1361 and two years later Philip’s father bestowed the duchy on him and created him First Peer of France. It was a decision future French kings would regret. In 1369 Philip made a crucial marriage to the previous duke’s young widow Margaret, daughter and heiress of the Count of Flanders. His elder brother, now king of France as Charles V, encouraged the match to weaken the long alliance of Flanders and England. The wedding was celebrated in great style in Ghent and afterwards his wife looked after Burgundy when Philip was in France.

When her father died in 1384, Margaret and Philip inherited Flanders. Confusingly, there was a county of Burgundy (the Franche Comté) as well as a duchy. The county now also came to Philip through his wife, along with the counties of Nevers, Rethel and Artois. Philip organised separate administrations at Lille and Dijon for his northern and southern territories, but the First Peer of France had become the ruler of a rich and potentially threatening state on France’s eastern border and he virtually ruled France during the minority of his nephew, Charles VI, from 1380. Philip siphoned off substantial quantities of money from the royal treasury. He loved splendour and understood its publicity value. On one grand occasion in 1389 he was accompanied by eighty knights and fifty squires dressed in green velvet embroidered with the ducal coat of arms. At a royal wedding in 1390, Philip wore a velvet doublet, decorated with forty swans and forty sheep, all made of pearls and each bearing a tiny bell.

In 1388 Charles VI dismissed his uncle and took charge himself, but from 1392 he suffered attacks of homicidal mania and fits in which he would howl like a wolf or insist that he was made of glass. Philip took over again. By this time he thought of Burgundy as a European power separate from France and employed the resources of France in Burgundy’s interests. He and his wife used French money to create a magnificent library, encourage musicians, artists and craftsmen, and to stage spectacular pageants and tournaments. Philip was the patron of the great French theologian Jean de Gerson and in 1401 he helped to found in France an aristocratic ‘court of love’ to promote poetry and honour the female sex. It held its annual dinner on St Valentine’s Day. After his death, aged sixty-two, at the Stag Inn at Halle, Philip’s successors continued the aggrandisement of Burgundy and the creation of the most brilliant court in Europe.