The grandson of William the Conqueror died on 25 October 1154. 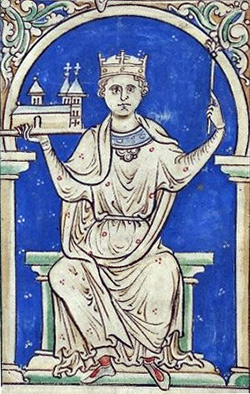 Historians have not given King Stephen a good press. As his biographer David Crouch pointed out, he had the misfortune to come between two of England’s most dynamic and successful kings, Henry I and Henry II. Stephen was an attractive character, chivalrous and brave, cheerful and affable and a fine soldier, but for most of his reign England was dragged through a civil war between him and his rival for the throne, Henry I’s daughter Matilda, later succeeded by her son Henry Plantagenet of the Devil’s brood of Anjou. Eventually Stephen and Henry met at Winchester in November 1153 and signed an agreement. Stephen was to rule the country for the rest of his life, and when he died Henry would succeed him. The treaty, which was formally promulgated at Westminster the following month, was guaranteed by the Church, which undertook to punish any breach of it with excommunication. At Oxford in January the English barons duly did homage to Henry, reserving their allegiance to Stephen.

Now in his late fifties, Stephen was at long last able to enjoy the throne unchallenged and the chronicler William of Newburgh said that ‘it was as if he began to reign for the first time’. There were apparently some at court who feared for their positions after Henry’s accession and hoped to make trouble, but the principal magnates of the realm seem all to have been only too relieved that matters were settled and order was now in prospect.

Stephen made a triumphant progress through the north of England, but he did not have long to enjoy the situation. In October he fell ill at Dover with a bowel disorder and internal bleeding. It became clear that he was dying and his old friend Prior Ralph of Holy Trinity, Aldgate, was called to Dover to attend him at the last. Archbishop Theobald of Canterbury seems to have been there as well. He sent word across the Channel to Henry and took over the administration temporarily when Stephen died at Dover Priory. The king’s body was taken to the Cluniac abbey he had founded at Faversham and buried in the choir. Archbishop Theobald went immediately to London, where lords from all over the country assembled to greet the new king. Everything was so peaceful, however, that Henry was able to take his time. He did not leave Normandy until early in December and was crowned in Westminster Abbey on 19 December.