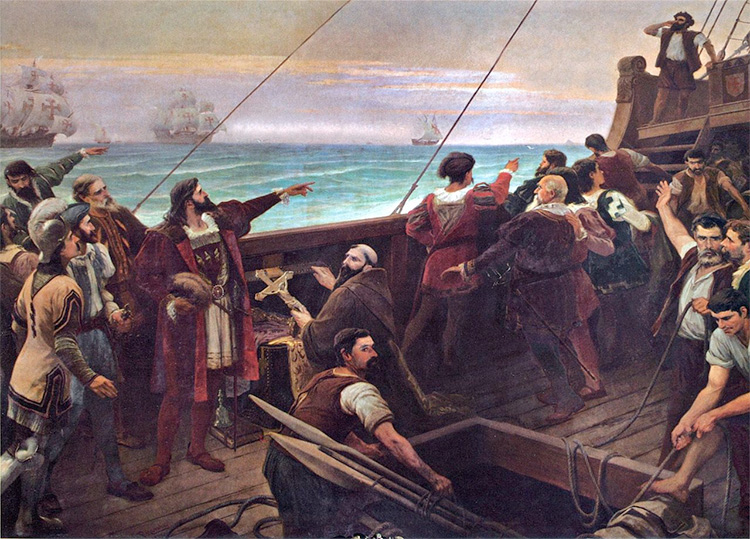 The discovery of Brazil was an episode in the creation of a Portuguese commercial empire which in less than a hundred years extended to four continents. The Portuguese established West African coastal stations from early in the fifteenth century. In 1499 Vasco da Gama returned in triumph to Lisbon from his epoch-making voyage to India round the Cape of Good Hope. In the following year, King Manuel I sent a fresh expedition to India, of thirteen ships and 1,200 men. With da Gama pleading exhaustion, the command was given to a trusted courtier named Pedro Álvares Cabral, still only in his thirties.

After a solemn Mass attended by the king in Lisbon, the fleet left the mouth of the Tagus early in March and sailed south-west past the African coast before turning out into the Atlantic to get the benefit of the prevailing winds and currents. Apparently carried further west than intended, Cabral’s ships crossed the Atlantic at its narrowest point and bumped accidentally into Brazil. This is the generally accepted story, at any rate, though there are suggestions that Portuguese voyagers had secretly reached the South American coast earlier and that Cabral’s landfall was no accident. At least it is clear that the Americas would have been discovered before long even if Columbus had not sailed the ocean blue in 1492.

Cabral and his men sighted the hump of Monte Pascoal on the coast and sailed north for three days to find a landfall near what is now Porto Seguro. A reconnaissance party went ashore on April 21st and the main landing was made the following day, when Cabral formally claimed what he called True Cross Island for Portugal, erected a cross and held a Christian service to mark the occasion. (The territory fell to Portugal anyway, under the Treaty of Tordesillas of 1494.)

The local Amerindian population, still living in the Stone Age as hunter-gatherers and fishers, came out to see their white visitors. What they thought of them is not on record, but the expedition’s official scribe, Pero Vaz da Caminha, gave an account of Portuguese reactions in a letter to King Manuel, which has been called Brazil’s birth certificate. He portrayed a land of burgeoning fertility, populated by childlike naked savages. The male warriors painted their bodies vividly in red and black quarterings. The women were attractive and one had coloured her buttocks and thighs black, while leaving the rest of her body unadorned. ‘Another,’ he wrote, ‘had both knees and calves so painted, but her privy parts so naked and exposed with such innocence that there was no shame there.’

After staying another eight days, Cabral sailed back across the Atlantic to round the Cape of Good Hope and reach Calicut on the west coast of India. Behind him he left two degredados, exiled criminals, who acquired native women and fathered the first of Brazil’s mestizo population, which in time would vastly outnumber the Indians. A follow-up expedition of 1501 under Gonzalo Coelho, with Amerigo Vespucci as its chronicler, explored some 2,000 miles of the Brazilian coast and paved the way for subsequent systematic Portuguese settlement. Cabral, however, was given no further employment. He retired in dudgeon to his country estate until his death in 1520.