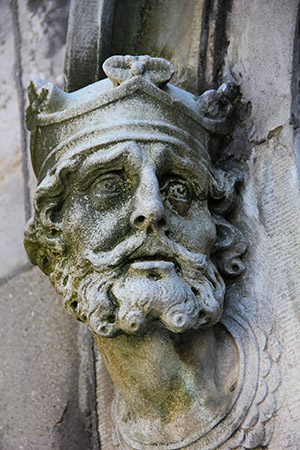 Celtic Ireland in the early centuries AD had more than a hundred kingdoms and sub-kingdoms, involved in dynastic struggles, feuds, rivalries and shifting alliances. The five principal kingdoms, from north to south, were Ulster, Meath, Connaught in the west, Leinster in the south-east and Munster in the south-west. To make things even more complicated, from the 790s Ireland was harried by Viking raids, which in due time led to permanent settlements. The Norse established themselves in Dublin in 841. Other Viking settlements included Waterford, Wexford, Cork and Limerick, while bands of Norse warriors frequently took service with rival Irish kings as mercenaries.

The concept of a ‘high king’ of all Ireland had developed at some uncertain date and although St Patrick and other missionaries converted the Irish to Christianity from the fifth century on, pagan traditions clung to the high king. Usually more of a symbolic figure than a national ruler, he was considered the consort of the goddess of love and war and Ireland, Maeve. Traditionally he was crowned at the prehistoric hillfort at Tara in Meath, where an ancient standing stone called the Lia Fail, or Stone of Destiny, was said to cry out when the true high king touched it, with a shriek that could be heard all over the country.

The greatest of the Irish high kings, famed in saga and legend, was Brian Boru (‘Brian of the Tributes’). Much about him is uncertain and disputed, but he was an unrivalled war leader and the ‘tributes’ seem to mean substantial levies of cattle that he extracted from lesser potentates. He is generally said to have been born around the year 940 in Munster as a younger son of a sub-king called Cennetig (Kennedy in modern English), whose clan controlled part of today’s County Clare, though some sources date Brian’s birth back as far as the 920s. After Cennetig’s death around 960 his eldest son and successor, Mathgamain, ousted the ruling Munster dynasty in 964 and made himself a powerful figure in southern Ireland, until he was murdered by the Norsemen of Limerick in 976.

Brian succeeded as king of Munster, avenging his brother by killing the Norse ruler of Limerick and his sons and going on to defeat all rivals for the throne. By force of arms and force of character he gained control of much of southern Ireland and he had a powerful fleet with which to support his land armies and attack the Norse. In 997 he made an alliance with the reigning Irish high king, Mael Sechnaill (or Malachy) of Meath, and in 999 he took and sacked Dublin, but restored the Norse ruler Sitric Silkbeard to the Dublin throne as his underling, gave him one of his daughters in marriage and took his mother, Gormflaith, as one of his wives – like other kings in Ireland he had several. Mael dominated the north of Ireland and Brian the south, but in 1002 for reasons that are unknown Mael surrendered the high kingship to Brian.

Brian subdued the Ulstermen in the north. He was a generous benefactor and strong supporter of the Irish church, which backed him in return, and he upheld the claim of Armagh in Ulster to be Ireland’s religious capital. He is said to have made a journey round the whole country in 1005 and he was recognised by the lesser kings as the supreme ruler of Ireland.

In 1013, however, Brian was attacked by an alliance of Leinstermen and Norsemen from Dublin under Sitric Silkbeard, who brought in Norse warriors from the Hebrides and the Isle of Man to swell his host. The decisive battle was fought on Good Friday at Clontarf, just north of Dublin. There were Irishmen and Norsemen on both sides and it was a ferocious struggle, said to have lasted all day, but the Dublin-Leinster alliance was defeated. According to one story Brian was killed in man-to-man combat, but the widely accepted account says that, now in his middle-seventies at least, he was too old to fight in the battle and his army was led by his son, Murchad. A small group of Manxmen, fleeing from the battlefield, chanced on Brian’s tent, overpowered his bodyguard and slew him with a battle-axe. ‘The men of Ireland will suffer a grief,’ recorded the Norse Njal’s Saga, ‘that will never grow old in the minds of men.’

Brian’s body was taken to Armagh and buried there in St Patrick’s cathedral and Mael now took back the high kingship. Brian’s son by Gormflaith, Donnchad, later ruled Munster until his death in 1064 and Brian’s descendants, the O’Briens, were powerful figures in Ireland for many centuries.