The author of Les Misérables was born on February 26th, 1802. 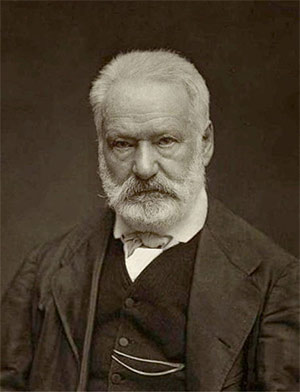 Possibly the most famous French author of all time was appropriately conceived on an exceptionally high plane – ‘almost in mid-air’, his father later maintained, on ‘one of the highest peaks of the Vosges Mountains’. As a hoax a stone memorial was erected in the 1960s at the supposed spot just below the summit of the 3,000 ft Donon peak, high above the Rhineland where Major Léopold Hugo was serving with his battalion in May 1801. Victor Hugo himself, whose motto was ‘Ego Hugo’, preferred to think that he had been conceived higher still, in the Alps, close to 6,000 ft up on Mont Blanc. This meant, his biographer Graham Robb has pointed out, that he ‘came into existence at a major crossroads of world history: even before he had legs to walk on he was following in the footsteps of Hannibal and Napoleon’.

The Hugo family came from Lorraine. Victor Hugo’s grandfather was a wood merchant in Nancy. His son Joseph-Léopold-Sigisbert enlisted in the army of Revolutionary France in his teens. Brave and brash, at twenty-two he met a Breton girl called Sophie Trébuchet. They were married in 1797 and she bore him two sons, but the marriage was not a success. Serving in the Army of the Rhine, in August 1801 Léopold took Sophie to live in Besançon. It was here in an apartment on the Place Saint-Quentin that Victor-Marie Hugo was born, a runt with such a massive head that his father said he looked like one of the gargoyles of Notre-Dame.

Nine months after the boy’s birth Sophie left for Paris, where she became the mistress of a general, while the major looked after the three boys. He was not a good mother, he admitted, and Sophie took the children away to live with her in Paris. In 1807 she and the boys rejoined Colonel Léopold, now in Naples, but in 1809 it was back to Paris again. Sophie’s lover was arrested in 1810. Victor Hugo never saw him again and he was executed two years later. Colonel Hugo had meanwhile become a general and Count of Siguenza and the family went to join him in Spain, but he and Sophie divorced, so it was Paris once more and Victor was packed off to boarding school amid angry disputes over money. At fifteen he was already winning the Académie Française’s approving attention for his poems. He was nineteen when his mother died in 1821 and his boyhood experiences would colour his whole prodigious output of novels, poetry and plays.