On 27 November 1809, a bet between two friends brought a large part of London to a standstill. 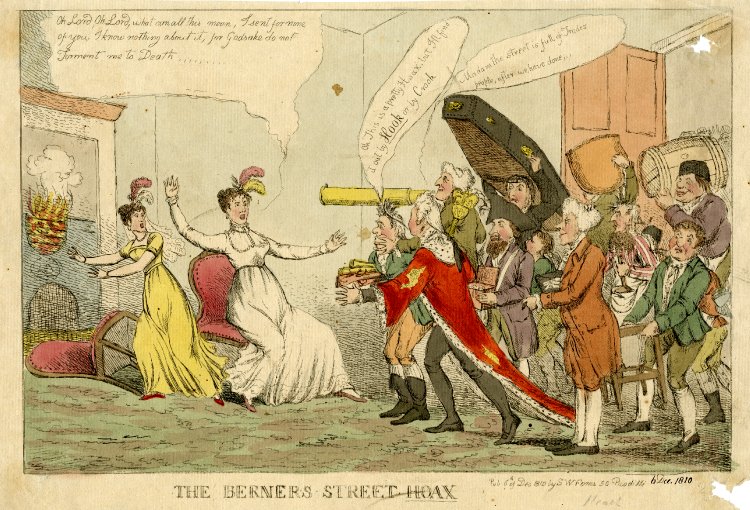 At around 5am there was a knock on the door of 54 Berners Street, an unassuming house just north of Oxford Street, London. It was a chimney sweep, who claimed he had been called to the address. The maid suggested he was mistaken and he went on his way.

A few moments later another sweep arrived with the same story, then another until the exasperated maid had sent away 12 in total. But the sweeps were only the beginning. Next came coal carts, each claiming they had a large order for number 54, something Mrs Tottenham, the owner, assured them she had not requested.

Hot on their heels came the cake makers, each carrying 10-guinea wedding cakes. Then doctors began calling and in their wake came apothecaries, surgeons and lawyers, followed by vicars and priests to minister to the resident within who, they had been told, was dying. Outside, a group of rather bemused undertakers waited with bespoke coffins.

By now the streets were becoming congested, not helped by the arrival of fishmongers, bootmakers, shoemakers, haberdashers, hatmakers, butchers’ boys and a queue of pianos. News travelled and the Governor of the Bank of England, the Lord Mayor of London, the chairman of the East India Company and even the Duke of Gloucester arrived to gawk.

Opposite number 54 Berners Street stood Samuel Beazley, who an astute observer might have noticed handing his friend Theodore Edward Hook a guinea. Hook had undoubtedly won his bet: that, within a week, he could transform any house in London into the most talked-about in the city. To win, he sent out 4,000 orders or requests, to tradesmen, professionals and dignitaries, requiring them to present themselves at Mrs Tottenham’s. In the process he brought a large part of London to a standstill and triumphantly won his wager. Later that day he retired to the country to avoid retribution.