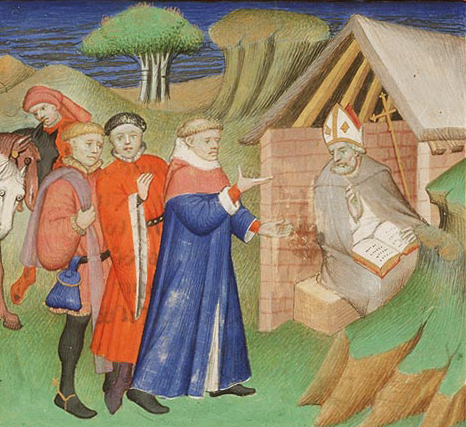 Ethelred the Unready (or the ‘Ill Advised’) became King of England in 978 at the age of ten and new Viking raids on his country began in the 980s. The young king’s principal adviser was Dunstan, Archbishop of Canterbury, a former Abbot of Glastonbury. Another leading counsellor was a protege of Dunstan’s named Aelfheah (or Alfege or Alphage), who may have been a monk at Glastonbury at some point. Not much is reliably known about him, but in 984 he was appointed Bishop of Winchester, where he completed the rebuilding of the cathedral and continued his predecessor’s furthering of the cult of St Swithun. In the 990s he seems to have been involved in making a peace treaty with the Viking leader Olaf Tryggvason, but this failed to stop further Viking attacks.

In 1006 Aelfheah was consecrated Archbishop of Canterbury. He took St Swithun’s head to Canterbury with him and also encouraged the cult of St Dunstan there. In September 1011 an army of piratical Vikings set siege to Canterbury. After two weeks, according to the Anglo-Saxon Chronicle, they were treacherously let into the city. They ransacked it, took Aelfheah prisoner and demanded a payment to go away. The money took time to raise but was eventually handed over to them.

The Vikings returned to their ships at Greenwich but took the archbishop there with them and demanded an additional ransom to let him go. He sent orders that the ransom was not to be paid and during a feast his captors got thoroughly drunk and pelted him with ox bones, until one of the Vikings killed him with an axe blow to the head. And so, the Chronicle says, ‘his holy blood fell on the ground and his holy soul was sent forth to God’s kingdom’.

The body was taken to London and buried in the church of St Paul’s, but Cnut of Denmark became King of England in 1016 and in 1023 in a shrewd piece of public relations he had the archbishop’s body returned to Canterbury and respectfully re-interred on the north side of the high altar, not far from St Dunstan, in a ceremony attended by Cnut’s queen Emma of Normandy (Ethelred the Unready’s widow) and many bishops and earls. The fundamental theme was the reconciliation of Englishman and Dane.

Aelfheah was considered a saint and martyr, portrayed in art with an axe. A church was built and dedicated to him (as St Alfege) at Greenwich, reputedly on the spot where he was killed. Stylishly rebuilt by Nicholas Hawksmoor in the 1700s, it was restored after severe 1941 bomb damage. Those buried there include the Tudor composer Thomas Tallis and General James Wolfe of Quebec fame.