The Abdication of King Farouk 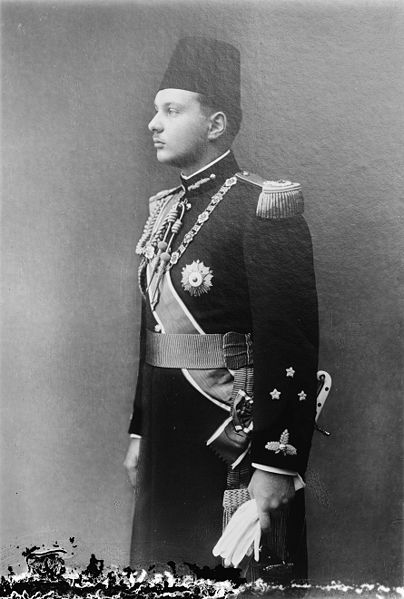 Paunchy, balding and bloated, Farouk was 32 and had been in power for 16 years when he lost his throne. The Egyptian monarchy had been set up by the British in the 1920s and Farouk had been king for sixteen years since succeeding his father, Fuad I, in 1936. Sir Miles Lampson, the British high commissioner, described him in a report to the Foreign Office in 1937 as ‘uneducated, lazy, untruthful, capricious, irresponsible and vain, though with a quick superficial intelligence and charm of manner’. Farouk’s attempts to introduce reforms made little progress against the Egyptian establishment of politicians and major landowners. He also butted his head vainly against the British and by 1949 he was despised at home and abroad as an ineffectual playboy.

By that time a group of Egyptian army and airforce officers was secretly planning a revolution to get rid of both the British and the entrenched Egyptian regime. They had all been stung by ignominious defeat in the Arab-Israeli war of 1948 and they blamed the King, the politicians and the corruption endemic in the system. The Free Officers, as they called themselves, gathered substantial support among the officer corps. Their leader was Colonel Gamal Abdel Nasser and Anwar Sadat was one of them. Many of them had been at the Military Academy in Cairo in the later 1930s and, according to Sadat, a secret officers’ revolutionary society had been founded as early as 1939. Nasser was a teacher at the Military Academy in the 1940s and influenced many up-and-coming young officers.

The Egyptian army had long been controlled by the king, but Farouk’s scandalous and grotesquely self-indulgent lifestyle and the belief that some of his closest associates had profited by supplying defective weapons and munitions to the forces had eroded the army’s loyalty. At the end of 1951 the Free Officers ran their own slate of candidates for election to the board of directors of the Officers’ Club in Cairo. Their candidate for club president was General Mohammed Neguib, one of the few high-ranking officers who had distinguished himself in the war. The King personally endorsed rival candidates of his own, but the Free Officers’ candidates won.

Farouk regarded his election defeat as evidence of a seditious conspiracy in the officer corps, as indeed it was. His efforts to recover control drove the plotters to drastic action. They feared that their counsels had been penetrated by informers and that they were in imminent danger of arrest.

The decision to attempt a coup seems to have been taken early in the morning of 22 July. At midnight, while the court was enjoying a late champagne and caviar picnic in Alexandria, some 200 officers and 3,000 troops took control of army headquarters and put senior officers under arrest. Troops occupied the airport, the Cairo broadcasting station and the telecommunications centre, and tanks and infantry patrolled the Cairo streets. There was no opposition and at 7am on 23 July Sadat announced the take-over on Cairo radio.

Farouk, at his summer palace in Alexandria, has been criticised for not immediately taking command of the troops there. Apparently, he turned that course down for fear of causing civil war and bloodshed. Instead he appealed to the American ambassador for help, but the Americans had no confidence in him and the CIA had been encouraging the plotters, whose armoured columns now took control of Alexandria. The British force in the Canal Zone made no move to interfere. Farouk betook himself to the Ras el-Tin palace by the western harbour in Alexandria, but the coup leaders ordered the captain of his seagoing yacht, the Mahroussa, not to sail without their orders.

Some of the rebel officers wanted Farouk knocked on the head, but early on 26 July, with the Ras el-Tin palace surrounded by troops, he was ordered to abdicate and clear out. He complied, almost in tears, and at 6pm that evening he sailed for Naples with his wife and children, seen off politely by General Neguib to the strains of the Egyptian national anthem and a 21-gun salute. He had to leave a thousand suits and his pornographic necktie collection behind, but with him went crates labelled champagne and whisky which had been surreptitiously packed with gold bars. His baby son, Prince Ahmed Fuad, was proclaimed king and a regency council appointed. In September, however, Egypt became a republic, with General Neguib as president. He was a figurehead who would soon be ousted by Nasser.

Meanwhile, Farouk had made for Capri and stayed, ironically enough, at the Eden Paradiso Hotel to begin with, eventually settling in Monaco. He died in Rome in 1965, soon after his 45th birthday, after collapsing at a restaurant where he had been entertaining a blonde of 22 to a midnight supper. He had once been reported as saying: ‘There will soon be only five kings left: the kings of England, diamonds, hearts, spades and clubs.’