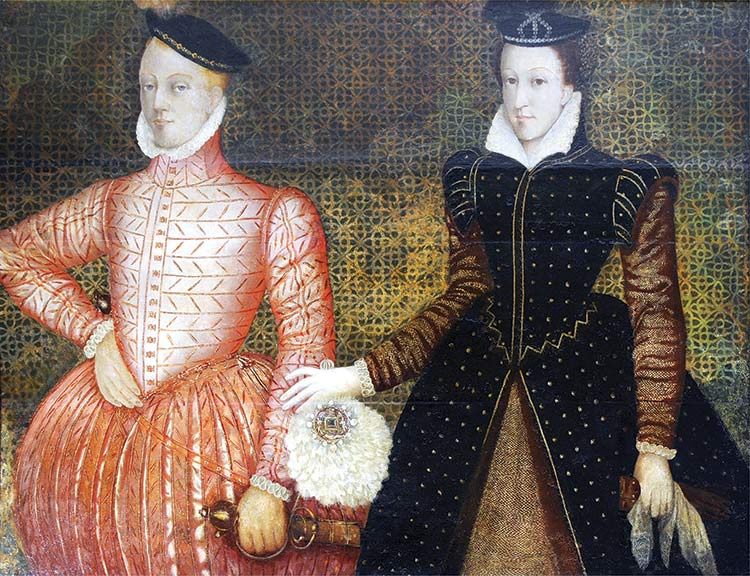 Henry Stewart, Lord Darnley, son of the Earl of Lennox, was descended from both the kings of Scots and the Tudor monarchs of England. He was born in England in 1545, the year in which his family’s Scottish estates were confiscated. They were restored in 1564 and the young man arrived in Edinburgh early the following year. Tall, handsome, highly educated, sophisticated and a Roman Catholic, he almost immediately presented himself to Mary, Queen of Scots, herself a committed Catholic in need of a husband and an heir. Mary told a friend that Darnley was ‘the lustiest and best proportioned long man that she had seen’ and it was soon clear that she had fallen helplessly in love with him. On July 22nd the banns of marriage were called and on the 28th it was proclaimed that Scotland would henceforth be ruled jointly by the King and Queen of Scots. The pair were married the next day.

The wedding was held at 6am that Sunday morning in the chapel royal in Holyrood Palace. The 22-year-old bride in her widow’s black gown was outshone by her 19-year-old groom in an outfit studded with jewels. He placed a diamond ring and two other rings on her finger before leaving her alone for the nuptial mass, which was perhaps the first clear sign that there were significant differences between them. There were plenty more to come, but for the moment trumpets heralded the newly-weds to a lavish wedding feast with 16 dishes of game, chicken and lamb, followed by music and dancing. Then they hurled gold and silver coins in handfuls to the crowd outside the palace and there was another feast in the evening, with another masque and more music and dancing before the happy couple went to bed. Feasts with more masques and dancing followed on the next three nights. After a brief honeymoon away from Edinburgh the newly-weds returned to Holyrood.

Darnley did his duty in Mary’s bed and she was pregnant by September, but she came to realise that he was self-centred, conceited, arrogant and positively dangerous as her consort because he kept intriguing with her Protestant opponents. Their baby son, James, was born in 1566, but her infatuation with Darnley was over. She took up with the ruthless Earl of Bothwell instead and in February 1567 the strangled bodies of Darnley and his valet were found at Kirk o’ Field in Edinburgh after barrels of gunpowder had exploded under Darnley’s room there. The failed marriage had momentous consequences, for the baby James grew up to rule both Scotland and England as James VI and I.