Bartholomew's Fair, which dates back to the 12th century, was held for the last time on September 3rd, 1855. 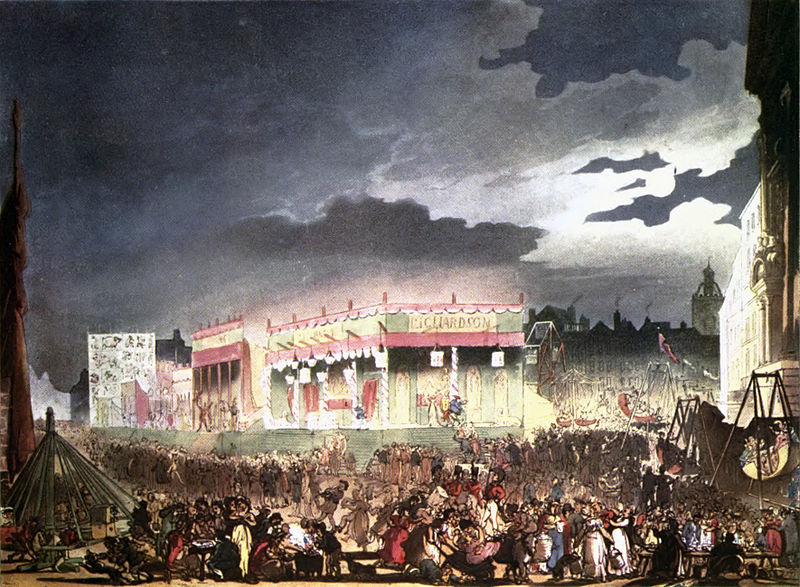 The fair went all the way back to 1133, when Henry I issued the licence for it to a former court entertainer, Rahere, founder of the priory at Smithfield which eventually became St Bartholomew’s Hospital. Prior Rahere liked to go to the fair himself and do some juggling, and his foundation drew useful income from it. Held on the open space of Smithfield, just outside the city walls, starting on the eve of the feast day of St Bartholomew in August, it grew into the country’s largest cloth fair and London’s biggest annual jamboree. From 1604 it was controlled by the City of London and opened every year by the Lord Mayor.

By that time, the fair had become far more of a carnival than a business function. Puppet-shows, wrestlers, fire-eaters, dwarfs, dancing bears, performing monkeys and caged tigers vied for attention with contortionists and tight-rope walkers. Astrologers cast horoscopes and miraculous medicines were hawked. Proprietors of food and drink, beer and tobacco, bellowed for custom amid a miasma of roast pork. There were plentiful supplies of toys, gingerbread and mousetraps, puppies, purses and singing birds in a general bedlam of shouts, fiddles, drums and rattles. The fair was one of the year’s great opportunities for pickpockets, naturally, and also for prostitutes, who might be found in tents coyly labelled ‘soiled doves’ or in a nearby street appropriately named Cock Lane.

A man who visited Smithfield in 1614 left an admiring account of a conjuror putting on a show with three yards of ribbon, while attractions in the 1700s included boat-swings and the Whirligig ferris wheel.

The change of calendar shifted the fair’s date into September. It continued full tilt through the eighteenth century. Attractions when Wordsworth went in 1815 included albinos and Red Indians, ventriloquists, waxworks, and a learned pig which, blindfolded, could tell the time to the minute and pick out any specified card in a pack. Among things William Hone enjoyed in 1825 were the living skeleton, an elephant which uncorked bottles, a glass-blower in a glass wig blowing tea-cups for threepence apiece and baby crocodiles being hatched from eggs by steam. The fair’s loutishness, drunkenness and vulgarity, however, aroused growing middle-class disapproval. It was attracting too many thieves and muggers, and the City imposed increasingly stringent restrictions. By the 1840s it was a shadow of its old self and it made its last bow in 1855.