Kings in the Tower of London

From Norman times until the fifteenth century, writes L.W. Cowie, the Tower was often a royal residence as well as a fortress and armoury. 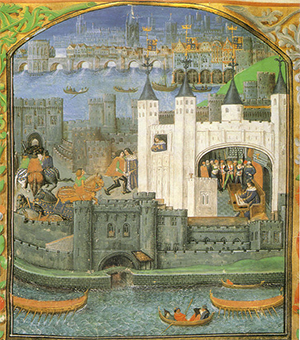 Though the main royal residence of the medieval Kings of England was always their palace at Westminster, the Tower of London was from the time of its construction by William I an alternative royal residence and particularly a refuge for them in times of crisis. It is known that the oldest part of the castle, the White Tower, was begun after 1077 and completed by 1097. The notice ‘Begun circa 1080’, formerly displayed outside the Tower, has now been removed; and 1078 has been accepted as the year of its beginning. If a year is wanted to mark this, it is probably as good a guess as any.