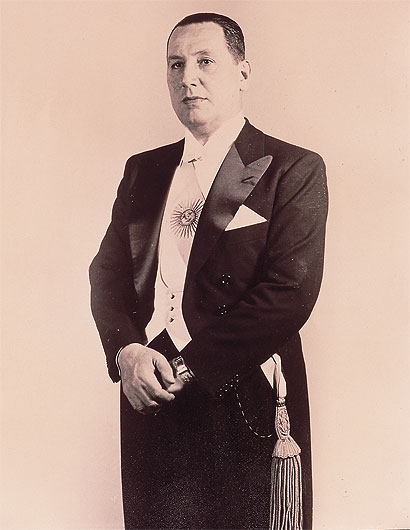 Elected president of Argentina in 1946, Juan Perón was re-elected in 1952. The origins of his fall have been traced back to the premature death that year of his wife, the glamorous Evita, of cancer in her early thirties. She was a major factor in the Peronista hold on the poor, the working class and the trade unions, and her death seems to have left her husband disoriented. A sexual relationship with a young girl and rumours of palace orgies raised eyebrows. He had to cope with a serious economic crisis, with inflation at 30 per cent at one point, and fell out with the Roman Catholic Church, which refused to canonize the departed Evita. Perón threatened the separation of church and state, ended religious instruction in state schools and planned to legalize divorce and prostitution. In political terms it was a serious error of judgement.

In June 1955 Perón had two Catholic priests deported to Italy and the Vatican promptly excommunicated those responsible, without specifying exactly who. Elements of the navy and airforce rebelled and planes dropped bombs on Buenos Aires, killing some 350 people. The rising was put down, but gangs of young thugs started looting and desecrating churches, and seven were burned down in Buenos Aires, which severely damaged Perón’s reputation.

At the end of August a report that the president was going to resign was followed by a general strike and a carefully organized protest demonstration in Buenos Aires, at which Perón made a violently inflammatory speech, encouraging his supporters to kill their opponents. General Eduardo Lonardi, who had a personal grudge against Perón, now took action. On September 16th, army and airforce units at Cordoba broke out in open revolt, seized control of the city and proclaimed the end of the Perón regime. They were supported by General Pedro Aramburu in the north-east. Most of the army seems to have been  loyal to the president, but the navy was not. Warships steamed for the capital, blockaded Buenos Aires and threatened to blow up the oil refineries on the River Plate, and if necessary the city itself. A cruiser actually began shelling the docks and oil installations on the 18th.

Perón evidently felt the game was up. He formally resigned the next day, and took refuge in the Paraguayan embassy. Some 500 armed storm-troopers of the Peronista militia barricaded themselves in their headquarters and refused to surrender to army units, which moved infantry, tanks and artillery in against them and forcibly dispossessed them with heavy casualties. General Lonardi swept into Buenos Aires on the 23rd, to be greeted by cheering throngs – the largest ever recorded in the city’s history – and installed as provisional president (he would soon be ousted in his turn by General Aramburu), while Perón was transferred to a Paraguayan gunboat. It had something wrong with it and a second gunboat had to be sent to take him away into exile in October.

Perón soon moved from Paraguay to Panama, then to Venezuela, then to the Dominican Republic and the welcoming embrace of Rafael Trujillo, and finally to Spain, where he settled in Madrid. Few people in Argentina had expected ever to see him again, but after eighteen years in exile he reappeared in 1972 and was elected president with an overwhelming majority the following year.