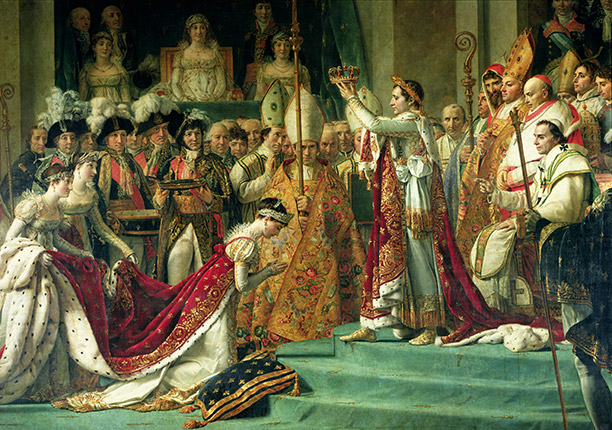 The odds against Marie-Josèph-Rose Tascher de La Pagerie becoming Empress of the French were astronomical. Known as Rose in her early years, she grew up in the French colony of Martinique. She was the first child of a minor aristocratic family that owned a sugar plantation. Her father, Joseph-Gaspard, Seigneur de La Pagerie, was a naval officer and she had Irish blood on her mother’s side. ‘Contrary to all our wishes’, her mother wrote after Rose was born, ‘God has chosen to give me a daughter.’

The Almighty would bestow more daughters on the La Pageries, but the marriage was not happy and the family fell into financial difficulties after a hurricane wrecked their plantation in 1766. Joseph-Gaspard’s sister, Désirée Renaudin, was the mistress of the island’s governor, François, Marquis de Beauharnais, a nobleman with substantial estates in France. She arranged for his younger son Alexandre to marry the La Pageries’ second daughter, Catherine, which would bring Beauharnais money into the La Pagerie coffers, but unfortunately Catherine died of tuberculosis in 1777, when she was 12.

The family planned to replace her with their youngest daughter, who was 11, but Rose flew into such passionate and repeated storms of protesting tears that they decided to send her to France instead. Her father wrote to the Beauharnais family to say ‘She has very fine skin, beautiful eyes, beautiful arms and an unusual gift for music’, as well as ‘a very sweet disposition.’ Rose was removed from her convent school and taken to France by her father in 1779. She and Alexandre de Beauharnais were married in December, when she was 16 and he was 19, at Noisy-le-Grand outside Paris, where Désirée had her country house. She paid her brother’s expenses and bought Rose’s trousseau as well.

The couple would have two children, Eugène in 1781 and Hortense in 1783, but the marriage was not a success. Alexandre was a handsome infantry officer and an enthusiastic womaniser who moved in high social and intellectual circles. He was embarrassed by his wife’s lack of sophistication or any sign of intellectual interests. He complained that she was jealous and possessive and accused her of having affairs, going so far as to doubt whether Hortense was his child. There is no evidence that she was unfaithful to him, but things grew worse and in 1785, at Alexandre’s insistence, they separated and she went to live in a Paris convent. There Rose met women who were exiles from aristocratic families and learned sophisticated manners and the ways of fashionable society.

In 1788 Rose went back to Martinique, but a slave rebellion in 1790 was so threatening that she returned to Paris, which was in the throes of the French Revolution. Alexandre had joined the revolutionary army, but he fell under the suspicion of the Committee of Public Safety, which in 1794 had him and his wife arrested and sent to the Carmes prison. He was guillotined in the Place de la Révolution, which Rose discovered when she saw his name in the list of executions a Paris newspaper provided every day. The fall of Robespierre and the end of the Terror came a few days afterwards and she was released on the orders of Jean-Lambert Tallien, one of the anti-Robespierre political group that would rule France under the Directory.

She became a friend of Tallien’s mistress, Thérésia Cabarrus, and embarked on love affairs with several of the country’s new leading figures, including Paul Barras, the head of the Directory. Wits called her ‘government property’. She combined physical allure (despite her blackened teeth) with sweetness of character and she enjoyed both sex and spending money. In 1795 the Talliens introduced her to an up-and-coming young general, Napoleon Bonaparte. He fell utterly in love with her and wrote her passionate letters. ‘I awake full of you,’ he wrote in December. ‘Your image and the memory of last night’s intoxicating pleasures has left no rest to my senses.’ He called her Joséphine, a name she adopted for the rest of her life.

She was not in love with him, it seems, but thought him her best choice for the future. They were married in March 1796 when she was 32 and he was 26. Three days later he left to take command of the Army of Italy. Both were unfaithful, but the marriage lasted until he crowned her Empress of the French in Notre Dame in 1804, when she was 41. She was 50 when she died at her château of Malmaison in 1814.