Six months after the outbreak of war the Brighton Herald of January 16th, 1915, reported an encounter between a small group of Indian soldiers and the people of the town. It took place outside the York Place secondary school, which had been converted into a hospital for wounded Indians, newly arrived from the First Battle of Ypres. The Herald's reporter was covering a visit by two members of the royal family: Princess Beatrice, who had lost a son in the same battle just months before, and her sister, Princess Louise, who had recently lost her husband, the former Governor-General of Canada, John Campbell, 9th Duke of Argyll. The recently bereaved pair, daughters of Queen Victoria and thus a direct link to the first Empress of India, would have been thought highly suitable ambassadors to the Indian troops. But it was an impromptu incident that day which caught the reporter's attention: 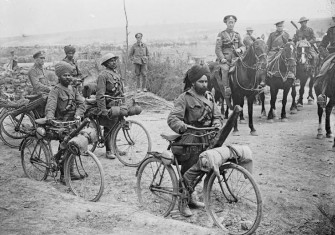 In Memory of India’s Fallen