The Death of Martin Luther King

The civil rights leader was shot dead on the balcony of the Lorraine Motel on April 4th, 1968.

Spaces in the Past

Martin Evans talks to Helen Dunmore, whose historical novels range from the worst horrors of twentieth-century warfare to the luxurious world of late Republican Rome.

Reds Under the Bed

International alarm over the terrorist threat is not new. Anthony Read relates how the appearance of Bolshevism created a state of near hysteria throughout the Western world.

Anthony Fletcher delves into the diaries of teenage girls in the Georgian and Victorian eras to explore the little-changing constraints, punishments and occasional delights of being brought up a girl in upper-class Britain before the Great War.

As Fidel Castro finally hands over the reins of power after forty-nine years, Michael Simmons finds his country poised between past and future.

The Case for Conscription

Many who supported the campaign for compulsory military service in Edwardian Britain saw it as a necessary measure against the threat of invasion and the shadow of German militarism. Others identified it as a valuable counter to ‘softness, indiscipline and unmanliness’ in young men of the period. Detractors, meanwhile, feared it could be used to overthrow the state. Tom Stearn describes the campaign, how it was received and what it achieved in the run up to the First World War.

In 1908 the Olympic movement visited Britain for the first time. Stephen Halliday describes how the British Olympic Association prepared for the Games with barely two years notice.

CND: The Story of a Peace Movement

Sue Donnelly introduces the archives of the Campaign for Nuclear Disarmament, and a project to make them accessible to a wider audience. 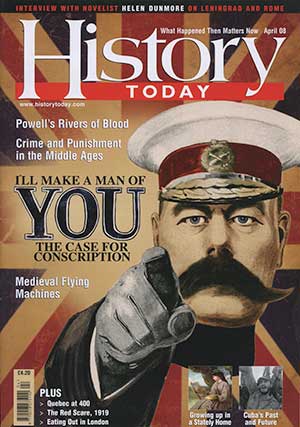