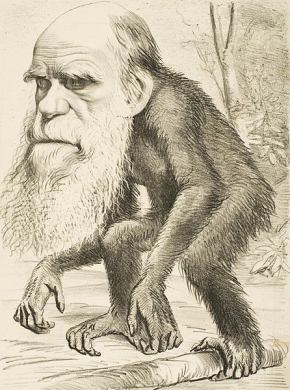 Charles Darwin was a gift to Victorian cartoonists and caricaturists, both in Britain and overseas. His bushy eyebrows, bald head, deep-set eyes, short nose and long beard made him look like some ancient species of monkey, a perfect target for those who wanted to lampoon his then controversial claim that Man was descended not from Adam and Eve but from some kind of  ape. However, it should not be forgotten that he wrote many other books apart from his celebrated The Origin of Species (1859) and The Descent of Man (1871) and the last of these, about earthworms, became the subject of two notable Punch cartoons by Linley Sambourne. The evolution debate also gave the famous Vanity Fair caricaturist ‘Spy’ (Leslie Ward) his first big break.