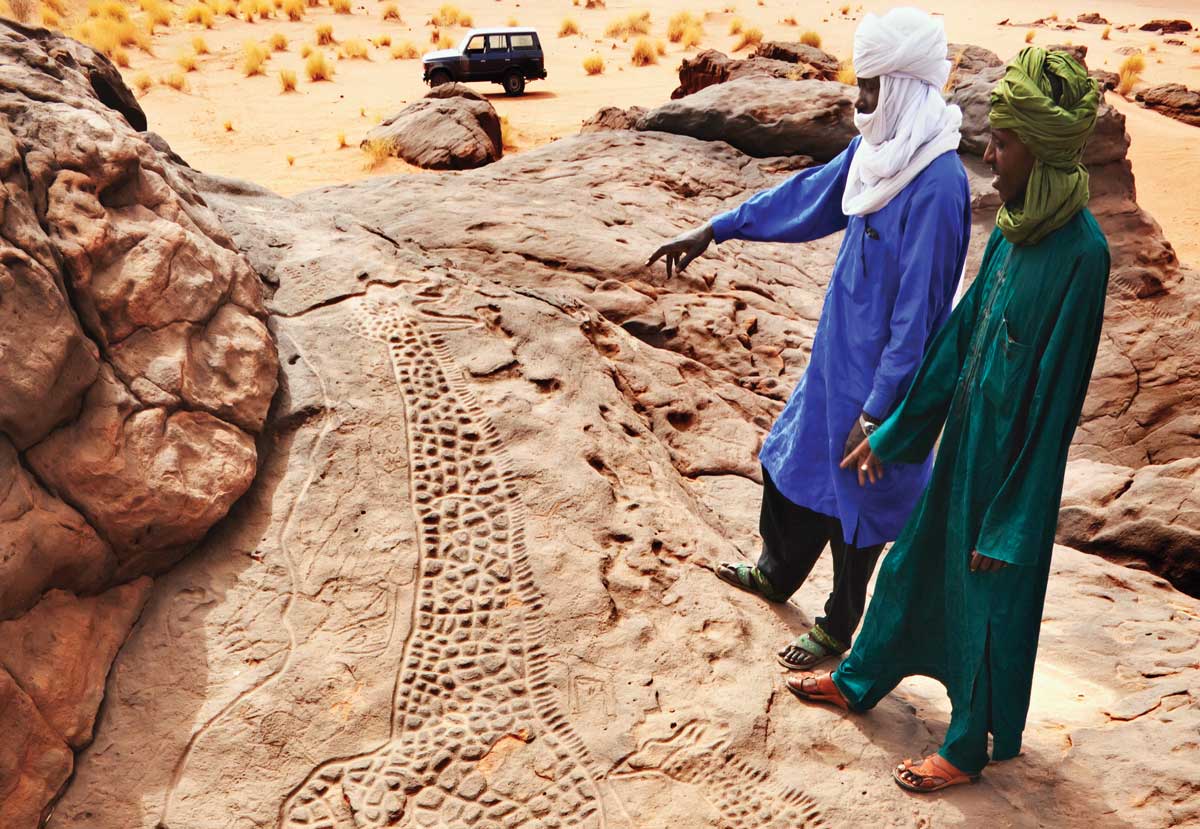 In the far west of Egypt, in one of the harshest stretches of the Sahara desert, is a remarkable cave. On its walls are hundreds of figures: all enigmatic, some plainly oblique. Human bodies, out of proportion, travel in processions, popping in rich ochres on the light walls. Yet, most remarkably, many of the figures are lying prostrate, with their legs and arms in the air in a motion that appears to resemble swimming. This raises a fascinating question: why were ancient artists painting swimming scenes in a barren strip of the Sahara?

The Sahara was not always a desert. It was once a vast savannah, teeming with gazelles and antelope, lions, giraffes, elephants and people. There are some remarkable memorials to the bounty of this environment. Take the Dabous Giraffes, a 10,000-year-old life-size carving of two giraffes, etched in mesmerising detail. They are found in Niger’s Tenere Desert, an area of the Sahara. ‘Tenere’ translates literally as ‘where there is nothing’; yet here are two of the finest rock-carvings on earth, a tribute to a time when the desert teemed with life.

Between 8,000 and 4,500 years ago the region of the Sahara began to dry, the landscape desiccating and transforming into desert. The monsoon belts moved further south, followed by the big game, such as elephants and giraffes. It was long thought that this process was a purely natural one, caused by wobbles in the Earth’s orbital axis. However, some have suggested that the humans of the Sahara, bands of far-ranging hunter gatherers at this time, had some part to play. The archaeologist David Wright has hypothesised that, as humans began to shift from hunting to pastoral lifestyles and brought herds of hungry goats and cattle along with them, the Sahara’s delicate soil may have turned to desert all the quicker. Indeed, as the lush savannahs shrivelled away and food got scarcer, more and more people would have to turn to pastoralism, thus accelerating the process of desertification.

This is merely a hypothesis. Objections have been raised over the likely number of people and animals involved. Although population estimates are hard to make, it seems likely that there were simply too few people to contribute meaningfully to the ecological metastasis of the region.

Perhaps this is a more disturbing thought: that the people who left the Dabous Giraffes or the Cave of Swimmers were not forced out of their lands by their own hubristic tampering with the environment, but by forces entirely outside of their control.

Their culture was a fascinating one, although it remains cryptic. It has been argued that the Cave of Swimmers is a depiction of genuine swimming in what were once lakes in the region, perhaps some 100 miles away from the site. As an itinerant people, it is perfectly likely that whoever drew the pictures had been to such lakes. Others claim, however, that the swimming figures have a more symbolic meaning. In the nearby Cave of the Beasts, similar swimming figures are shown, seemingly moving towards large headless creatures, which swallow and regurgitate them. These scenes are puzzling to interpret, but a number of hypotheses have been presented.

The first is that these creatures are animals like lions, whose heads have been intentionally removed. Some seem to be captured in thin nets and other dangerous animals in cave art of the region have been intentionally defaced. It is believed that ancient Saharans did this to magically neuter the image’s power, as depictions of dangerous or demonic creatures could bring them into being without such a corrective. Similar beliefs were later common in Ancient Egypt.

The other hypothesis is that the swimmers represent the deceased and the headless creatures are gods or guardians, like Cerberus or Ammut, who herald the dead’s entry into a sub-aquatic netherworld. This theory finds peculiar corroboration in Egyptian texts, which must be treated cautiously as they date from thousands of years later. Many, such as the New Kingdom Book of the Gates, described the dead in such terms:

Perhaps most curious is a description from chapter 127 of the Book of the Dead:

The book of worshipping the gods of the caverns; what a man should say there when he reaches them in order to go in to see this god in the Great Mansion of the netherworld.

Hail to you, gods of the caverns which are in the West! Hail to you, door-keepers of the Netherworld who guard this god and who bring news to the presence of Osiris! …

O you door-keepers who guard your portals, who swallow souls and who gulp down the corpses of the dead who pass by you when they are allotted to the House of Destruction.

Whatever the enigmatic meaning of such pictures in Saharan rock art, they provide fine fodder for the imagination. The parallels in Saharan iconography with those of Ancient Egypt tell of a final victory of the cultures of the Sahara. While desertification would chase them from their lands and fossilise such relics as their rock art, it also mollified the once thorny and inhospitable swamps of the Nile, where many Saharans would settle in the sixth millennium BC. Although the story of the Sahara’s emptying may seem a gloomy ecological parable, it also brought with it new winds of opportunity. The seeds of Saharan culture were caught up in this breeze and germinated in Ancient Egypt. 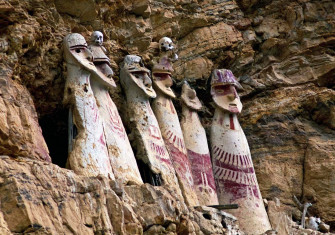 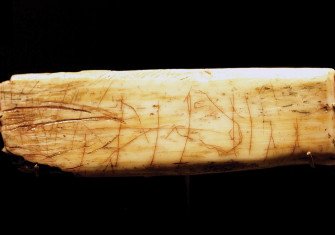