Recent press coverage of a cave filled with ‘witch marks’ misses the point. 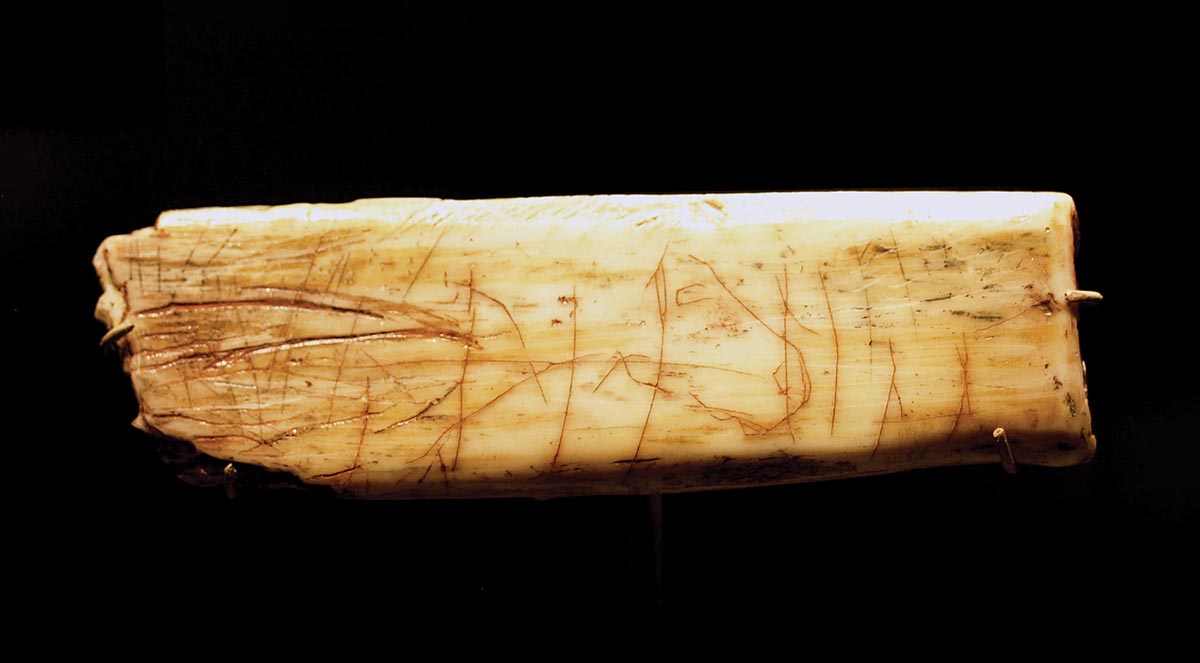 The stunning landscape associated with the magnesium limestone rocks of the Nottinghamshire and Derbyshire border is scattered with narrow, steep-sided gorges or ‘grips’, containing caves and rocky shelters, the most famous of which is Creswell Crags. The Crags are known for their Ice Age cave art, both carved on the walls and on objects found in the caves including, notably, a horse, carved into a horse’s rib. The human story of the Crags has evolved over millennia. One part of this story is the recent discovery of protective marks – sometimes known as ‘witch marks’ – inscribed into the walls of one particular cave, Robin Hood Cave, scattered among the other, more typical, graffiti of names and dates. This discovery is evidence of the caves’ continuous and ever-changing use over time, from Ice Age shelters to a site of early tourism.

Along with marks that are probably Christograms and what looks to be part of a medieval gaming board known as a merel, the most prevalent mark at Creswell is a conjoined ‘V’. The VV mark has its origins in the medieval Cult of the Virgin, where it was used as an expression of personal religiosity and devotion, as a blessing and also as an ex voto inscription to give thanks for prayers answered. It is widely believed to come from the Latin Virgo Virginum, Virgin of Virgins. However, with the Reformation, the Marian association was lost and the mark became a secular folkloric protective practice – against evil, illness and misfortune. It is from this shift that they gained the name ‘witch marks’, which has been used in the popular press somewhat erroneously to describe any mark that had a protective or spiritual function. These marks are Christian in origin but become a general means of warding off bad luck and evil later on and have no particular ties to witches.

As the marks were used from the medieval period to at least the 18th century, those in Robin Hood Cave are difficult to date. The only reliable way of establishing a date is through palaeography and stylistically these appear 17th-century, or possibly a little later. Indeed, it has been suggested that these carvings cannot have been made before the cave was excavated in the late 19th century. The evidence, however, suggests otherwise.

The VV symbols are largely concentrated in a small chamber at the point farthest from the entrance of Robin Hood Cave. This chamber contains a significant drop into a lower cave system, which, until excavations by Victorian archaeologists, was filled with cave earth and sediment. No daylight penetrates the cave at this point, so any graffiti would have to have been made by lanterns or candlelight.

The initial excavation of Robin Hood’s Cave was carried out by J. Magens Mello in 1875 and a report was published in the Quarterly Journal of the Geological Society the following year. In Mello’s first report, he states: ‘Robin Hood’s Cave is of moderate size containing several chambers connecting with each other, the separation merely consisting of narrow walls of limestone rock’. He also announces the discovery of some broken fragments of Roman and medieval pottery, as well as a human incisor and some recent animal bones, all of which suggest a fairly continuous use of the cave.

The ‘tide-mark’ left by Mello’s excavations can clearly be followed around the wall, making it easy to see the sediment levels in the cave at the time he first visited and this, together with his original drawings of the interior of the cave, show that the entrance to the graffitied chamber at the rear was never blocked. Among the markings in this chamber are some clear 18th-century dates, adding to the proof that this part of the cave was always accessible and that the VV inscriptions could have been made before Mello’s arrival.

Creswell Crags comprises part of the Welbeck Estate, owned by the Dukes of Portland, and are located in a part of the Nottingham countryside known as ‘The Dukeries’. Nottinghamshire was once described, rather disparagingly, as ‘Four Dukes, two Lords and three rabbit warrens’. Originally this land belonged to Welbeck Abbey, founded 1153 by the Premonstratensian Order. The Abbey was sold off after the Dissolution, changing hands until it was eventually bought in 1607 by Charles Cavendish, the younger son of Bess of Hardwick, in 1607.

Little is known of the occupation and use of the gorge in the early modern period. Some late 16th-century pottery sherds have been found, as well as, in a couple of the caves, an undated hearth structure and burnt animal bones. One of the caves in the gorge, Church Hole Cave, was also used as animal housing. The nearest village is Elmton, which is recorded in Domesday, but it is doubtful that Creswell existed as a settlement in the early modern period. If there was any habitation at all, it was likely only small farmsteads.

During the 18th century several painters used the Crags for inspiration, including George Stubbs, famous for his equestrian works. Samuel Hieronymus Grimm painted the Crags in 1785 and depicted several cottages set within the gorge. In 1797, however, John Throsby remarked that Creswell was scattered with signs announcing ‘no road this way’, implying the Crags were not easily accessible. When the Dowager Duchess of Portland took her friend Miss Delaney on a picnic to the gorge, servants had to beat a trail through thick undergrowth. Miss Delaney commented on the picturesque romanticism of the setting, with the ‘two ranges of rock, towering as it were, in rivalship of one another … cottages here and there, patches of verdure with sheep feeding’.

The recent discovery of the protective marks at Creswell has opened up a whole new narrative for the site. New stories are starting to emerge and new audiences are visiting the caves to explore their own stories and beliefs. Further research is being undertaken, combining geology, art, history and archaeology with Creswell as the focus.