The smooth whiteness of paper belies the mess and hard labour that went into its production.

In 1668, Edmund Waller wrote the following poetic lines about paper:

Fair hand that can on virgin Paper write,
Yet from the stain of Ink preserve it white,
Whose travel o’re that Silver Field does show
Like track of Leveretts in morning snow.

Waller’s paper is white and at risk of being ‘stain[ed]’ with ink. It is a passive and silent object, which will become the blank support for the actions of a writing hand. The Paston Letters, a remarkable set of family correspondence spanning from the 15th to the 17th centuries, similarly refer to the precious quality of paper. In 1451 Sir John Paston’s wife describes paper as ‘deynty’ (‘dainty’), expressing her feelings of esteem and delight for it. A little over a decade later, in 1469, Paston similarly points to paper’s high value as he describes writing on ‘quairs of papir of witnessis’ – bundles of white paper. Earlier still, Geoffrey Chaucer chooses white paper, alongside other precious objects such as gold and ornate embroidery, to describe the purity of the horse that carries Dido in his late 14th-century Legend of Good Women.

Robert Hooke, an English polymath and pioneer of the first microscopes, wrote in his Micrographia (1665) that, when observed through a microscope, paper has an ‘uneven surface’ which ‘at best appears no smoother then [sic] a very coarse piece of shag’d cloth’ with printed impressions ‘like smutty daubings on a matt or uneven floor’. Paper’s coarseness when subjected to the microscope jars against the descriptions given earlier, which describe paper as ‘virgin’-like. Hooke’s descriptions are not wrong, however, and echo the illegible labour that hovers beneath the printed surfaces of book production.

Paper may seem simple. Tracing the history of paper, however, reveals it is not. Beginning as tattered rags, but eventually turning into clean and valuable smooth-white sheets to be written on, paper could only be made from materials that had circulated through different strata of society. Paper is not simply a blank support patiently awaiting hand, pen nib and ink, but a record of a world of dunghills, rags and itinerant workers.

Between the 15th and early 19th centuries, the process of making paper – combining rags with water – changed little. Upon entering the paper mill grounds, the sound of creaking carts and crashing machinery signalled the beginning of a day’s work. Rag-pickers (almost always women) would start the process by searching for and sorting different discarded rags into piles of varying quality and strength: linen for white paper and other, lesser, fabrics for brown paper. If the women sorting the rags failed to meet the millmasters’ expectations, they would receive nothing for their work and would be required to sort through the discarded linen again. These rags were often formerly clothes or sheets that had become too worn to wear and were reused as rags around the home or as menstrual cloths. When they became too tattered for the home, they were taken off to the paper mills, or collected by the low-status women of the rag trade. This work was often unpleasant as the rags came from all sorts of places. One account describes a cartload of discarded linen that was ‘overloaded with strawdust … [and] streaked with vomit’. The weak, stretched and frayed fibres of these old and tattered rags were ideal for making paper because they responded well to the harsh papermaking process.

Sorted rags were then soaked in water and left to rot for up to six weeks. This dunghill of worn fabric decomposed quickly as the putrefaction advanced and a 19th-century account describes how the mixture in its final stages ‘gives rise to a kind of white mildew, similar to that which is seen on manure … [by which] time a considerable portion of the rag fibres [would] have been reduced to mold’. This unpleasant mixture was then pulped in a stamping mill, which was essentially a trough fitted with a set of rather aggressive nails designed to macerate the old fibres further. The resulting concoction, known as ‘pulp’, was washed thoroughly, again by low-status women, to whiten and cleanse the fibre of impurities and microbes before it was carried back to a vat and warmed with a charcoal stove. A vatman would then dip a mould (a rectangular wooden frame with stretched metal wires) into the mixture and use a ‘deckle’ (a narrow wooden rim placed on the mould) to collect each sheet of pulp. Because handmade paper bore the impressions of the metal wires from the mould, millmasters would expect their vatmen to inspect the stringing of their molds no fewer than 20 times each day. The pulp filled mould would then be passed to the coucher, who would allow the water to drain and deposit the wet sheet onto a damp, woollen felt. As more sheets of wet paper were added to the pile, the coucher constructed a ‘post’, usually 144 sheets or six quires, of fresh sodden, but unwrinkled, sheets interleaved with felts. The post was transferred to a press, where it was screwed down to remove as much water as possible.

Afterwards, the newly minted sheets were taken to the loft space where they were hung up to dry. The paper was then ready for ‘sizing’, which involved applying a protective layer to make the paper less absorbent and more suitable for writing on. Adding the final protective layer involved boiling animal parts leftover from butchers – ‘the skins of small animals such as hares, rabbits, or eels’ – to release gelatin. The paper was bathed in this emulsion, which would fill its pores, thereby preventing ink-blots, and increasing the quality of the finished product. Finally, the paper was ‘polished’ or smoothed out by rubbing it with a stone, which required considerable pressure and was often, again, a woman’s job. Although millmasters preferred their workers to be ‘responsible adults’ and not ‘uneducated, inexperienced country-folk’ (according to an 18th-century manual by Jérôme Lalande), swarms of children could often be seen performing odd jobs around the mill as child labour was cheap or even free.

Papermaking was uncomfortable and tough work and the length of the working day was based not on hours but on a set quota of posts of a given type of paper expected per day. When the quota was reached, the day was finished, even if it meant working by candlelight.

The harsh reality of papermaking – rags being beaten, stretched, pulped, soaked, heated and hung to dry – conflicts with the clean whiteness that paper so often embodies. Understanding the material and nomadic beginnings of paper, as well as the people who it necessarily comes into contact with, presents another way of looking at it. As researchers mine the written text for all sorts of literary meanings and historical evidence, it is easy to overlook the history of paper, which sometimes tells quite a different story to the one told by the words on its surface.

Madeleine Killacky is a PhD researcher at the University of Bangor. 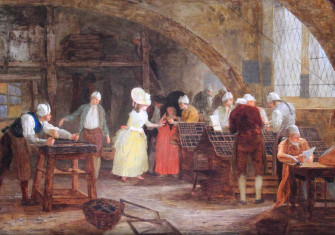