In Bed with the Tudors

Did Tudor beds have footboards? The conundrum illustrates the challenges of early modern history.

History is the ‘shipwreck of time’. Innumerable examples of domestic furniture from early modern England have been lost because of natural wastage, changing fashions and the destruction of the Civil War. Unless preserved in ecclesiastical contexts, ancient domestic furniture typically exists in fragments; the headboard from Henry VIII’s marriage bed, now in the Burrell Collection, Glasgow, is an example. On occasion, these fragments have been cobbled together with modern woodwork to create ‘cut and shut’ antiques.

Despite this, pieces of medieval furniture do survive and occasionally materialise. The challenge is to try to ascertain their authenticity. A little over a decade ago, a four-poster bed replete with English royal heraldry was sold for £2,200 from a hotel in Chester as a Victorian reproduction. Material analysis has subsequently revealed that this bed’s structure and carved panelling is made almost exclusively from one tree; its DNA places it in central Europe (there is just a two per cent chance of the oak coming from England). Crucially, the use of wood from just one tree means the bed isn’t cut and shut; it is a genuine antique.

The surfaces of this bed also preserve fragments of paint, including deep blue from the rock lapis lazuli, that are consistent with the types and application of pigment from 15th-century England. The ornate headboard further attests to the bed’s age. It depicts Adam and Eve trampling evil, with other imagery evoking unification and fertility. This and other details, including its heraldry, refer to the 1486 marriage of Henry VII and Elizabeth of York that helped mark the end of the Wars of the Roses. The discovery of their marriage bed – where Henry VIII was possibly conceived – in 2010 was a hugely significant find.

Another surviving bed with similar decoration was almost certainly made for Sir Thomas Stanley, 1st Earl of Derby. Stanley was Henry VII’s stepfather which helps to explains the existence of two remarkably similar state beds from the dawn of Tudor England. A photograph of Stanley’s bed, taken in 1913, has recently emerged and records the bed’s form when it was sold from the Orchard, a manor house in Rochdale. Noteworthy are the bed’s canopy and double-decker footboard replete with Henry VII’s royal arms and Stanley’s gartered shield; these parts have now disappeared and therefore can cannot be tested. The bed itself has vanished into a private collection.

During the 20th century the Stanley bed was disassembled and restored at least twice; these so-called improvements fundamentally reformulated its appearance. The footboard was removed, almost certainly to make it conform to assumptions about ancient beds. It is widely accepted that medieval beds did not include footboards that were designed to be seen. Such footboards are believed to be part of the 19th-century Gothic Revival spearheaded by Augustus Pugin. The double-decker footboard that had been attached to the Stanley bed by 1913 has, therefore, been dismissed as wholly Victorian, based solely upon received opinion. Sadly, we do not have the ability to assess and test it scientifically.

Such assumptions about medieval beds are, however, hampered by the fact that few examples survive and inventory descriptions rarely offer meaningful detail. We cannot build a complete picture of a typical bed’s appearance from this time. A small group of early Tudor beds from Lancashire does exist, though one was converted into a bookcase before being given to Chetham’s Library in Manchester in 1827. It is impossible to say how representative these examples are, outside Lancashire.

Instead, for over a century, historians have turned to the next best source given the dearth of physical evidence: visual depictions found in manuscript illustrations. Bedding is typically shown extending over the foot of the bed, covering the front rail and forming a valance (or ‘bed skirt’). Given that most English beds illustrated in manuscripts conform to this model, the reasonable assumption is that medieval beds had a modest foot rail rather than a large and elaborate footboard between the legs.

As with the Stanley bed, the royal bed’s footboard has been dismissed as Victorian frippery and some have used it to call into question the age and authenticity of the whole structure, despite the carved decoration preserving fragments of a medieval paint scheme. But because of the limited number of surviving Tudor beds – let alone royal ones – it is possible that the carved footboard is not the Victorian addition some have assumed it to be, but instead, a tangible example of what a royal bed from 1486 could look like.

An investigation of beds depicted in medieval manuscripts and early 16th-century printed designs, as well as physical examples, reveals that carved footboards intended for display were very much part of contemporary design language. Perhaps the most significant example is found in a manuscript held by Corpus Christi, Oxford. Depicting Henry I’s nightmares, the scene shows the king on a bed where the pierced headboard, along with its capping and corner finials, is replicated at the foot of the bed, too. This footboard rises a little less than the headboard, but it is still above the level of the bedding. In no way was this board designed to be hidden. Of course, this bed was almost certainly hypothetical, but it still demonstrates that the concept of a carved and exposed footboard existed in English visual culture as early as the 12th century.

These examples not only demonstrate that the footboard was part of the visual language of 16th-century beds, but that this concept existed as early as the 1140s in England. Dismissing footboards on Tudor beds as Victorian interventions when we do not have sufficient evidence to make conclusive pronouncements is a particularly acute illustration of the challenge facing historians of Tudor material culture.

Peter Lindfield is Lecturer in History and the Country House at Manchester Metropolitan University. 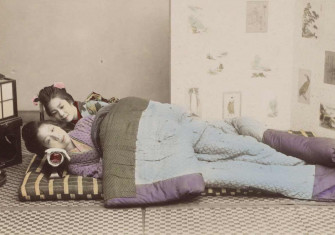 Beds and their Bedfellows 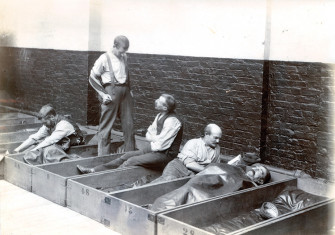