The staple dish of the Middle East is as contested as the region, with different peoples claiming it as their own.

Falafel is as contentious as the region itself. While the Israelis have fêted it as one of their national dishes, the Palestinians are resentful of what they perceive as the ‘theft’ of a distinctly Arab speciality. Meanwhile, the Lebanese have tried to have it recognised as their own; even the Yemeni say it is they who invented it. This is not just a matter of culinary pride. More often than not, arguments about the origins of falafel are refracted through the lens of political rivalries. Particularly for the Israelis and the Palestinians, ownership of this most distinctively Levantine dish is inexorably bound up with issues of legitimacy and national identity. By claiming falafel for themselves, they are each, in a sense, claiming the land itself – and dismissing the other as an interloper or occupier.

Such rhetoric, however, scarcely matches up with the facts. Despite all the claims and counter-claims, falafel was almost certainly developed in Egypt, although when and by whom is a matter of debate. Some have suggested that it dates back to ancient times, though this is almost certainly incorrect. There are no references to anything resembling falafel in pharaonic texts; in any case, the vegetable oil in which falafel is fried was then too expensive to be used to cook such a simple dish. Nor does it seem any more likely that falafel was invented by Coptic Christians as meat-free food for Lent. There is not a shred of evidence to support this; besides, ‘falafel’ is most definitely not a Coptic word.

In all probability, falafel is comparatively modern. As Paul Balta and Farouk Mardam Bey have shown, falafel only appears in Egyptian literature after the British occupation in 1882. Why this should have been the case is unclear; but Balta and Mardam Bey have speculated that British officers, having acquired a taste for fried vegetable croquettes in India, may have asked their Egyptian cooks to prepare a version using local ingredients. There is no proof of this; but it is not implausible. There were plenty of Indian dishes which were made in a similar way (e.g. vada and bonda), which could have provided the necessary inspiration. Perhaps the most intriguing candidate has recently been suggested by historian Shaul Stampfer. In the late 19th century, the Jews of Kerala and Calcutta often made fried balls of split green peas known as parippu vada or filowri, which, as Stampfer has observed, were ‘strikingly similar to falafel’.

If our fragmentary evidence is to be believed, falafel emerged in Alexandria – then, as now, the country’s principal port and home to the largest concentration of British and European troops. At first, its principal ingredient was fava beans, which were grown in large quantities nearby and which had established themselves as a staple of the Egyptian diet under the Muhammad Ali dynasty. So closely were the dish and the ingredient associated with one another that it appears to have been from fava beans (fūl) that falafel took its name. 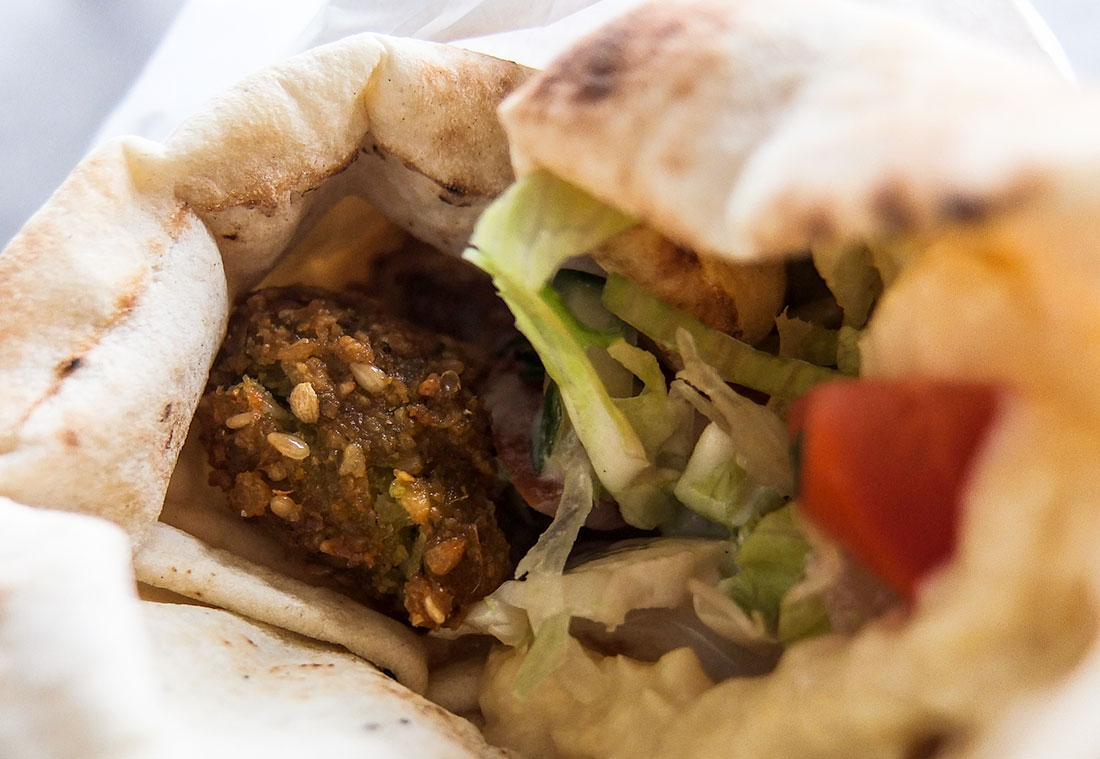 From Alexandria, falafel spread throughout the country, gaining such popularity that, further south, it became known simply as ta’miyya – literally ‘a bite of food’. Having conquered Egypt, it began to migrate, though the exact trajectory is difficult to reconstruct. But shortly after the First World War, it had reached what is now Lebanon and, in 1933, Mustafa Sahyoun opened his falafel shop in Beirut. At about the same time, falafel travelled down the Red Sea coast towards Yemen, north along the Mediterranean to Turkey and west towards Libya. All those who adopted it made it their own. Though they generally left the basic recipe unchanged, they altered the ingredients slightly to suit their own tastes or to reflect the balance of local agriculture. In the Egyptian town of Mersa Matruhh, for example, fava beans were replaced with hyacinth beans and a bit of beef. In the Levant, chickpeas were used instead.

Falafel also reached the Jewish communities in Palestine. Their relationship with falafel was, however, more complex. Together with the indigenous population, the earliest settlers (halutzim) adopted it readily. Having long grown used to cultural exchange with their Muslim neighbours, they gave no thought to whether it was an ‘Arab’ food or not. They simply integrated it into their own cuisine, as they had countless other foods. Its attractions were manifest. Not only was it tasty and filling, it was also simple. The ingredients could either be bought cheaply or grown without difficulty; and they were convenient to eat, too. The balls are not easily squashed; and – unlike a great many dishes – they could be served either hot or cold.

The Jews who came to Palestine from Eastern Europe, especially during the Fifth Aliyah, or wave (1929-39), were more hostile. Suspicious of anything they regarded as ‘Arabic’, they stuck doggedly to their own cuisine, shunning falafel as an ‘alien’ – even ‘unclean’ – dish.

By the independence of Israel in 1948, falafel was still far from being accepted as a Jewish, much less ‘national’ food. Though recipes extolling its nutritious qualities appeared frequently in newspapers such as Haaretz, its popularity was patchy. Two developments, however, ensured its transformation.

The first was the introduction of rationing. Struggling to cope with the influx of new immigrants, and lacking both food and money, Israel introduced a strict programme of austerity (Tzena’) in 1949. Staple foods – such as margarine and sugar – were rationed; while meat consumption was limited. This boosted falafel’s popularity. Not only was it a good source of protein, but its ingredients were also readily available even to the poorest families. Though some continued to treat it as a somewhat ‘foreign’ import, a growing number of cookbooks began to feature recipes.

The second was the arrival of ever-growing numbers of Jews from Yemen, Turkey and North Africa. In 1949, 100,690 people arrived in Israel from these regions (41 per cent of all immigrants in that year), up from 12,517 (12 per cent) the year before. Having already encountered falafel in their native countries, they happily brought it with them to their new home and cooked it without seeing anything ‘strange’ about it. This had an immediate effect. Not only did it help to convince their still sceptical co-religionists that falafel genuinely was a suitable food for Jews, but it also allowed falafel to shed its associations with the Arab peoples. This was something the Israeli government was glad to encourage. In the wake of the Arab-Israeli War of 1948-9, there was a concerted effort to foster a distinctive sense of Israeli national identity and to separate its culture and cuisine from that of its neighbours. Helped by the fact that many Yemenis soon started opening falafel stalls, the Israeli government avidly promoted the idea that falafel had been imported not from Egypt but from Yemen. It was a patent falsehood, but it served its purpose.

The consumption of falafel took off. Before long, it had become so popular – and so closely identified with the Israeli state – that songs were being written about it. Perhaps the best known is Dan Almagor’s Ve-Lanu Yesh Falafel (‘And we have falafel’), released in 1958. Made famous by the singer Nissim Garame, it was unambiguous in claiming falafel for Israel: ‘Every country in the world has a national dish that everyone knows’, it began:

Every child knows that macaroni is Italian.
The Austrians in Vienna have tasty schnitzel
and the French eat frogs …
And we have falafel, falafel, falafel,
a present for Dad,
even Mum buys it here,
for old Grandma we’ll buy half a portion.
And today even the mother-in-law will get falafel, falafel,
with lots and lots of peppers.

By the 1960s, this process of ‘nationalisation’ was complete. Falafel had been enshrined as the Israeli dish par excellence. It was proudly served on long-haul flights by El Al, the Israeli national carrier; while haute cuisine chefs prepared special versions for entries in international cookery competitions – much to the chagrin of Israel’s Palestinian neighbours.

By then falafel had begun to reach more distant shores. Waves of migration – principally of Arabs and Turks – had taken it through Europe. In Germany in particular, where a large Turkish population put down roots, it enjoyed huge popularity. At first it was a dish consumed principally by migrants; but by the early 1970s, the appearance of Turkish food stalls and restaurants made it available to a growing number of hungry Germans, which led to yet another transformation of its recipe. 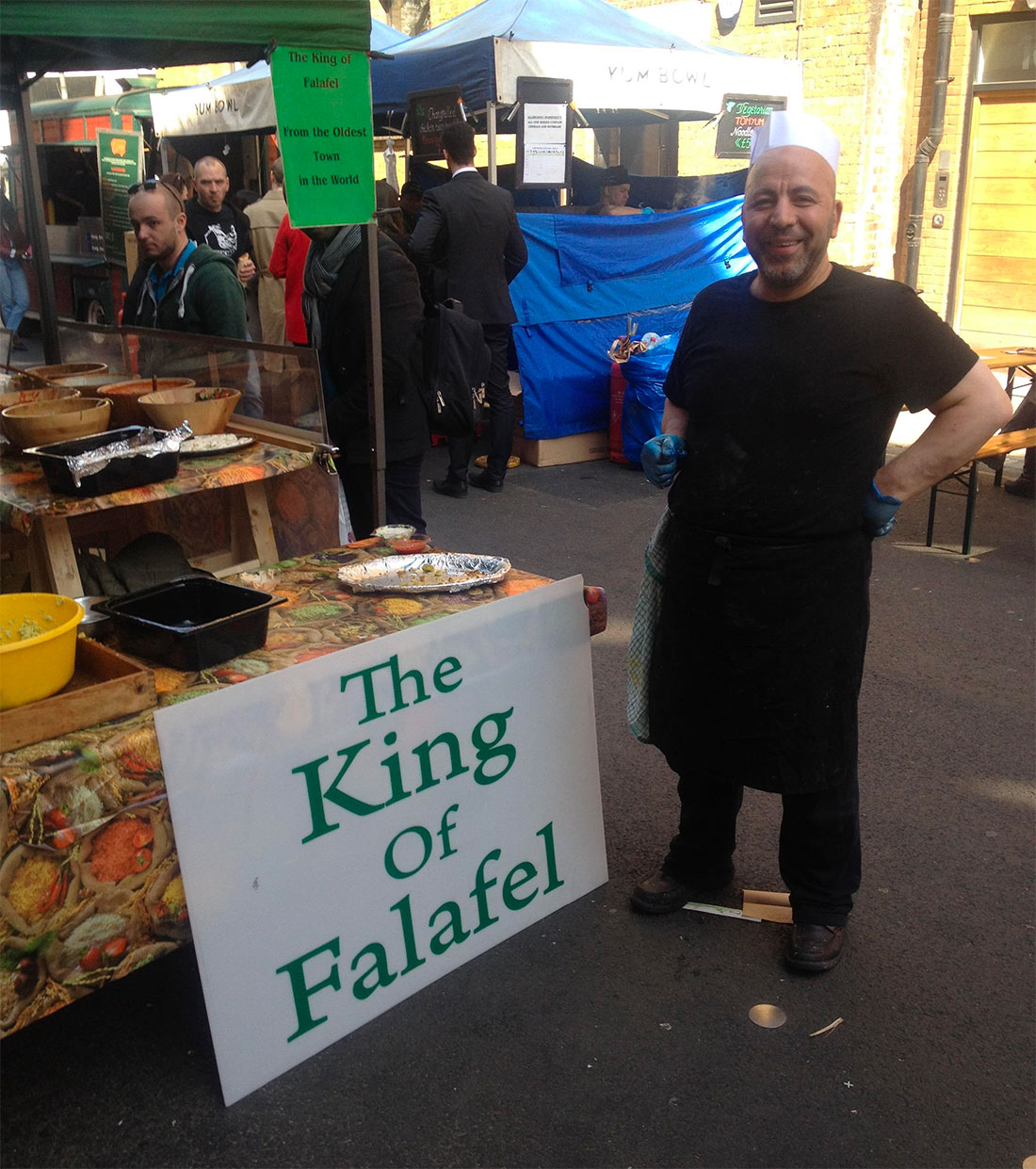 Even more strikingly, falafel also made it to the United States. There, its progress was slow. Throughout the 1960s and 1970s, it remained the preserve of migrant communities. But in the last decades of the 20th century, it began to be appreciated by a wider audience. This was, at first, marked by a rather ‘orientalising’ approach. For many consumers, falafel remained something exotic and strange. But, with time, as cultures mixed and social divisions disappeared, these associations were overcome. Now, it has become so much a mainstay of American cuisine that it is hard to think of a time when it was anything other.

This is encouraging. Though falafel remains a deeply divisive food in the Middle East, its fate elsewhere in the world shows that it can also overcome differences. Despite all the debates about where it came from and whose it ‘really’ is, what matters is that it is something we all share and that we can all enjoy. If we keep eating it with that in mind, falafel can perhaps bring us together, rather than keeping us apart. 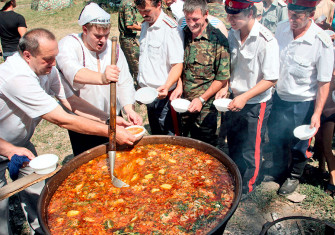