What Influence has the BBC had on History?

Founded as the British Broadcasting Company in October 1922, the BBC has sought to ‘inform, educate and entertain’ for a century. Facing an uncertain future, what impact has it had on the past?

‘The BBC has always done far more than reflect the contemporary’

To write the history of the BBC, Asa Briggs once said, is ‘to write the history of everything else’. The relationship, he suggested, is more than one of background and foreground. Radio and television are like corridors through which the whole of life passes. If we’ve witnessed the dramas of history – wars, natural disasters, sporting spectacles – it’s generally been through the media. Yet the BBC has always done far more than reflect the contemporary. Since 1922 it’s been one of the most influential forces shaping it.

The BBC’s founding father, John Reith, set out what he saw as broadcasting’s true purpose. In the wake of a destructive global conflict, he believed it was radio that could draw out ‘everything that is best in every department of human knowledge, endeavour and achievement’. Crucial to this enterprise was Reith’s certainty that supply could shape demand: ‘The more one gets, the more one wants.’ In time, those tuning in would be nudged towards an appreciation of more – and better – things. The purpose was not to describe the present but to enrich it.

The BBC’s determination to bring into millions of British homes not just that famous triumvirate of ‘information, education and entertainment’ but what one insider described as ‘the unfamiliar on a tide of the familiar’ is what enabled it to alter the boundaries and textures of national life. In the 1920s and 1930s the BBC’s commitment to regular doses of classical music had a transformative effect on what had so recently been a ‘land without music’. During the Second World War its steady supply of distracting entertainment and reliable news was instrumental in maintaining morale. Later still, a generation of documentary makers and dramatists increased public awareness of poverty, homelessness and racism. While all this was going on, the BBC’s schedules have given shape and character to domestic life, altering mealtimes and establishing the rhythms of our days and weeks and years. When I was a baby I was put to bed when The Archers came on. Now, I cook my evening meals to it.

The Corporation’s continued centrality to British life has achieved something else of national import; it has made possible a succession of shared moments and has helped a sense of the collective to survive.

On 21 June 1948 the Empire Windrush arrived at Tilbury Docks in Essex carrying nearly 500 West Indians. The event, which ushered in an era of mass immigration, was covered by the BBC on Television Newsreel, Britain’s first regular news programme. Given that fewer than 50,000 combined radio and television licenses were held in 1948, only a small percentage of Britain’s population saw the coverage; but in the years that followed, the BBC would be at the forefront of shaping the experience of West Indians in Britain, for better and worse.

In 1939 the BBC’s Calling the West Indies featured West Indian troops reading letters to their families in the islands. The programme later became Caribbean Voices, showcasing West Indian writers, but it was not until the postwar era that the Corporation began to focus on thorny issues surrounding race relations. In We See Britain and West Indian Diary (1949), West Indians discussed their experiences of Britain for the benefit of those considering immigration. The British press routinely linked West Indians to crime and unemployment and the BBC was no exception. In 1955 Television Service ran a story on ‘Our Jamaican Problem’.

The BBC did commission programmes examining the impact of immigration upon ‘traditional’ Englishness. In 1952 Race and Colour: A Scientific Introduction to the Problem of Racial Relations sought to educate audiences on the science of race, the first television programme of its kind. Audience surveys yielded disappointing results; viewers were more concerned with the social impact of immigration.

In response, the producer Anthony de Lotbiniere made Has Britain a Colour Bar? Broadcast in 1955, it focused on West Indians in Birmingham. This was followed in 1956 by A Man from the Sun, one of the first dramas to deal with the harsh realities of the immigrant experience from the West Indian perspective (although it was written by a white Englishman, John Elliot). It met with mixed reviews from West Indian audiences: ultimately, depicting the experience of West Indians in Britain was best left to the West Indians themselves, as programmes such as 1992’s Black and White in Colour demonstrated.

‘During the war, most Indians used the radio for news hostile to Britain’

The BBC’s Eastern Service began wartime broadcasting to India from May 1940 onwards. Initially on air for ten minutes daily, broadcasting in Hindustani, it expanded rapidly, launching programmes in English, Bengali, Marathi, Sinhalese and Tamil. The English-language programmes were intellectual, not targeted at a mass Indian audience or to British officials stationed in India, but at university students and the English-speaking elite. Contributors included George Orwell, E.M. Forster and T.S. Eliot, along with left-wing Indian intellectuals and authors, including R.K. Narayan, Ahmed Ali, M.J. Tambimuttu, G.V. Desani and Attia Hosain. Meanwhile, All India Radio (known since 1957 as Akashvani) was established, with Lionel Fielden from the BBC placed in charge.

The onset of the Second World War and India being declared a belligerent by the Viceroy, Lord Linlithgow, without consulting the Indian National Congress, changed the significance of listening to the radio in the country. This included the BBC, but also Axis radio stations. After the Japanese occupation of Singapore in February 1942, Orwell noted: ‘India became for the time being the centre of the war, one might say the centre of the world.’ In 1940s’ India, intersections between political positions and ‘causes’ generated a shifting landscape of motivation, making it difficult to affix a singular identity on the Indian people; were they nationalist, anticolonialist, antifascist, communist or imperialist? The BBC played a significant role in disseminating antifascist messages but said little about what would become of India in the postwar years, or indeed its colonial subjecthood during the war. Topics like the man-made, war-induced 1943 Bengal Famine could not be discussed on air.

The first listener research conducted by All India Radio in 1940 across five Indian cities surveyed 13,507 listeners. It revealed that most Indians were using the radio for news hostile to Britain. During the war, German broadcasts in English and Hindustani were widely listened to (though not always believed). The BBC, then, was not the only player in the field, but studying its wartime broadcasts to India reveals how much competition there was across the airwaves for the ‘hearts and minds’ of Indian people.

Jamie Medhurst, Author of The Early Years of Television and the BBC (Edinburgh University Press, 2022)

For half of the 20th century the BBC was the sole national broadcaster, first on radio and then television, until the arrival of competition in the form of Independent Television (ITV) in 1955 broke the Corporation’s monopoly. With the rising popularity of streaming services, ‘content’ replacing ‘programmes’ and an increasingly fragmented audience, the Corporation’s centenary is a good time to reflect on the BBC’s importance and relationship to history.

If not exactly holding up a mirror to society, BBC television has certainly resonated with the social, cultural and political changes that have taken place within Britain over the course of the 20th century. To take the 1950s and 1960s as an example, the 1955 documentary Has Britain a Colour Bar? – commissioned as part of the Special Enquiry series – was broadcast with this comment in the Radio Times: ‘The recent immigration of many thousands of West Indians has focused attention on the problems of our coloured citizens. Have we the jobs for them – or the houses? Do we give them a fair deal?’ Changing attitudes to authority and the end of the age of deference in postwar Britain were evident in programmes such as the satirical That Was The Week That Was, first broadcast in 1962, which lampooned British politics, including the Profumo affair. Shifts in cultural and social norms were often debated and highlighted through the BBC’s Wednesday Play and Play for Today strands and Peter Watkins’ pseudo-documentary The War Game was highly critical of government policy on nuclear arms and civil defence to the point that it was banned (for reasons still debated). Produced in 1966, it was not shown until July 1985, to coincide with the 40th anniversary of the bombing of Hiroshima.

The BBC has mediated British society for 100 years. Attempts by the current government to weaken its role as a major public service broadcaster with a mission to inform, educate and entertain – a mission that remains relevant and necessary  – threatens its future. We could live to regret it. 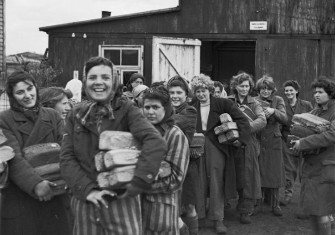 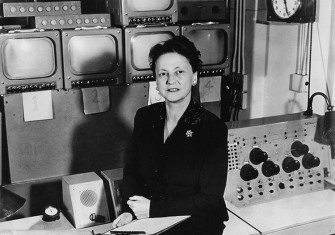 The BBC Book of War