The Hampton Court Conference opened on January 14th, 1604. The most important product of the conference was the King James Bible. 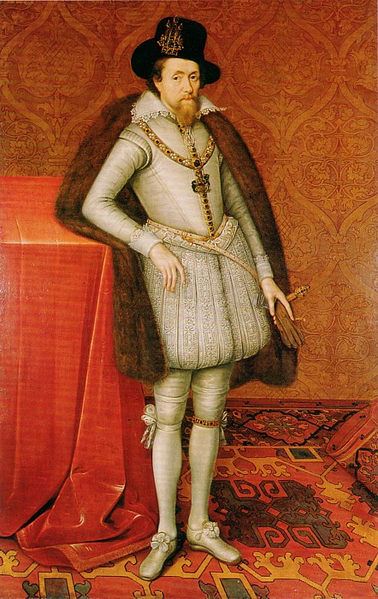 The English Puritans in 1603 had high hopes that the new Scottish king, James I, would push the Church of England nearer to Calvinism. As he rode south to London, James was presented with the Millenary Petition, signed by a thousand of ‘the godly’, asking him as the nation’s physician to heal its spiritual ills. These included such practices in church as bowing at the name of Jesus, the ring in weddings, the sign of the cross in baptism and too much Roman Catholic talk of priests and absolution. There was a surprising plea to have ‘the longsomeness of service abridged’, but also a request for more sermons and for stricter observance of the sabbath.

The King had a lively intelligence, a sharp tongue and a high regard for the English Church with its stately retinue of supportive bishops and himself as supreme governor. At the same time he was a shrewd man, with much experience in Scotland of reconciling moderates with radicals in religious matters, and though he had once described Puritans as ‘very pests’ in Church and State, he explained that he had meant only the most extreme and irritating ones. He decided to preside personally over a formal conference at Hampton Court, attended by Archbishop Whitgift, who had been at Canterbury for twenty years, and eight bishops in their uniform of caps and surplices, which Puritans disliked. With them were five deans, including Lancelot Andrewes of Westminster, and four carefully selected representatives of moderate puritanism. They were John Reynolds, Master of Corpus Christi, Oxford, and former Dean of Lincoln, Laurence Chaderton, Master of Emmanuel College, Cambridge, a Suffolk rector named John Knewstubs (who denounced surplices as garments the priests of Isis had worn) and a silent Buckinghamshire clergyman called Thomas Sparke. Bishops and Puritans knew each other well and in several cases were old friends.

In freezing January weather, proceedings began in the royal presence chamber, with lords of the Privy Council as spectators. The King pronounced himself delighted to be among ‘grave, learned and reverend men’, though he gave both bishops and Puritans the rough edge of his tongue as discussions proceeded over three days. For instance, when the bishops suggested that a Church settlement that had lasted forty years was not likely to need changing, he said acidly that the fact that a man had suffered from the pox for forty years was no reason for denying him a cure now. However, he emphasised his commitment to episcopacy. There was to be no question of introducing a Scottish presbytery, which the King said agreed as well with monarchy as God and the Devil. ‘If I mean to live under a presbytery, I will go into Scotland again.’ James refused to alter certain Church articles that Puritans opposed, but he promised to support a sermonising ministry: ‘we mean to plant preachers’. With the gift of the gab himself, he had a high regard for preaching and thought the Church of England’s standards needed improvement. He also agreed to allow the puritan ‘prophesyings’, or clerical Bible discussion sessions, which Queen Elizabeth had banned. He ended with a demand for quiet and obedience, to which all present assented.

A royal proclamation in July told ‘all our subjects’ that ‘there appeareth no cause why the form of the Service of God wherein they have been nourished so many years should be changed’ and admonished them ‘in general to conform themselves thereunto, without listening to the troublesome spirits of some persons who never receive contentment, either in civil or ecclesiastical matters …’.

The most important product of the conference was the King James Bible. John Reynolds suggested that there should be ‘one only translation of the Bible to be authentical and read in church’. There were at this time two rival English translations, the Elizabethan Church’s official Bishops’ Bible of 1568 and the Geneva Bible, older and more to the Puritans’ liking. James detested the Geneva Bible. Grasping the opportunity to be rid of it, he espoused ‘one uniform translation … to be done by the learned of both universities’ and reviewed by the bishops and ‘the chief learned of the Church’, finally to be ratified by himself and then ‘to be read in the whole Church, and no other’. The result was the Authorised Version, eventually published in 1611.

If Puritans were at first disappointed by the conference, it soon emerged that what the new regime really wanted was peace and quiet, and that there was no intention of proceeding against anyone who was not a blatant nuisance. By 1625 only two ministers had been deprived of their livings for nonconformity and the reasonable climate fostered by the King had drawn the Puritan sting. For the time being.