The Great Eastern in Storm, September 1861

T.F. Chambers describes the fate of the first large steamship to be built of iron.

The Great Eastern was launched on January 31st, 1858. It was a remarkable ship in many ways and represented a transformation in both ship design and propulsion. She was historically important because she was the first large steamship to be built of iron and was powered by paddle wheels, propellers, and sail.

Designed by J. Scott Russell, an influential man in naval architecture, the Great Eastern was built by the famous English civil engineer, Isambard Kingdom Brunei. Russell’s design for the hull was based on the wave-line principle, by which some lines of the ship were related to the shape of ocean waves. 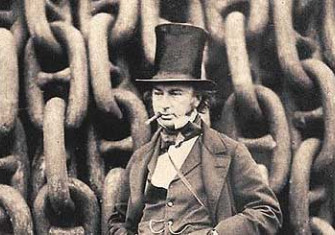