Gibraltar: A Rock and a Hard Place

As the dispute continues between Spain and Britain over the jurisdiction of the waters around Gibraltar, Ben Wilson explains the Rock’s role in British history since its acquisition in 1713. 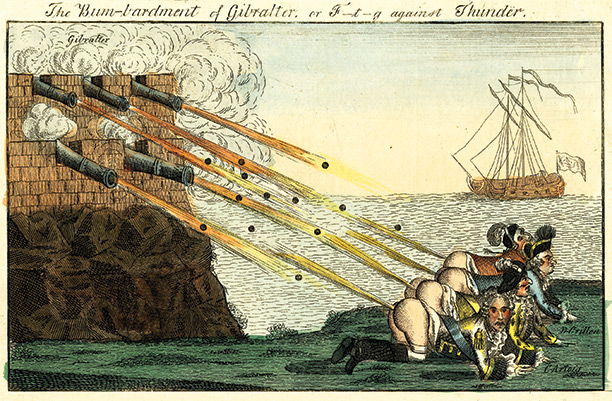 Recent events in Gibraltar have reminded us that this is the 300th anniversary of the Treaty of Utrecht, in which, among other things, Spain ceded the Rock to Britain forever. What is often forgotten is the ambiguous position Gibraltar held in British politics. Seven times in the first 15 years of British rule did ministers consider bartering it. But during that period Anglo-Spanish relations deteriorated, reviving hopes of an Elizabethan-style descent on the Spanish empire in the New World. It culminated in the War of Jenkins’ Ear in 1739. In these years of virulent anti-Spanish feeling and war fever, Gibraltar was loved by the British public because, whatever its military value, it was a thorn in the enemy’s side.

During his reign George III moaned about the ‘constant lurking enmity’ that existed between Britain and Spain. He longed to be rid of the bone of contention: Gibraltar. His chance came in 1783 in the aftermath of the American War of Independence, when Britain was forced to cede Florida and Minorca to Spain. Two things stood in his way. First, Gibraltar had become the emblem of national resilience. Between 1779 and 1782 the heavily outnumbered British garrison on the Rock withstood one of the longest sieges in history and the Navy ran enormous risks breaking the blockade to relieve it. Public opinion would not countenance betrayal of such heroics. Second, and rather amusingly, the French were stout defenders of the British position on the tip of the Iberian Peninsular, knowing that they would profit from perpetual Anglo-Spanish friction.

But what of its military value? Gibraltar was expensive to defend and it could not accommodate a fleet. It was long known that Britain needed to have a presence in the Straits if it was to count as a major naval power. English warships had operated in the region since the early 17th century, convoying the country’s burgeoning trade in the Mediterranean and defending merchant ships against the predations of Barbary corsairs. Between 1661 and 1684 the Royal Navy used Tangier, then an English possession. But it was unsatisfactory and the Navy preferred ports such as Cadiz, Malaga, Messina or Malta; Leghorn (Livorno), in particular, was favoured long into the 19th century. As a result of Utrecht, Britain got Minorca, which has an excellent naval harbour and underwrote its dominance of the western Mediterranean. With Minorca and Gibraltar in its possession the Navy could safeguard trade, bottle up the French fleet at Toulon and threaten Spain. Frigates scouting off the Rock gave intelligence of enemy movements.

When Nelson passed the Straits in 1798 and entered the Mediterranean it had been closed to the Royal Navy for over a year. As Nelson’s modest squadron hunted Napoleon in the desperate summer of 1798 the Navy had no base east of its toehold at the Rock. Nelson’s great victory at the Nile restored British dominance in the Mediterranean. The British fightback would scarcely have been possible without the Rock. Admiral St Vincent put his finger on it when he said ‘the only use of Gibraltar is to furnish the Navy of Great Britain with supplies, and thereby enable it to maintain the empire in the adjacent seas’.

Gibraltar was useful not as a place from which to close the Straits, which was impossible, but as the springboard for operations. It is no coincidence that many of the Navy’s great battles, including St Vincent and Trafalgar, were fought nearby. This was further evident in 1801 when Admiral James Saumarez attacked a French squadron sheltering under the Spanish guns in Algeciras Bay, in sight of Gibraltar. Saumarez suffered a mauling and retired to the Rock. Six days later a reinforced Franco-Spanish squadron left the Mediterranean at night. But the yards at Gibraltar had raced to repair the British ships. Saumarez went in pursuit, sending HMS Superb ahead. The 74-gun warship caught up with the rear of the enemy, sailed between two 112-gun Spanish leviathans and opened fire. The Spanish engaged in a midnight battle with their assailant. Unbeknown to them Superb had pressed on and captured another enemy vessel. They were pummelling each other to death. When they exploded they illuminated the Rock.

It was an extraordinary victory and a testament to the flourishing of Gibraltar. A few years later, in 1805, the French admiral Villeneuve was spotted trying to sneak through the Straits, the first move in Napoleon’s attempted invasion of Britain. The vital intelligence was rushed to Nelson, who sped in pursuit. It marked the beginning of the Trafalgar campaign. Within months HMS Victory returned to Gibraltar, this time shattered by battle and bearing the dead body of Nelson.

The Rock became the symbol of Britain’s maritime dominance in the 19th century, the lynchpin in a string of bases, telegraph hubs and coaling stations that encircled the globe. But by the end of the century its future was again in doubt. In an age of long-range guns and submarine warfare Gibraltar seemed untenable. However the defences and docks at the Rock were beefed up and in 1906 it became the base of the Atlantic Fleet.

As so often in the past, Gibraltar’s importance was only fully appreciated when Britain’s fortunes were at their lowest ebb. In the Second World War it was once again the Royal Navy’s gateway to a hostile Mediterranean. It allowed the Allies to contest for control of that sea and mount campaigns in North Africa. Most important of all was its role as a haven in the Battle of the Atlantic. Without the shelter of the Rock the fortunes of the Royal Navy, and with it Britain, would have been very different. In 2013 the strategic value of Gibraltar has all but vanished; but the ties between Britain and its promontory, forged in the fires of war, are as strong as ever.

Ben Wilson is the author of Empire of the Deep: the Rise and Fall of the Royal Navy (Weidenfeld & Nicolson, 2013)