The relationship between the very different expanses of the Atlantic Ocean and the Mediterranean Sea began long before Columbus. 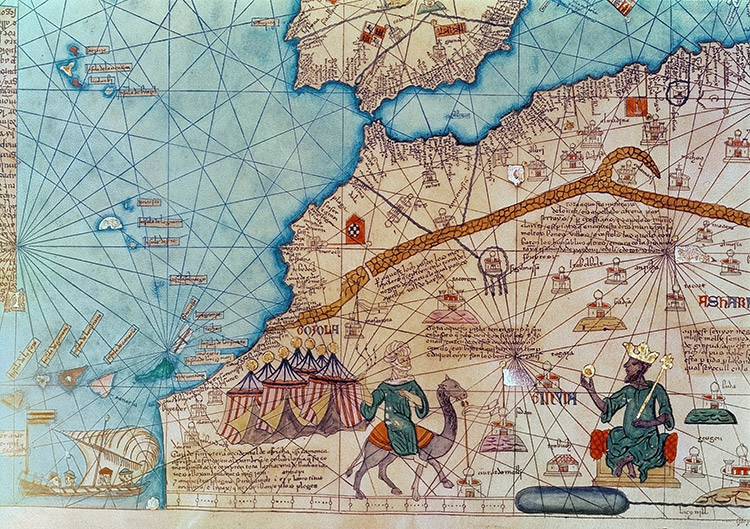 The explosion in the study of both Mediterranean and Atlantic history, not to mention the history of other seas and oceans, has left one important issue unresolved. What is the relationship between the bodies of water that flow into one another?

The links between the Mediterranean and the Atlantic have been largely neglected. Barry Cunliffe’s latest addition to his beautiful collection of volumes about early Europe and the seas around it is, therefore, very welcome. Even if it reprises themes from earlier books, notably his Facing the Ocean, the extension of his argument into the Mediterranean enables him to present a new angle on both the ancient and the medieval Atlantic. Indeed, one of his great contributions has been the insistence that the history of the Atlantic does not begin in 1492, nor with the Portuguese conquest of Ceuta in 1415, but that there is a rich history of the early Atlantic, even if, the Norsemen excepted, it does not stretch across the entire space until the arrival of Columbus.

The great challenge is how to link the history of two seas with very different characters. On the one hand there is the closed Mediterranean, the theatre of intense maritime trade encompassing just about every corner. Then there is the Atlantic, an open sea where wind systems, tides and currents all presented very different problems from the Mediterranean, where the merchants were more selective about which parts of the coastline of Atlantic Europe or North Africa they visited.

There are two ways global historians have tended to operate and Cunliffe oscillates between them. One is to emphasise comparisons, the other to stress connections. The latter approach brings more novel results. Cunliffe dwells on the extraordinary archaeological evidence from Huelva, the Atlantic port west of Gibraltar, where a massive hoard of bronze implements from around 900 BC was found in its river mouth, revealing contacts deep into the Mediterranean. This then takes him into one of his favourite themes, the mysterious territory of Tartessos, perhaps the Tarshish that appears so often in the Bible, to which the Phoenicians, and later the Greeks, travelled in search of the silver in which it was said to be extraordinarily rich. For the Phoenicians this area became the gateway to their own new world: they founded a base of their own at Cádiz; they traded northwards as far as Galicia in search of the tin they needed in order to make bronze alloys, though whether they really reached Cornwall is less certain; and they traded southwards along the Moroccan coast as far as Essaouira, in search of purple-yielding murex shellfish and other goods. The Straits of Gibraltar, with their strong inflow of Atlantic water, are a far more dangerous tract than modern refugees in their flimsy boats anticipate. The story of how merchants from Genoa and Catalan Majorca broached the straits at the end of the 13th century and created a regular route linking the western Mediterranean to wool-rich England and cloth-rich Flanders is given due prominence.

Trade dominates the book, but does not explain everything. Cunliffe plausibly insists that a gene which prompts people to travel and seek out adventure is a powerful explanation for some of the most daring journeys he describes, notably Norse voyagers setting out for Greenland and even the coasts of America.

Though it seems odd to entitle the book On the Ocean when it deals with two conjoined seas, it is an absorbing and lively account of the early Atlantic and Mediterranean. Importantly, it reflects the latest research and delves deeply into the motives of those who sailed them: not just where and how they travelled, but what fears these seas evoked.

On the Ocean: The Mediterranean and the Atlantic from Prehistory to AD 1500
Barry Cunliffe
Oxford University Press 640pp £30

David Abulafia is Professor of Mediterranean History at Cambridge University and the author of The Great Sea: a Human History of the Mediterranean(Allen Lane, 2011).