Galileo observes the satellites of Jupiter

The astrononer made a remarkable discovery on January 7th, 1610. 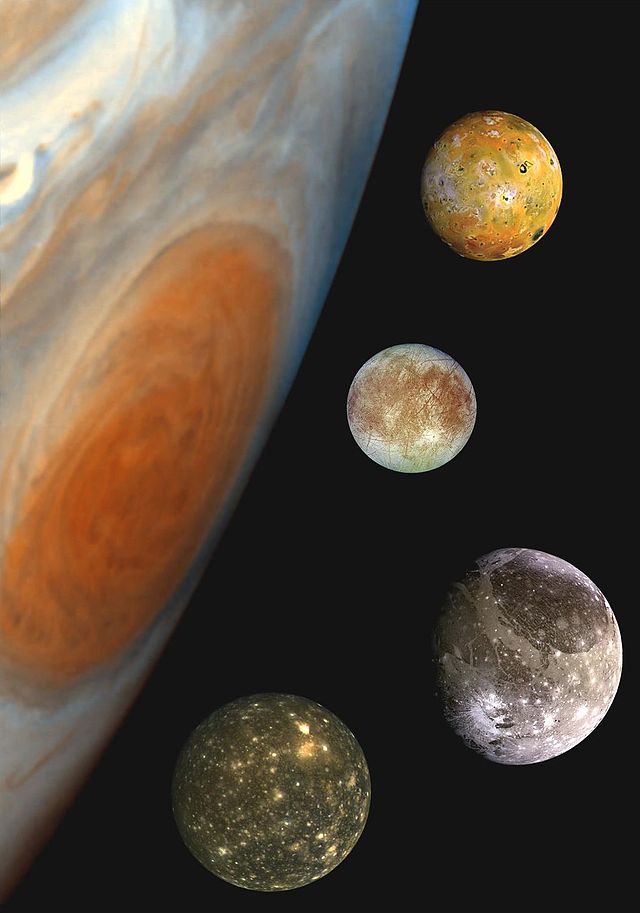 The telescope is derived from the pairs of spectacles with glass lenses which were made in medieval Europe to enable people to see further and more clearly than they could without them. By 1608 the first spyglasses had appeared and a Flemish spectaclemaker in Holland who applied to the States General for a patent on an ‘instrument for seeing far’was quickly challenged by two other Dutch spectacle-makers, who submitted their own claims. Early in 1609 word of the new devices reached the professor of mathematics at Padua University in the Republic of Venice.

His name was Galileo Galilei and he was in his mid-forties when he heard from the influential Venetian humanist Paolo Sarpi that a Dutchman was on his way to Venice hoping to sell one of the new instruments to the doge, Leonardo Dona. Galileo was immediately galvanised and asked Sarpi to caution the doge and the Venetians not to accept a device from anyone else until he could show them a better one of his own. Sarpi did as he was asked and Galileo worked frantically trying out different pairs of spectacle lenses fixed into a wooden tube, grinding his own lenses until he worked out an effective arrangement. He quickly improved on his first instrument and the one he and Sarpi demonstrated to the doge in August worked far more effectively than any of its predecessors.

Galileo and Sarpi took Doge Dona and his advisers to the top of the tower of St Mark’s and pointed the new telescope towards Padua. The doge was astounded to be able to see the tower at the centre of the city more than 50 kilometres away. After gazing across Venice itself, they looked far out into the Adriatic where the Venetians saw ships that would not be visible to the unassisted eye for another two hours or more. The party returned to the doge’s palace and, far from demanding a high price for his invention as expected, Galileo shrewdly offered the telescope to Venice as a gift. The present was eagerly accepted and Galileo went away with his salary at Padua almost doubled and a lifetime tenure in his post.

Galileo and Sarpi had taken care to stress the military advantages of the telescope. In his letter to the doge confirming his gift, Galileo drove home the point that the new instrument would enable Venetian ships at sea to discern the strength of an enemy fleet at a far greater distance than before and similarly allow an army on land to look inside distant strongholds and watch the movements of enemy troops from much further away.

Galileo, however, turned his telescope peacefully to the skies. He started by observing the Moon, on which he discovered mountains and craters, not an even surface as was believed at the time. Then, on January 7th, 1610, while looking at Jupiter, he saw three small stars close to it, two to the east of the planet and one to the west. The next night he looked at them again and all three were to the west. Watching on subsequent nights he saw them in varying positions and realised that they were ‘wandering’ round Jupiter, as he later put it, moving around it in orbit. On January 13th he discovered a fourth satellite or moon.

Galileo hurried to make his discoveries known. In March 1610 he published 500 copies of a 24-page pamphlet called Sidereus nuncius (The Starry Messenger), which sold out almost instantly, created a sensation all over Europe, and was soon reprinted. Galileo came from a Florentine family and he dedicated his pamphlet to Cosimo II de Medici, Grand Duke of Tuscany, calling his moons of Jupiter the ‘Medicean Stars’. The flattery worked and he was appointed Chief Mathematician and Philosopher to the grand duke. This relieved him of all teaching responsibilities – he had always detested teaching at university – and assured him of a satisfactory income while he continued his experiments in astronomy. In the autumn of 1610 he abandoned Padua and moved to Florence.

Galileo’s discoveries made it even more difficult to continue accepting the old picture of the universe, with the Earth stationary at its centre. He accepted the Copernican theory that the Earth and the other planets revolve around the Sun. This contradicted the teachings of the Roman Catholic Church and embroiled Galileo in years of trouble with the Inquisition. Eventually tried in Rome in 1633, he was condemned for believing and teaching heresy and forced under threat of torture to recant his opinions. He spent the rest of his life under house arrest near Florence, becoming increasingly ill and going blind before his death in 1642 at the age of 77. The Church admitted in 1992 that its treatment of him had been wrong.