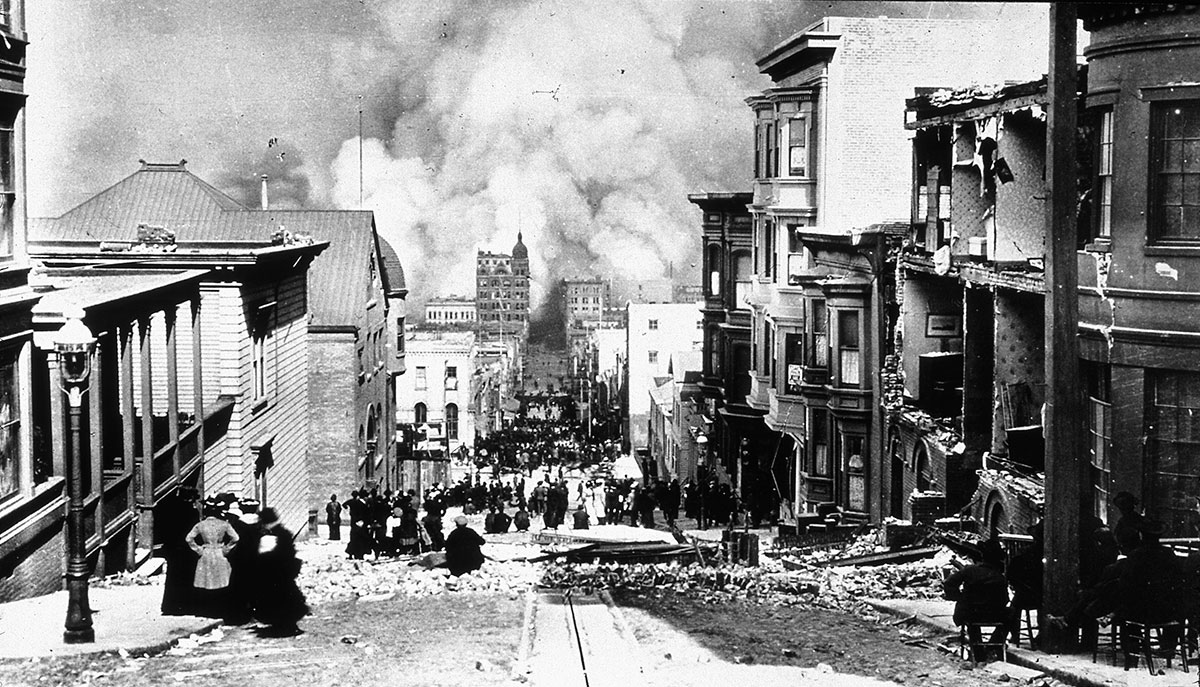 A hilltop view of a smouldering city, following the devastating earthquake of April 18th, 1906.

The earthquake struck San Francisco at 5.12 am, a tremor lasting 42 seconds and registering 8.3 on the Richter Scale, its epicentre close by, two miles offshore. Here, on this section of Sacramento Street, the damage is not overwhelming, with just the fronts of two small houses spilled into the roadway, across the tramlines of one of the city’s cable car routes.  Now, later on the same day, April 18th, 1906, people have come outside to look at what is happening at the bottom of the hill. Fires have been started by ruptured gas mains, but there is no sense of panic yet. A group of men on the right have brought chairs out so they can sit to watch the spectacle.

Only later will they start to realise the real threat to their homes and indeed the whole city. It is not merely the gas pipes that the earthquake has snapped, but the water mains, too; there was no water left with which to fight the flames. Moreover, as noted by the writer Jack London late that afternoon from a boat out in the bay: ‘It was dead calm. Not a flicker of wind stirred. Yet from every side wind was pouring in upon the city … Heated air rising made an enormous suck. Thus did the fire of itself build its own colossal chimney through the atmosphere.’ The army soon moves in, to enforce a curfew and a shoot-to-kill order against looters. It also starts to try to create fire-breaks by blowing up buildings with dynamite.

Later it emerged that these explosions themselves were the cause of about half the fires that were to destroy 80 per cent of the city in four days of burning. People also resorted to setting fire to their own homes; insurance policies covered fire but not earthquake damage. At 1 am on April 19th Jack London was in Union Square, where he ‘saw a man offering a thousand dollars for a team of horses. He was in charge of a truck piled high with trunks from some hotel … There were no horses.’ Those trunks may have become part of the insured losses amounting to the equivalent of $7 billion. About 3,000 lost their lives but the philosopher William James was there a week after the earthquake and wrote to his brother in England, the novelist Henry, that what he saw confirmed his opinion about calamities: ‘The pathos and agony is in general solely felt by those at a distance … Somehow it couldn’t have chosen a better place, where everyone knew about camping, and was familiar with the creation of civilizations out of the bare ground.’ The army went on managing relief efforts until the end of June for the 300,000 left homeless out of a total population of 400,000.

In the rebuilding that followed, safety precautions to guard against later quakes were soon ignored, but the opportunity to relocate the population of Chinatown, which had been flattened, was seized. The only consolation was that Arnold Genthe, the photographer of this scene on Sacramento Street, had taken hundreds of pictures of the Chinese quarter, which still survive. Seismologists reckon the gap between major quakes on the San Andreas Fault that runs up and down the Californian coast is about 150 years, so with luck San Francisco has about another 40 years before the Pacific tectonic plate again moves significantly northwards against that of North America.