A famous vessel from an unfamiliar perspective. 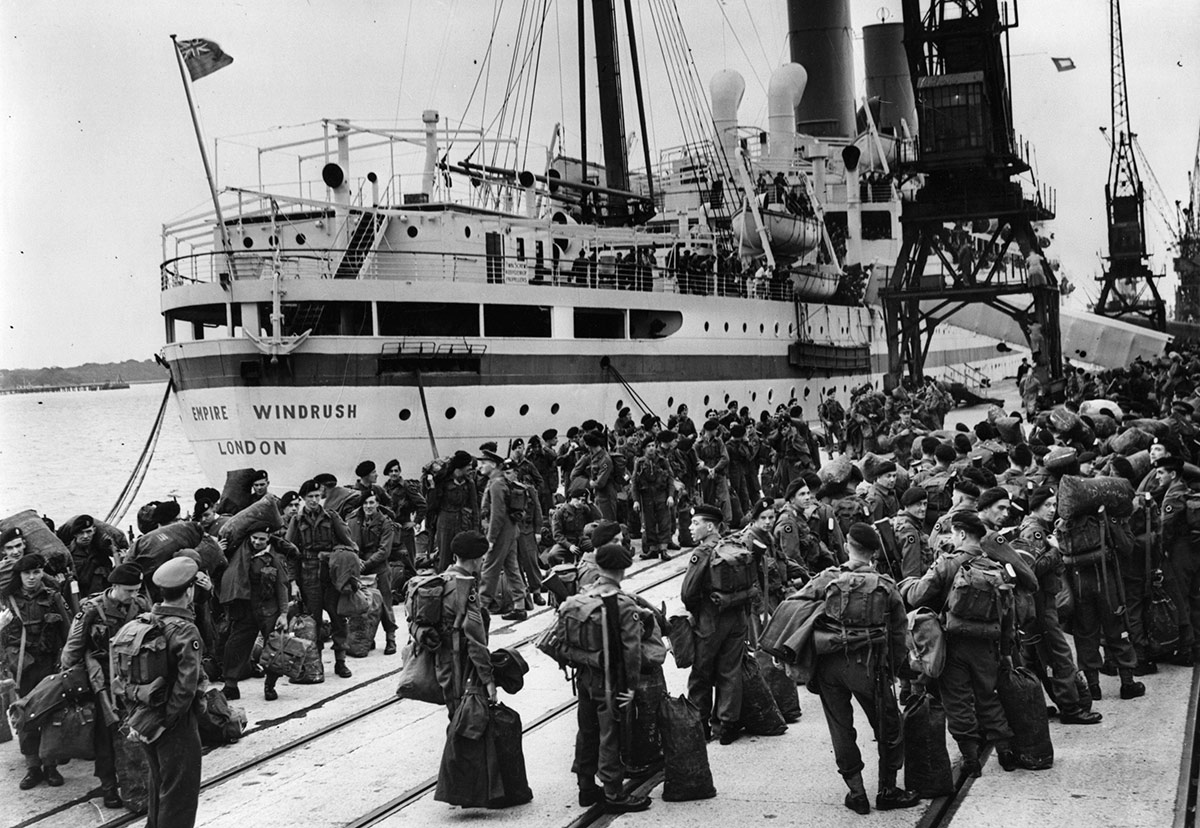 Men of the Gloucestershire Regiment, the 8th King’s Royal Irish Hussars and the Royal Engineers embark at Southampton in October 1950 for Korea, to fight as part of the United Nations forces tasked with preventing the seizure of South Korea by the Communist North. Fifteen nations will send contingents but by far the biggest comes from the United States, reflected in the 142,000 Americans killed in the war, compared with the combined total of 17,000 dead from the other 14 countries. The disastrous opening phase of the war is over and the Americans have been able to drive the North Koreans back up the peninsula after the daring landings in mid-September at Inchon, 200 miles behind enemy lines, devised by General Douglas MacArthur. Since British National Servicemen are only allowed to serve abroad over the age of 19, many reservists, who fondly imagined they would never have to fight again after 1945, have had to be recalled. They must be hoping that by the time they arrive all they will be required to do is a little light mopping up. No such luck.

Their sense of a return to somewhere they had hoped never to revisit will be strengthened when they discover the identity of the ship on which they will travel. She began life as the Monte Rosa of the Hamburg Sud-America Line in 1930, then from 1934 to 1939 was commandeered by the Nazis’ Kraft durch Freude (Strength through Joy) organisation. This sought to fill the people’s leisure hours so that there was as little time as possible left to start wondering about where the Third Reich might really be going. Membership reached 30 million or more but only a lucky 150,000 had actually been cruising on the Monte Rosa and her sister ships by the time war was declared. After serving as a troopship during the invasion of Norway and then as a support ship for Tirpitz as she skulked in a Norwegian fjord, she became war booty, was rechristened the Empire Windrush and found herself once more a troopship. It was a better fate than befell another Kraft durch Freude ship, the Wilhelm Gustloff, sunk by a Soviet submarine in the Baltic while trying to rescue Germans from the advancing Russian army in 1945, resulting in probably the largest-ever loss of life in a single ship sinking: 9,400.

MacArthur ignored Chinese warnings about approaching too close to its border on the River Yalu and in November suddenly found himself fighting them as well as the North Koreans. The UN forces were pushed south again and in April 1951 a major Chinese offensive was launched on the River Imjin, aimed at the South Korean capital of Seoul. The stand made there by the ‘Glorious Glosters’, as the British press christened them afterwards, supported by the Centurion tanks of the Irish Hussars, helped prevent Seoul from falling again. It is generally recognised as Britain’s bloodiest battle since 1945. Thereafter the war entered a static phase and fighting eventually ceased in July 1953.

As for the Empire Windrush, she caught fire and sank in the Mediterranean in 1954 on the way home from Japan, but all her passengers, including recovering wounded from Korea, were saved. She might have been forgotten like her sister troopships, the Empire Fowey and the Empire Orwell, but her name lives on thanks to one trip she made back from Jamaica in 1948 carrying 492 West Indian immigrants, the first such sizeable party to come to England. Most thought they would stay only for a few years, but things turned out differently and, as the significance of their arrival grew and turned them into a symbol, the ship’s name became attached to it.