The Flowering of Scotland

David Torrance examines a pioneering article, first published in History Today in 1990, which argued that the Scottish Enlightenment was not restricted to Edinburgh but was a genuinely national phenomenon. 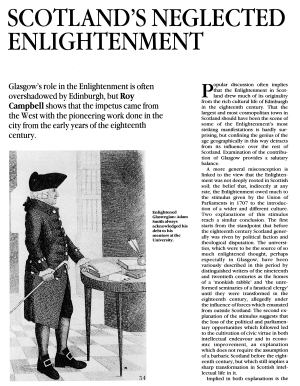 Roy Campbell’s essay, Scotland’s Neglected Enlightenment, was timely in that, just months after it appeared in History Today, the University of Strathclyde convened a memorable conference on ‘Glasgow and the Enlightenment’. From it emerged an important book, The Glasgow Enlightenment, by Richard B. Sher and Andrew Hook, which acknowledged Campbell’s essay as one of the first studies of the city’s intellectual importance.

‘Popular discussion often implies that the Enlightenment in Scotland drew much of its originality from the rich cultural life of Edinburgh in the 18th century’, wrote Campbell, ‘but confining the genius of the age geographically in this way detracts from its influence over the rest of Scotland.’ Examination of Glasgow’s contribution, added Campbell, provided a ‘salutary balance’.

That it did. In the following two decades historians came to recognise that the ‘Scottish Enlightenment’ was precisely that and not just the territorial manifestation of a wider European trend in the Scottish capital. It is surprising that this was ever in doubt, given that several of the Enlightenment’s leading figures – not least Adam Smith – worked at Glasgow University, while in its early stages Aberdeen’s colleges played a crucial role.

Yet in 1990 comparative scholarship was still in its infancy. The Edinburgh Enlightenment had been the focus of numerous studies and that in Aberdeen had spawned a formidable secondary literature but, as Sher and Hook observed in the introduction to their book, the Glasgow Enlightenment had ‘been virtually ignored’.

Ironically, the term ‘Scottish Enlightenment’ probably originated in William Robert Scott’s 1900 biography of a Glaswegian, Francis Hutcheson: His Life, Teaching and Position in the History of Philosophy. Scott was describing the period between the 1730s and 1790s when Scotland became one of the intellectual powerhouses of Europe. There were other Enlightenments, in Spain, France and Italy, at around the same time, but the Scottish Enlightenment was broader.

Its roots lay in Scotland’s four ancient universities, Glasgow, Aberdeen, St Andrews and – a little later – Edinburgh. Tom Devine, in his 2003 book Scotland’s Empire 1600- 1815, and others, reckoned the Glasgow-based Hutcheson (who turned down a post at Edinburgh) was particularly influential, in that he had taught the young Adam Smith, whose ideas permeated well beyond that city, Edinburgh and Scotland.

‘The Enlightenment at Glasgow … even more than at Edinburgh’, judged Hook and Sher, ‘appears to have been centred around the university.’ Indeed, Campbell’s essay is compelling in arguing that Glasgow’s academic input was particularly strong, having moved away from the traditional authority of scripture earlier than most. Glasgow’s greatest contribution, wrote Campbell, was its ‘remarkable line of distinguished philosophers’. ‘The hotbed of genius, which was appropriated by Edinburgh, had its intellectual foundations in the work in Glasgow,’ he wrote. ‘Glasgow led; Edinburgh followed.’

There has been another historiographical shift: whereas in the past the orthodox view, epitomised by Hugh Trevor-Roper and his followers, held that the Scottish Enlightenment’s main disciplines were moral philosophy, history and political economy, it is now recognised that science (mathematics, physics, chemistry, geology, medicine) was as important. Aptly, given Campbell’s thesis, Glasgow University’s Alexander Broadie fleshed out the supporting arguments in this respect, most recently in The Scottish Enlightenment (2001).

Campbell believed that even the Enlightenment’s philosophical achievements had been subordinated by its artistic legacy, something he controversially (his own word) thought reflected more ‘the introspective tendency of the Scot to limit his interest to the output of his own kailyard than to how the kailyard fertilised cultivation elsewhere’.

Two decades after Campbell’s essay the historical view of the Enlightenment extends beyond Edinburgh, and indeed Glasgow, to embrace all of Scotland, from Aberdeen in the north, St Andrews in the middle and its two great cities of the Central Belt. Rather than the ‘Edinburgh Enlightenment’ or ‘Glasgow Enlightenment’ it is more accurately the ‘Scottish Enlightenment’.