After the death of her husband in 1945, Eleanor Roosevelt left the White House and embarked upon a new career as ‘First Lady of the World’.

In February 1946 a group of men from the US delegation huddled at the United Nations General Assembly in London, attempting to make a quick decision about who would respond to the Soviet Union. Andrei Vyshinsky, leader of the Soviet delegation, had just delivered a scathing speech, catching the Americans off-guard. Vyshinsky made it clear that the Soviets would contest the UN Social, Humanitarian and Cultural Affairs Committee’s report on refugees, which set out a path for the UN to help the millions of displaced persons in Europe at the end of the Second World War. Were the Soviets successfully to stall progress on refugee issues, Europe would suffer. 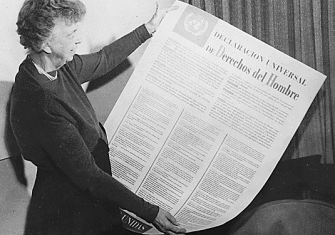