The exhibition that opened in Paris, on October 15th, 1905, 'shocked many who saw, and many more who did not.' 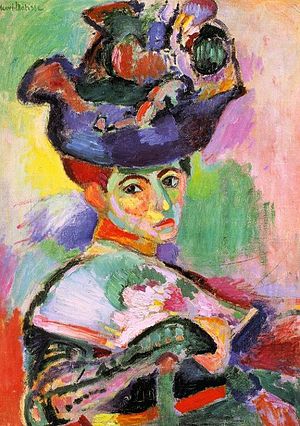 Writing of a sculpture in Renaissance style menacingly hemmed in by paintings by Matisse and others in Room VII at the Salon d’Automne in Paris in 1905, the critic Louis Vauxcelles, who would later coin the term Cubism, called it un Donatello parmi les fauves, ‘among the wild animals’. He made the comment originally to Henri Matisse himself and liked it so much that he repeated it in print in the magazine Gil Blas. The wildness lay in the lurid colours and aggressive execution of the paintings. Matisse’s portrait of his wife, ‘Woman in a Hat’, for instance, showed her with a face blotched with green, pink and yellow under a hairdo in brick red and cobalt blue, as well as a giant purple hat with multi-coloured feathers. André Derain’s portrait of Matisse had half the face in turquoise and crimson streaks in the beard, while the trees in Maurice de Vlaminck’s landscapes were blazing pink. Derain and Vlaminck were described as using their colours as if they were charges of dynamite and an alternative name for the Fauve painters was Incohérents.

The exhibition shocked many who saw it, and many more who did not. The impression that the paintings had been done to please the artists themselves rather than the critics was particularly upsetting. Trouble had started even before the exhibition opened. The Salon d’Automne had been established in 1903 to encourage experimental artists, but the Fauve paintings alarmed even the Salon’s liberal-minded jury and Matisse was strongly advised in his own best interests to withdraw ‘Woman in a Hat’. The head of the hanging committee, however, was the painter Georges Desvallières, an old friend and ally of Matisse, who made sure not only that the Fauve entries were included, but that they were hung together in the same room, which heightened their impact.

The Fauves had no manifesto and were held together by friendships and a need to move on from Impressionism. Matisse and Desvallières had been pupils of Gustave Moreau at the Ecole des Beaux-Arts in the 1890s. Matisse and Derain later took classes together and Derain and Vlaminck shared a studio in an abandoned restaurant in the Paris suburb of Chatou from 1900 and cheerfully squeezed the paint straight on to their canvases from the tubes, as much from sheer youthful exuberance as anything else. Vlaminck, who called himself ‘a tender- hearted savage, full of violence’, said he tried to paint with his heart and his guts without bothering about style. The dominating figure was Matisse, the oldest of the Fauves and by consent the most gifted, who was thirty-five. Derain and Vlaminck were still in their twenties. Another youthful recruit was Georges Braque.

Fauvism has been called ‘the first movement in modern art to benefit from scandal’ and the painters themselves realized that the publicity was good for them, though they did not feel easy with the name. ‘Woman in a Hat’ was bought by Gertrude Stein and her brother Leo, and the Fauves’ bright colours were promptly taken up by the smart fashion houses. The Fauves showed again at the Salon d’Automne of 1906. Kandinsky saw the exhibition and was much impressed, but the movement did not last long and Braque later remarked that you cannot live for ever in a state of crisis. Fauvism was soon overtaken by the development of Cubism in 1908.