The End of the Holy Roman Empire

The Holy Roman Empire had survived over a thousand years when it was finally destroyed by Napoleon and the French in 1806. 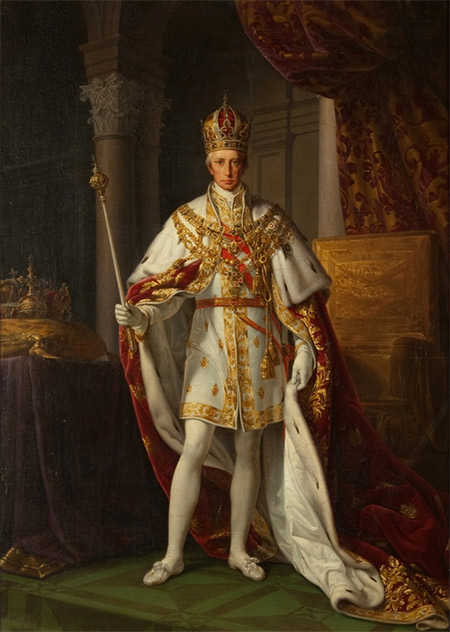 It may not have been holy or Roman or an empire, as Voltaire remarked, but whatever it was, it had survived for more than a thousand years since the coronation of Charlemagne in the year 800. A motley medley of more or less independent kingdoms, lay and ecclesiastical principalities and free cities, it was finally destroyed by Napoleon and the French.

The process began when the German territories on the west bank of the Rhine were annexed to France in 1801 under the Treaty of Lunéville, which the Hapsburg Emperor, Francis II, had no choice but to accept after the French victories at Marengo and Hohenlinden the previous year. The treaty provided for the German rulers who lost territory west of the Rhine to be compensated elsewhere in the empire at the expense of the ecclesiastical states.

East of the river, this allowed Napoleon to preside over a reorganisation, ostensibly carried out by a committee of imperial princes, which redrew the map of Germany, drastically reduced the number of petty states, secularized or destroyed the ecclesiastical ones and abolished most of the free cities. The French intention was to create a cluster of satellite states beyond the Rhine, organized in a more rational and controllable fashion, and the effect was to cut the number of the imperial states from more than 300 to fewer than 100 and severely diminish the authority of the Hapsburgs.

The larger German states were not at all unhappy to swallow their smaller neighbours. Both Austria and Prussia acquired some extra territory in the reorganization of 1803, but Napoleon made sure that the main gains went to states like Bavaria, Württemberg and Baden, which were not big enough to pose any threat to France.

In 1805 Austria joined yet another coalition of European powers against the French and at the end of the year Napoleon smashed the Austrian and Russian armies in battle at Austerlitz. He went on to organize the Confederation of the Rhine, which came formally into existence in the following July under his protection and in military alliance with France. Its ostensible leader was Karl Theodor, Freiherr von Dalberg, who was both Archbishop of Mainz and Grand Duke of Frankfurt. Sixteen German states joined the Confederation, which stretched from the Elbe to the Alps. It was a French vassal state and Napoleon announced that the Holy Roman Empire of the German Nation no longer existed. The confederate states formally proclaimed their secession from the empire on August 1st and on the 6th the Emperor Francis bowed to the inevitable, renounced the imperial crown which his forebears had worn in virtually unbroken succession for almost four centuries since Albert II in 1438 and retreated into being Hereditary Emperor of Austria.

The French diplomat Talleyrand recommended a French-Austrian alliance which would dominate Europe, but Napoleon was not interested. Later in 1806 he routed the Prussians at Jena and took Berlin, where he decreed a blockade of British trade. Saxony saw the light and joined the Confederation of the Rhine. The insatiable Bonaparte went on to create a new kingdom of Westphalia for his brother Jerome and coax or bully all the German states except Austria and Prussia to join the Confederation, where they found themselves under a far more ruthless master than they had ever known before. Napoleon sarcastically remarked that Germany was always ‘becoming, not being’, but in the long run, ironically enough, the consequence of his policies would be the stimulation of German nationalism and the emergence of a united Germany which would humble the French in the two World Wars.