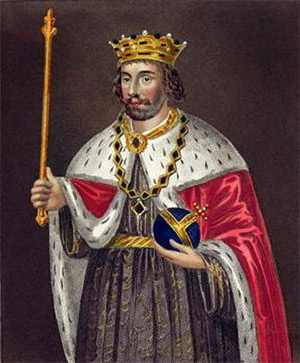 The royal pair were not well matched. Edward was tall and handsome, but his father was a hard act to follow and he was criticised for being cowardly, light-minded, extravagant, too much given to drinking and gambling and already under the spell of his Gascon favourite Piers Gaveston. War and fighting made no appeal to him and it was widely believed that he was homosexual. Some of the French who attended the coronation reported that he seemed to be more attracted to Gaveston than to his new wife. It was not until 1312 that Isabella gave birth to her first child, the future Edward III. She later bore a second son and two daughters.

Unlike her husband, Isabella, ‘the she-wolf of France’, had inherited her father’s ruthlessness. In 1321, denied entrance to Leeds Castle on some pretext, she ordered her escort to force the gate and when they failed insisted on her husband having the castle taken by storm and thirteen of the garrison hanged on the spot. She did her best to mediate between her husband and his antagonistic barons, but like them she detested his later favourites, the two Despensers. She secretly gathered round her a group of conspirators including Roger Mortimer of Wigmore, who became her lover. Sent to Paris in 1325 on a mission to her brother, Charles IV of France, she craftily succeeded in getting her eldest son, Prince Edward, sent to join her in France and the stage was set for a successful coup in 1327 in which Edward II was deposed and replaced by his son, while England was run by Isabella and Mortimer. Edward II was brutally murdered at Berkeley Castle with a red-hot poker in a manner considered appropriate to his sexual preferences and his embalmed heart was sent to Isabella, who received it with ostentatious sorrow. Edward III soon took charge and had Mortimer executed. He kept his mother well out of the way in a long and comfortable retirement which lasted until until her death in 1358.