Death of John of Gaunt 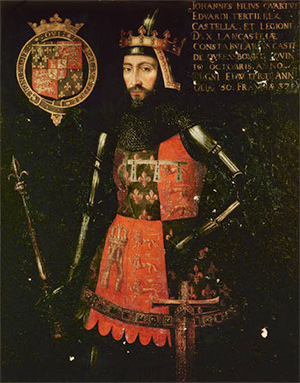 'Old John of Gaunt, time-honoured Lancaster', who breathed his last in Leicester Castle on February 3rd, 1399, at the age of fifty-eight, was the son of Edward III, the brother of the Black Prince, the uncle of Richard II, the father of Henry IV and the grandfather of Henry V. Duke of Lancaster and a claimant to the throne of Castile, John of Gaunt (he was born in Ghent in 1340) was the richest nobleman and the greatest subject in England, the owner of huge estates and no fewer than thirty castles. His duchy was almost an independent state and at more or less a snap of the fingers he could raise 1,000 men-at-arms and 3,000 archers. He loved hunting and is reputed to have killed the last wild boar in England, near Rothwell in Yorkshire.

Tall and well-built, he was an ardent pursuer of women, too, as well as the patron of Chaucer and John Wycliffe and the Carmelite friars. According to his biographer Anthony Goodman, Gaunt was possibly the most hated man in England, and he was a major target of the Peasants' Revolt of 1381, when his luxurious palace of the Savoy in London was burned. He was inevitably an object of fear and suspicion to his overstrung, fastidious nephew Richard II (one of the first people ever to use a handkerchief, to general astonishment), who tried to inveigle him out of England altogether and away to France as Duke of Guyenne.

On September 16th, 1398, Gaunt was at Coventry, with a large crowd which had gathered to watch a trial by battle between his son and heir, Henry Bolingbroke, and Thomas Mowbray, Duke of Norfolk, who had quarrelled so bitterly with mutual accusations of treason that the royal council had decided they would have to fight it out. At the last moment, when the two combatants appeared in the lists arrayed in magnificent armour ready to fight to the death, King Richard intervened, forbade the combat and banished both of them. Bolingbroke went to Paris, where he thought of going on crusade, but changed his mind, apparently having been told by the doctors that his father had not long to live. According to the earliest account of the Duke's last days in Leicester Castle, written in Scotland twenty years later, he took to his bed in 'a languor', partly caused by grief and anxiety over his son's exile. Richard visited the sick man and spoke him fair, but left with him some private documents. Whatever was in them, soon after they were read to him, he expired. Another account, not written until the 1440s, has the dying Gaunt showing the King how his genitals had rotted away with disease because of his insatiable appetite for women. His body was taken to London and buried in St Paul's Cathedral on March 16th, which was Passion Sunday.

Two days after the funeral, Richard made Bolingbroke's banishment perpetual, but he had little time left himself. Bolingbroke returned in force in July 1400, seized the throne as Henry IV and had Richard murdered. Henry VII's claim to the English crown in 1485 ran back through John of Gaunt, and in Elizabeth I's time the Jesuit Robert Parsons argued that Philip II of Spain was the rightful monarch of England through his descent from Joaõ I of Portugal, who had married Gaunt's daughter Philippa. In Shakespeare's Richard II, however, it is Gaunt who speaks for England and the thrilling speech on 'this royal throne of kings, this sceptered isle...this precious stone set in a silver sea' is placed in his mouth. 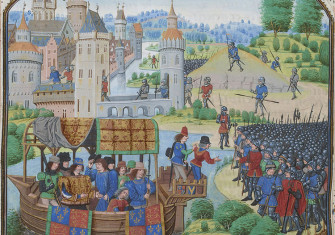