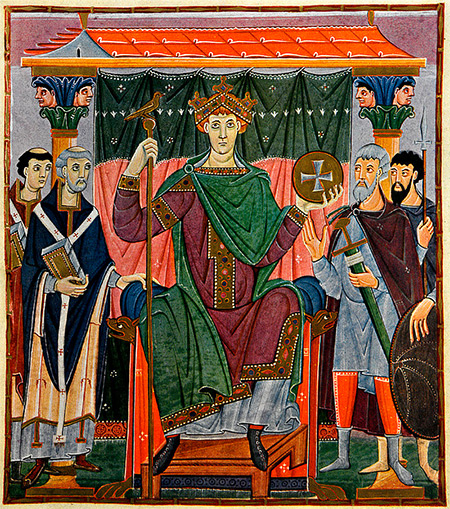 Otto III succeeded to the throne of the Holy Roman Empire at the age of three, which did not give him a promising start. He was crowned at Aachen on Christmas Day 983, soon after the premature death of his father, Otto II. The child was promptly seized by the warlord of Bavaria known to history as Henry the Quarrelsome, but after a few months Henry surrendered the little boy to his mother, Theophano, who effectively ruled the empire (her name was sometimes masculinised to Theophanius in official documents) until her death in 991.Theophano was a beautiful and strong-minded Byzantine princess, who regarded the westerners with whom her lot was cast as primitive barbarians. Her influence may have helped to form Otto’s high concept of his own destiny, which was encouraged by his tutors, who included the cultivated French cleric Gerbert of Aurillac.

Coming of age at fourteen in 994, Otto determined to recreate the Roman Empire of old as a universal Christian state of which he would be the supreme spiritual and temporal potentate. In 996 he crossed the Alps into Italy. The papacy was at a low ebb and Pope John XV conveniently died at this point. Otto marched to Rome and installed his young chaplain and relative Bruno as Gregory V. Gregory, who was in his twenties and the first German pope, duly crowned Otto as Roman Emperor in May, but as soon as Otto returned to Germany, Gregory was ousted and replaced by a rival, John XVI.

Otto returned to Rome in 997, reinstalled Gregory and made Rome his capital, which would displease the Germans and entangle him in fierce Roman factional politics. Elaborate Byzantine court ceremonials were introduced to create a suitably elevated tone and the emperor appeared on state occasions in a mantle sewn with 365 bells for the days of the year, a gown embroidered with golden eagles and shoes stitched with imperial eagles, dragons and lions. He tried to run the empire in Germany as well as in Italy from Rome with a coterie of Italian advisers and officials. When Gregory V died in 999, Otto put Gerbert of Aurillac on the papal throne as Sylvester II – a significant name. The first Sylvester had been pope to Constantine the Great.

On his father’s side, Otto was a Saxon and a descendant of Charlemagne. In the year 1000 he made a pilgrimage to Charlemagne’s tomb at Aachen, which was opened for him. The great emperor was revealed sitting on a throne, crowned and sceptered, and surprisingly well preserved. The young Otto reverently pared his renowned predecesor’s fingernails, which had grown through his gloves, and took away one of his teeth for luck. It did not bring good fortune, however, for the following year there was a rebellion against Otto in Rome and he was besieged in his palace. Disappointed at Roman ingratitude, he retreated to Ravenna and sent for help to a cousin, Henry of Bavaria, who had succeeded his father, Henry the Quarrelsome. Bavarian troops were sent, but Otto died of smallpox at his headquarters at Paterno before they arrived. He was twenty-two. He was buried at Aachen and Henry of Bavaria succeeded him as emperor.