The Death of Alexander II of Scots

Alexander II died on July 8th, 1249, aged fifty. His reign was often later remembered in Scotland as a golden age. 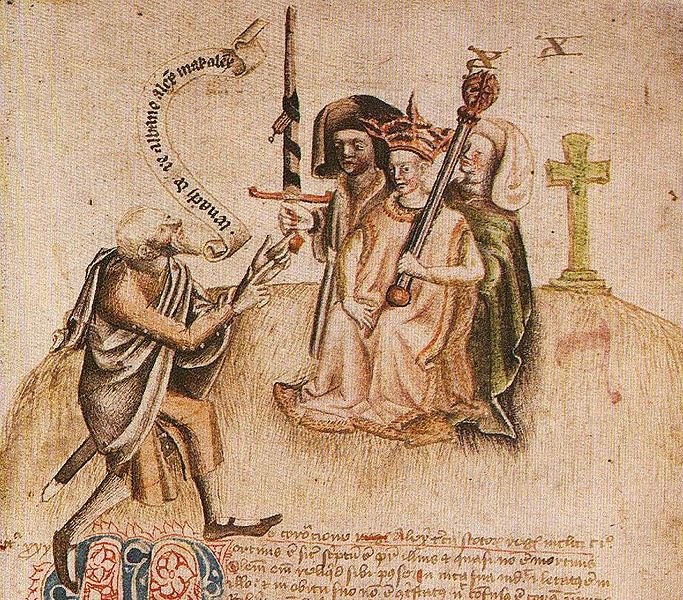 The kings of Scots of the old Celtic line were plagued in the thirteenth century by a persistent inability to breed male heirs. William the Lion, whose reign lasted fifty years till his death in 1214, was well into his middle fifties when his son and heir, the future Alexander II, at last arrived. Alexander was sixteen when he took his place on the hallowed coronation stone at Scone - according to legend, it was the stone on which Jacob slept at Bethel when he dreamed of angels going up and down between heaven and earth - and the King's lineage was ceremoniously recited all the way back to Kenneth MacAlpine and beyond him to Scota, the daughter of Pharaoh. However, Alexander had been associated with his father in the kingship since he was fourteen and proved to be a thoroughly capable ruler.

Alexander was at once threatened by his relatives, the MacWilliams, descended from King Duncan II, who had been murdered in 1094. They believed they had a better right to the throne than the incumbents, had already made attempts to attain it, and had no shortage of male heirs. Now, in 1215, Donald Bane, a great-grandson of King Duncan, rose in the north, but he and his supporters were quelled by a powerful Celtic lord, Farquhar MacTaggart, who sent Alexander the severed heads of the rebels as a present. Alexander was less Norman-oriented and more Celtic in his sympathies than his father and this support from a Celtic lord was significant.

It was a brutal age and in the 1220s Alexander would have the hands and feet of eighty men of Caithness cut off to punish them for roasting their bishop alive, while another challenge from the MacWilliams in 1230 would end with the brains of the challenger's baby daughter being beaten out against the market cross in Forfar.

Alexander meanwhile had no baby of his own. He had married Joan, the eldest sister of Henry III of England, but the years went by and there were no children. The nearest male heir was Alexander's cousin, John, Earl of Huntingdon, but he died in 1237, childless. The English kings had already laid claim to being Scotland's suzerains and the situation was so threatening that, apparently, it was decided that if Alexander died without a son, his successor would be Robert Bruce, lord of Annandale, as the nearest male in line. Or so the Bruces were to claim.

When Queen Joan died in 1238 on a visit to England, Alexander took the opportunity to marry again. He chose a French lord's daughter, Marie de Coucy, and in 1241, to what must have been the huge relief of them both, she presented him with an heir, the future Alexander III, who was to be their one and only child. The king, who had extended his effective sway to both Galloway and Argyll, with assistance from Farquhar MacTaggart, now set out to buy the Western Isles from their ruler, Haakon IV of Norway. The offer was not accepted and in 1249 Alexander gathered an invasion fleet. He had got as far as the island of Kerrera, across the water from Oban, when he fell sick of a fever and died. He was fifty years old, and the isles would remain virtually independent until the seventeenth century.

The heir, Alexander III, was a boy of seven, and was ten when he was married to Henry III's eleven- year-old daughter, Margaret. He grew up to be one of the best kings of his line, but all his children died in his own lifetime and when he himself was killed in a riding accident in 1286 his successor was his baby granddaughter, known as the Maid of Norway. She died only four years later and the way was wide open for the ruthless Edward I of England to intervene, claiming to be Scotland's overlord, and to sort out the succession. The intervention was unsuccessful in the end, but it led to centuries of intermittent war, and Scots in later times looked back to the reigns of Alexander II and Alexander III as a golden age.