Is Britain more European than it thinks?

Britain’s recent disputes with the European Union are part of a long historical narrative, argues James Ellison – but it is not the whole story. 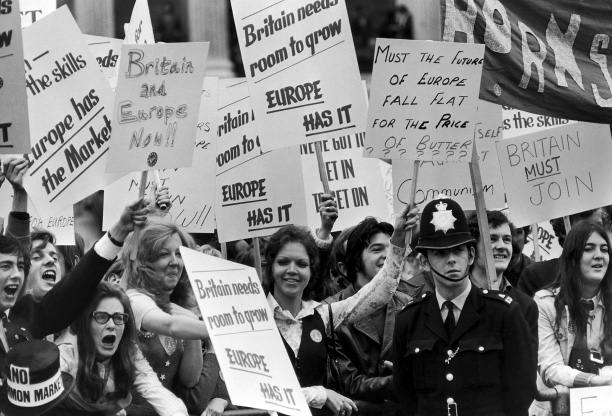 There is the old joke about British reports of ‘Fog in the Channel – Continent cut off.’ The ‘fog’ is now thicker and perhaps even more hazardous than it was. David Cameron’s veto last December during the Eurozone crisis gave it an unhelpful and familiar ‘Britain versus the EU’ dimension as Europe faced its darkest economic moment since the Great Depression. While Angela Merkel and Nicolas Sarkozy tried to pump blood into the collapsing veins of the euro, Cameron’s demands for City of London safeguards appeared self-centred and anti-communautaire.

The French hit back. Sarkozy told Le Monde: ‘There are clearly now two Europes.’ No code there: there is the EU and there is Britain. Merkel was more emollient, telling the Bundestag that it is ‘beyond doubt that Britain will remain an important partner in the EU’. As long as the euro survives this crisis will be put down to experience, like others in the EU’s past. What Cameron asked for was neither unreasonable nor unexpected to those in the know, it was just that he asked for it undiplomatically and at the last moment. The real fallout from these events is that they reaffirm a damaging and distorted history of Britain and Europe. But there is another story to tell.

Let us first reprise the tired narrative of Britain and Europe. Of the contenders for the title ‘Father of Europe’, a short French economist, planner and statesman, Jean Monnet (1888-1979), stands tall. He laid the foundation stone of the EU after the Second World War and wanted the British in from the beginning. Alongside Charles de Gaulle, Monnet travelled to London amid the drama of June 1940. He took with him a proposal for ‘indissoluble union’ between Britain and France, but the plan fell with Petain’s submission to the Nazis. Preventing future Nazis was in part the stimulus for Monnet to write the Schuman Plan of 1950. Named after Robert Schuman, then the French foreign minister, it called for a coal and steel union in western Europe to neutralise historical enmities. Monnet ensured that the British received an invitation to join, but they demurred. One of Monnet’s compatriots recalled the British saying: ‘You in Europe have been defeated, you have been occupied; that is not our situation.’

When the six Schuman Plan countries – Belgium, France, Germany, Italy, Luxembourg and the Netherlands – built on their success with the creation of the European Economic Community (EEC) in 1957, Britain’s position looked like hubris. The British dismissed the Six’s chances leading up to 1957. Rab Butler, former Chancellor of the Exchequer, even described their plans as ‘archaeological excavations’. Yet in 1961, eating partly digestible humble pie, Harold Macmillan’s government decided that Britain had no alternative but to seek membership. The economic imperative was strong – Britain needed a new sense of purpose and economic growth – but so too was an age-old British strategy: no one nation could be allowed to dominate the Continent. Macmillan warned privately of the danger that, through the EEC, the Germans would revive their power: ‘It is really giving them on a plate what we fought two world wars to prevent.’

Yet it was not a German who dominated Europe as Britain tried to get into the EEC, but a Frenchman. General de Gaulle blocked two British applications to join the Community. In saying ‘non’ to the first in January 1963 he stated that Britain was ‘insular’ and ‘maritime’ and set apart by ‘habits and traditions’. He maintained his position throughout the 1960s. Indeed one reason that Britain could enter the EEC on January 1st, 1973 was that de Gaulle had left office in 1969. At last Britain was European, or so it was hoped by Edward Heath’s government. Horizons of economic revival and political rebirth stretched out, but sadly not for Heath who was a casualty of Britain’s mid-1970s malaise. Part of the country’s identity crisis at that time came from Harold Wilson’s decision to put EEC membership to the public in a historic referendum 18 months after entry; the overwhelming ‘yes’ vote of June 6th, 1975, however, did not end the debate.

This story of British ambivalence towards Europe is well-entrenched in the national mind and also those of EU member states, hence the vituperate tone of recent  criticisms of Britain. Like British leaders before him, Cameron has been accused of asking for something, while offering nothing in return. As a former Belgian MP said: ‘You’re either at the table or you’re on the menu.’

The British have always wanted to be at the table. It has just taken a while to get there and they have not found the seat that comfortable. In 1897 Prime Minister Lord Salisbury believed that the ‘Federation of Europe is the only hope we have’ to avert European war. That has not changed. Indeed, it is why the first post-1945 Labour government pursued Anglo-European unity, before the Cold War prioritised Anglo-American co-operation. Throughout the 1950s and 1960s Britain’s European policy, though short on supranationality – the leitmotif of the Six – was purposeful. After entry, Britain worked as a member state to further the EC and rigorously applied European legislation. To this day Britain functions as a nation whose greatest interests are European. Trade figures, financial ties, international politics and, to an extent, law all point that way. So does the fact that so many Brits holiday in Europe. Yet the country is not at peace with this reality.

Monnet once gave an explanation for Britain’s predicament. ‘I never understood why the British did not join,’ he said. ‘I came to the conclusion that it must have been because it was the price of victory – the illusion that you could maintain what you had, without change.’ The Second World War also cut a much deeper cultural scar on the nation. In 1949, when British diplomats debated a future in Europe, one Labour minister was unequivocal: ‘Anti-European feeling is a commonplace of British thought. Everyone has relatives in the US and Canada. Most have no one in Europe except the dead of two wars.’ Sixty years later that sentiment may no longer be entirely correct, but it remains powerful and may have been revalidated by failed diplomacy. Unless we understand why imagery from the Second World War has been used in Britain over Cameron’s veto – the PM showed ‘bulldog spirit’ – and why this latest spat between Britain and Europe is more atypical than many think – the untold story is more about co-operation than conflict – the relationship between the British and their European partners will be imprisoned in the past.

James Ellison is Reader in International History at Queen Mary, University of London and author of The United States, Britain and the Transatlantic Crisis: Rising to the Gaullist Challenge 1963-68 (Palgrave Macmillan, 2007).