The creator of the world's most widely spoken constructed language was born on December 15th, 1859. 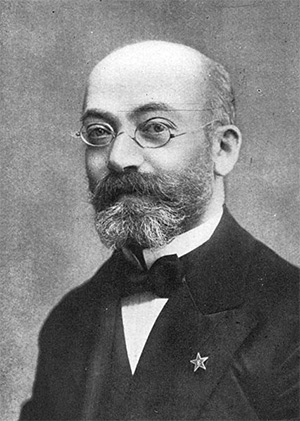 The creator of Esperanto was born to a Jewish family in Bialystok in Poland, then under Russian rule. He was given the Hebrew name Eliezer, or Leyzer in Yiddish, which later mutated into Lazar or Lazarus and eventually to Ludovic or Ludwig. Zamenhof is the Esperanto version of his original surname. His father was a gifted linguist who had just opened a language school in Bialystok and the little boy followed his father’s lead. He grew up speaking Russian, Yiddish and Polish, to which he later added German, Hebrew, Latin, French, English, Greek and some Lithuanian, Spanish and Italian.

Bialystok’s population consisted of Poles, Jews, Germans and Russians. The tensions and suspicions between them were only too evident to Ludwig and his family, who later moved to Warsaw. Already as a schoolboy young Zamenhof started trying to fashion an international language. He believed that if people spoke the same language they would understand each other better and the entrenched hatreds between different groups would melt away.

After university in Moscow and Warsaw, Zamenhof became a doctor in Lithuania and later an ophthalmologist in Vienna and Warsaw, but he continued his linguistic work and in Warsaw in 1887 he published a 40- page booklet in Russian on his international language under the pseudonym Doctor Esperanto (‘Doctor Hopeful’), which became the language’s name. For a time he was a supporter of Zionism, but he changed his mind and in 1914 wrote that he was ‘profoundly convinced that every nationalism offers humanity only the greatest unhappiness’.

The first Esperanto magazine came out in Germany in 1889 and a formal organisation formed in the 1890s. The movement’s first international congress was held at Boulogne in 1905 and the Universal Esperanto Association, based in Rotterdam, was founded in 1908. Estimates vary, but there are said to be currently over a million Esperanto speakers all over the world. Zamenhof himself was 57 when he died in Warsaw in 1917. He and his wife Clara had three children, all of whom perished in the Holocaust.