During the Cold War, nearly a quarter of all the world’s nuclear testing took place in Kazakhstan, in secret. In 1986, a high-profile disaster in Ukraine changed that. 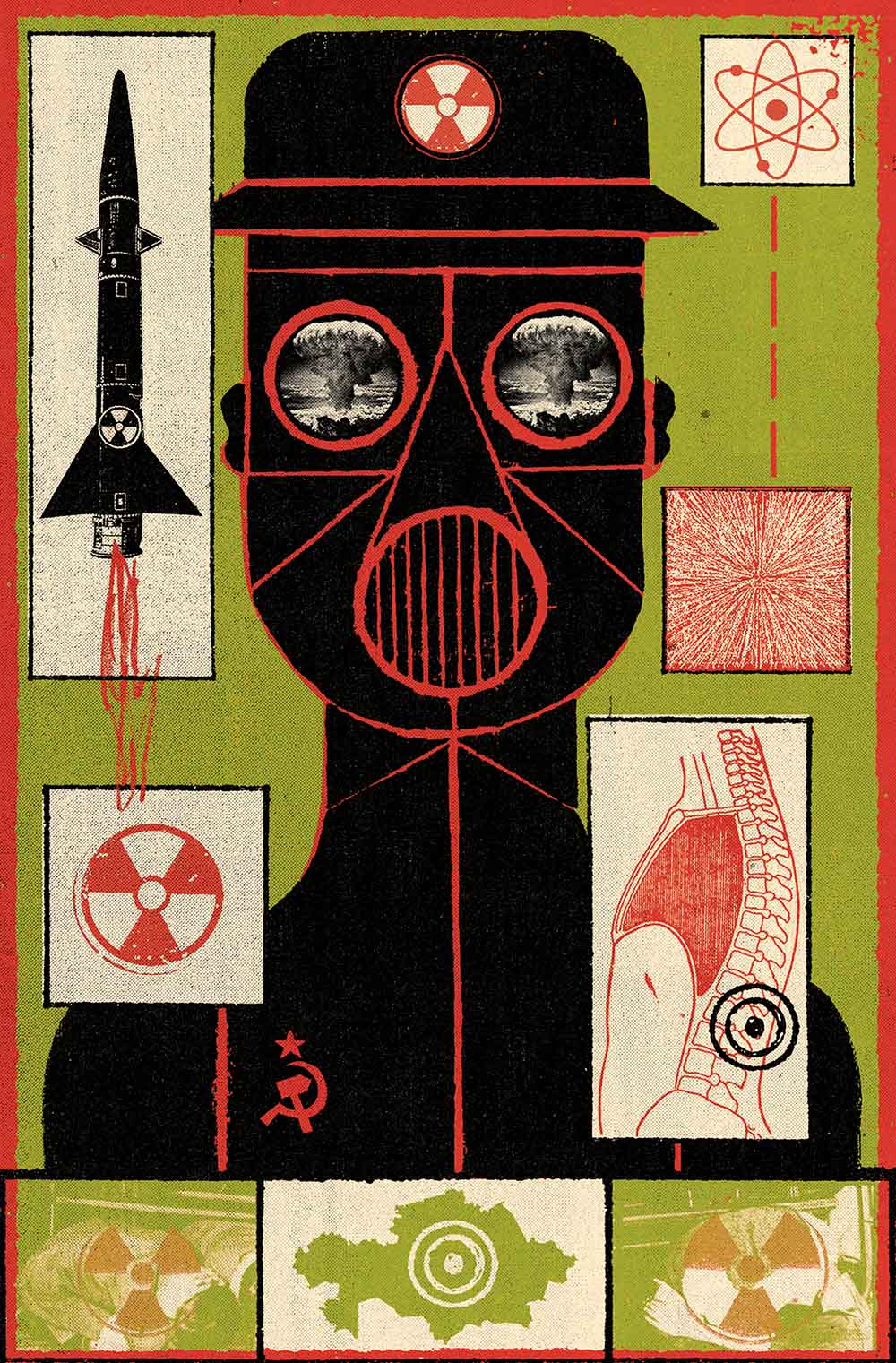 Seventy years ago, an explosion in a far-flung corner of Soviet-ruled Kazakhstan set off an arms race that took the world to the brink of nuclear Armageddon. Four years earlier, the US had ended the Second World War by dropping atomic bombs on Japan. Joseph Stalin’s USSR was hellbent on catching up.

The blast at the Kremlin’s secret Semipalatinsk nuclear testing site, which rocked Kazakhstan on 29 August 1949, was the first of 456 atomic explosions conducted there over the next 40 years. Codenamed Pervaya Molniya (First Lightning) by the Soviets and Joe-1 by the Americans (after ‘Uncle Joe’, their nickname for Stalin), the first explosion released 22 kilotons of nuclear energy, or 22,000 tonnes of TNT, into the atmosphere. Over the next four decades, the bombs detonated at Semipalatinsk released energy 2,500 times greater than the bomb dropped on Hiroshima in 1945. It was that ruthless display of US military might that launched the Cold War arms race with Washington’s new rivals in Moscow, as the panicked Soviets – helped by spies within the US arms programme – scrambled to split the atom and become a superpower in the newly polarised world.

Today, villagers living around the Polygon, the Russian word for ‘test site’, which became synonymous with Semipalatinsk, have traumatic memories of mushroom clouds exploding on the horizon during their childhood. ‘We’d be sent outside, and we’d crouch in ditches. We saw mushroom clouds: big and terrifying ones’, recalled an old lady called Galina Tornoshenko, born in 1949, the year of the first nuclear test. ‘I was small at the time, but I remember it well.’

In 2016, she shared her memories with me in a village called Znamenka, a dot on a flat, snowy landscape. It was a dazzlingly sunny but bitterly cold winter’s day in March (spring comes late to this part of Kazakhstan, just south of Siberia). Many villagers told similar tales, although since the Soviets concealed the existence of the Polygon and lied about the nature of the blasts, it was only with hindsight that they recognised what they had experienced. ‘On the radio they’d say: go out into the streets, there’s going to be an earthquake,’ a villager called Serikkazy Baribayev told me, explaining how people would be ordered outside ahead of the explosions. The tests moved underground after a ban on atmospheric testing in 1963, into tunnels bored into some nearby mountains. His friend remembered teachers covering children with felt during the blasts, in an attempt to protect them from what locals had begun to suspect was a health hazard – even if they had no idea they were being exposed to life-threatening doses of radiation.

During the Cold War, the existence of the Polygon in Kazakhstan near Semipalatinsk was top-secret. Its HQ was in a town named Semipalatinsk-21, shown on Soviet maps as Konechnaya, meaning ‘Last Stop’. Most people had no idea the nuclear test site was there and anyone harbouring suspicions about the explosions on their doorstep was advised to keep quiet. ‘Whether you’re afraid or not, you have no choice – if you speak out, they’ll soon close your mouth!’, said Seysenbey Zhantemirov, a Semipalatinsk resident who recalled being sent flying into the air by what he now knows was a nuclear blast in the 1970s.

How did the Soviets select Semipalatinsk as their test site? Casting around for a suitable spot, they settled on the north-east part of what was then the Kazakh Soviet Socialist Republic, one of 15 Kremlin-ruled entities making up the USSR. Stalin’s henchman Lavrentiy Beria, the secret police chief in charge of the atomic weapons programme, breezily declared the area ‘uninhabited’. He was wrong: the 18,500-square-kilometre Polygon lay in Kazakhstan’s industrial heartland, 120 kilometres from the city of Semipalatinsk (now Semey), within striking distance of other towns in Kazakhstan and southern Russia and near many rural communities. Their inhabitants became human guinea pigs in a disastrous atomic experiment, as the blasts hurled radioactive fallout over northern, eastern and central Kazakhstan and Russian Siberia, exposing hundreds of thousands of people – at a minimum – to toxic radiation. A research centre, innocuously named Anti-Brucellosis Dispensary Number 4, which ostensibly studied an infectious disease found in cattle, actually existed to research how radiation affected the human body.

Almost three decades after the Polygon was closed, the full impact of the blasts on human health and the environment remains unknown. Information lies buried in archives in Moscow, which takes no responsibility for the legacy of nuclear testing on its former colony and its people. Available evidence suggests the tests caused spikes in many types of cancer and other diseases and disorders. Studies also suggest that victims of nuclear testing in Kazakhstan suffer from hibakusha, the Japanese word for the psychological trauma endured by survivors of the bombs dropped on Hiroshima and Nagasaki. Nuclear testing at Semipalatinsk destroyed the lives of people not even born when they ceased in 1989, when a moratorium was imposed on testing.

Zhannur Zhumageldina is one. She was born in a village called Olzhabay in 1992, the year after the Polygon closed down completely, suffering from microcephaly, a neurological condition which hampers brain development, and kyphoscoliosis, curvature of the spine so severe that she is paralysed. When Zhannur was diagnosed with these radiation-related conditions, her mother Mayra had never heard of the Polygon. But it had been exploding nuclear bombs nearby for her whole life, which has been irrevocably shaped by the fallout. ‘I didn’t even know the Polygon existed until Zhannurka was 15 months old’, she said, using her daughter’s pet name as she massaged her immobile limbs to prevent them from seizing up. ‘Everyone said I should abandon her – the doctors, my husband, my mother-in-law. I said: no, I’m going to look after her.’ Now a single mother, Mayra has spent every day of the last 27 years caring for her disabled daughter, eking out a living on disability benefits in a small, state-subsidised flat in Semipalatinsk.

In the Soviet Union, dissent was forbidden. Debating the pros and cons of the Kremlin’s atomic weapons programme or its use of nuclear power was totally taboo – until an accident 4,000 kilometres away from Semipalatinsk, on the other side of the USSR, made the atomic topic explode into the public consciousness.

‘The odds of a meltdown [at a Soviet nuclear power plant] are one in 10,000 years,’ Vitaliy Sklyarov, the minister of power in Soviet-ruled Ukraine, stated confidently in February 1986. Two months later, Ukraine’s Chernobyl atomic power station went into meltdown, causing what has gone down in history as the world’s worst nuclear disaster.

On 26 April 1986, the power plant’s reactor exploded, scattering radiation for thousands of kilometres and killing at least 31 people in the immediate aftermath. The Kremlin tried to cover it up, only admitting what had happened when elevated radiation levels were detected in Sweden, two days after the blast. The authorities had just begun a belated evacuation of local people. We still do not know how many fell ill or died – or will die – as a result of radiation exposure from the Chernobyl catastrophe. Studies have put the figure anywhere from 4,000 to 200,000.

The Chernobyl tragedy put the nuclear debate on the agenda in the USSR, where a policy called glasnost (openness) launched by Mikhail Gorbachev – the reformer who would preside over the USSR’s collapse in 1991 – was under way. Glasnost lifted taboos on debating controversial aspects of life in the Soviet Union – including its nuclear programme. The impact of glasnost was felt in Kazakhstan, where a groundswell of opposition to nuclear testing arose, fuelled by revelations of a radioactive gas leak from Semipalatinsk in 1989. An anti-nuclear movement emerged, called Nevada-Semipalatinsk (after the Soviet and US test sites) and headed by a poet, Olzhas Suleymenov, who led public rallies against nuclear testing. The movement secured the backing of Kazakhstan’s most powerful politician, Nursultan Nazarbayev, then a rising star in the Soviet political establishment, who became the Kazakh republic’s Kremlin-appointed leader in 1989. After leading Kazakhstan to independence in 1991, he ruled for three decades until his resignation in March 2019.

On 19 October 1989, Semipalatinsk exploded its last nuclear device, four decades after testing its first and having staged nearly a quarter of all nuclear tests conducted in the entire world. On 29 August 1991, two years after the moratorium was imposed on testing at Semipalatinsk, and with the Soviet Union collapsing and Kazakhstan’s independence beckoning, Nazarbayev closed the Polygon forever. He also agreed to give up Kazakhstan’s nuclear arsenal – the world’s fourth largest, consisting of 1,410 warheads, as well as tactical weapons. The rest of the world sighed with relief as a proliferation threat was removed in the new post-Cold War world.

Today, Kazakhstan brands itself as a global leader in nuclear non-proliferation, with its flagship project ATOM: ‘Abolish Testing – Our Mission’. ATOM’s ambassador is Karipbek Kuyukov, an artist who paints with his feet and mouth because he was born without arms as a result of exposure to radiation from Semipalatinsk. The nuclear tests stopped 30 years ago, but life stories like his are an expressive reminder that, for Kazakhstan and its people, their legacy will linger for decades, if not centuries.

Joanna Lillis is the author of Dark Shadows: Inside the Secret World of Kazakhstan (I.B. Tauris, 2019). 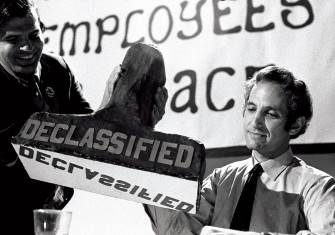 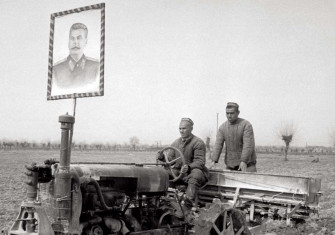